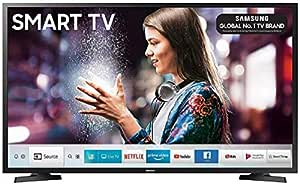 by Samsung
4.3 out of 5 stars 520 ratings
| 487 answered questions
10 Days Replacement
1 Year Warranty
1 Year Warranty
1 year comprehensive plus 1 year additional warranty on panel
Currently unavailable.
We don't know when or if this item will be back in stock.
› See more product details
Save up to 28% with GST input credit

Enjoy Concert like experience with 40W and 4 Channel speakers surround sound. Experience stunning picture quality with bright pictures, rich colors and crisp details. Samsung SmartThings App allows seamless screen and sound convergence using just one App. You can use the TV as a Bluetooth speaker or easily connect your TV to any Bluetooth sound system with our Bluetooth 2-way audio feature. Most intuitive and easy to navigate interface along with access to bouquet of online content in more than 15000 titles and more than 10 languages from international and Indian partners.

4.3 out of 5 stars
4.3 out of 5
520 customer ratings
How does Amazon calculate star ratings?
Amazon calculates a product's star ratings based on a machine learned model instead of a raw data average. The model takes into account factors including the age of a rating, whether the ratings are from verified purchasers and factors that establish reviewer trustworthiness.

Asit Kumar De
3.0 out of 5 stars Good budget TV, customer service is bad
Reviewed in India on 1 January 2019
Size name: 43 InchesVerified Purchase
Picture quality: The TV itself is decent - good picture quality for the price. Viewing angles are very good, but loses color saturation at extreme angles. The colors are okayish, but not very punchy. The panel has a resolution of 1920x1080, and the pixel density is good enough so that you really don't notice the pixels from a distance.

HDR: The TV advertises itself as HDR, but keep in mind that the panel does not reach the adequate brightness level to properly display HDR content. It also loses details at the blacks, and lacks local dimming. What this means is that the processor in the TV can decode HDR10 encoded signals, but you'll not see much difference between SDR and HDR content. HDR10 specs require that panels reach a brightness of 1000nits to properly display HDR content, while this TV only manages around 300nits.

Sound: Sound is better than other TVs in this range, due to its 4x 10W speakers. It is adequate for small rooms, although it doesn't have that much bass. You're probably better off with an external speaker system or a soundbar.

Smart features: The TV has a Samsung Tizen based TV OS installed, which is a bit slow. You have/can install apps for Netflix, Prime Video, Google Play Movies, YouTube, etc. I have only used Netflix and Prime Video and they seem to work just fine. You can connect the TV to the Internet via wi-fi or wired ethernet. I haven't encountered streaming issues over N300 2.4Ghz wifi (on a 60dn/10up broadband) connection; YMMV. There are no dedicated Netflix/YouTube etc. buttons on the remote.

Ports: There are 2 HDMI ports (only 1 has ARC), 1 USB port, 1 optical audio (SPDIF) port, 1 RF coaxial port, 1 RJ45 ethernet port, Y/Cb/Cr ports and component AV ports. The TV does not have an in-built digital TV tuner/set-top box or a CAM-card slot. If you are looking for that feature, do not buy the TV online, but get the store variant (43N5370). Note that N5300 is the online model while N5370 is the retail store model. They are identical except that the N5370 has that CAM-card set-top box feature and will cost you around Rs 6000 more than the online model.

Build quality: The body is made of plastic. The covers for the leg stands are of bad quality, and one of the plastic locking tabs broke while taking it off.

Wall mount: This is not mentioned anywhere, but the TV supports a VESA mount of 200x200.

Installation and customer service: This is the only bad experience that I had. I was initially told that Samsung will provide a free wall mount during installation. However, due to a recess in the wall, a standard fixed mount wouldn't have worked and I required an extended/articulating wall mount, which, I was told that I would be provided with, if I paid Rs 2000 extra. However, just in case, I purchased my own articulating wall mount. After the TV had been delivered, I received a call from a Samsung installation guy, and I told him about my mounting issue. At first he said, he will only install a standard mount, and he will not provide an articulating mount. When I told him that I already have my own mount, he straight up refused to install it! His reason was they are not allowed to install customer's products, while at the same time, he refused to provide one himself. I ended up wall mounting the TV myself. I am taking two stars off because of this.

Some tips: 1) Reduce the sharpness to a minimum, otherwise the picture looks over-sharpened IMO. 2) Turn off the Auto Motion Smoothing in expert picture settings if you do not like the 'soap-opera effect'.

Siraj
4.0 out of 5 stars Everything within a decent budget....
Reviewed in India on 18 October 2018
Size name: 49 InchesVerified Purchase
This is a wonderful TV particularly for the cost at which its is offered. I bought this for 37.5k after exchanging my old Samsung 32 inch full HD LED TV. This one is worth the money. Excellent picture and sound quality. Smart features are also good. Comes with preloaded apps that we may regularly use. Screen mirroring works seamlessly. Bluetooth two way is superb. Basically there is very little that you cannot do with this TV. If you're upgrading from 32 to bigger screen, the price at which this is offered makes the TV more value for the money spent.

About Delivery:
Was delivered on promised time (in fact within 1 hour from the range specified - supposed to be delivered between 12 to 9 PM but came at 1 PM)

About Installation:
Was promised an installation in 48 hrs, it was done in 24 hours, wall mount was provided free of cost.
Read more
89 people found this helpful
Helpful
Comment Report abuse

Anand
4.0 out of 5 stars Nice
Reviewed in India on 18 December 2018
Size name: 43 InchesVerified Purchase
Bought for 38990 Rs in December 2018. Now it got reduced to 37k. Got wall mount stand alone with this product for 1500Rs for tilting. Try to get this stand for sure, otherwise your can't insert anything in USB port (pendrive) bcoz TV will be too closer to wall. This is a 40w speaker which I found cheap in price, in other Branded TV like Sony, LG doesn't have 20w speaker less than 1lakh /Rs. Bass effect is awesome. Picture clarity is also good
Read more

Cons-
1. Should have added 1 more USB port
2. Hotstar is not available in rizen .
3: TV installation was a little bit delayed otherwise no issues.
Read more

Amazon Customer
4.0 out of 5 stars Good TV. Few Compromises
Reviewed in India on 24 October 2018
Size name: 49 InchesVerified Purchase
No problems with display quality. The sound is loud, but there is a problem with sound when viewing DTH channels. The dialogue is muffled a little bit. No changes to the equaliser could give me satisfactory results.
Also the TV is THICK, my 9 year old TV was way slimmer, also the wall mount provided is not slim, so there is a lot of gap between TV and the wall(very disappointed with this one).
Also note the fact that the TV has a plasticky cheap feel to it.
Despite all these flaws, i dont regret my decision.

Edit: The apps on TV are quite good, most major apps are covered.
I had to buy a sound bar to address the muffled dialogue problem.
Read more
27 people found this helpful
Helpful
Comment Report abuse

santhosh kumar
5.0 out of 5 stars excellent tv 49n5300
Reviewed in India on 3 November 2018
Size name: 49 InchesVerified Purchase
got it for 46k. one yr extended warranty free.
sound quality is awesome.picture quality is good for hd channels. sd channels normal.
mobile casting without net will be done via phone setting.
select options such as wireless display in redmi phone. multi screen in oppo/real me. it is flawless. superb. happy with the product. but 2 way bluetooth connection is not comming to me. only from phone to tv is coming. from tv to phone is not comming
Read more
21 people found this helpful
Helpful
Comment Report abuse

SHIVAM DIXIT
5.0 out of 5 stars Must Buy
Reviewed in India on 10 November 2018
Size name: 43 InchesVerified Purchase
Picture Quality- awesome. BETTER than 4K of cheap Chinese tv. Go to showroom verify yourself. You will notice the difference.
Sound Quality - crisp clear sound with loudness. No need of soundbar.
Smart Features - you get everything... I mean Netflix and Amazon prime...

Worth every penny.
Good picture and sound quality what else you need out of a TV
Read more
22 people found this helpful
Helpful
Comment Report abuse
See all reviews from India
Unlimited FREE fast delivery, video streaming & more
Prime members enjoy unlimited free, fast delivery on eligible items, video streaming, ad-free music, exclusive access to deals & more.
> Get started
Back to top
Get to Know Us
Connect with Us
Make Money with Us
Let Us Help You
EnglishChoose a language for shopping.
© 1996-2020, Amazon.com, Inc. or its affiliates