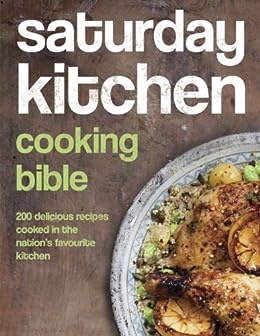 by Various (Author) Format: Kindle Edition
See all formats and editions
Sorry, there was a problem loading this page. Try again.

Each weekend, BBC's SATURDAY KITCHEN brings us the world's greatest culinary talents and shows us how to cook delicious food right in our own kitchen. THE SATURDAY KITCHEN COOKING BIBLE is a stunning new collection of recipes, with an introduction from James Martin, that will inspire and delight. All of the recipes have been cooked on the show and now you can make them at home. There are stress-free 30-minute meals such as Bill Granger's stir-fried chilli pork, ideas for satisfying weekend lunches, such as Angela Hartnett's chicken with chorizo, peppers and sage, James Martin's hearty beef and ale pie, and sensational dishes from Michelin-star greats like Jason Atherton and Michel Roux for when you really want to impress.

Be inspired to create some wonderful dishes of your own. Now you can with THE SATURDAY KITCHEN COOKING BIBLE.

Fans of James Martin's Saturday morning cookery show on BBC1 will relish this cheerful compendium of recipes by James and his celebrity chef guests. With appetising photographs and recipes that are tasty, but mostly simple to prepare, this is the book you need when you're stuck for a supper idea (how about spicy chicken with cucumber and cashew salad?), or want to treat your sweetheart to a special breakfast (salmon, eggs and Irish potato bread should do the trick).

This interesting compilation of 200 recipes works for different styles and ability levels. It's an all round cookery book with Asian recipes, seasonal suggestions and a section on wine for food. Stars from the show including James Martin, Richard Corrigan, Ken Hom and Nathan Outlaw have contributed dishes.

Do you spend a lazy weekend morning watching James Martin and Co cook up a storm on Saturday Kitchen? Well, now you can recreate their recipes in your own home, thanks to the Saturday Kitchen Cooking Bible, a new book with 200 delicious recipes from a selection of the nation's favourite cooks.

200 of the best recipes featured on the show have been collected in the Saturday Kitchen Cooking Bible for easy reference when recreating the dishes at home. It has everything from quick 30-minute meals such as Bill Granger's Stir-fried Chilli Pork, to sensational Michelin-starred showstoppers including Michel Roux's Spiced Roasted Pineapple with Coconut Rum Ice Cream for when you really want to impress

The Saturday Kitchen Cooking Bible includes all your favourite programme regulars such as Tom Kerridge, Michel Roux, Atul Kochhar and Richard Corrigan as well as other famous names such as Madhur Jaffrey and Ken Hom. Each presents recipes that can be easily replicated at home and do not require any special equipment

The BBC's Saturday Kitchen has a big following and this book of recipes from the show's favourite Michelin-starred chefs is bound to be a hit. All recipes in the book have been cooked on the show and sections include friends for dinner, small dishes and 30-minute meals. There's a handy section on the golden rules for choosing wines to partner certain dishes. A guide to what ingredients are in season at what times will be well-used, too

This is an excellent book, featuring dozens of quality chefs and features an excellent and hugely eclectic range of dishes that deserve your immediate attention.

This book is crammed full of easy-to-follow recipes from the guest list of chefs who appear with James Martin on BBC One's Saturday Kitchen. The emphasis is on family-friendly food, speedily made... Something for everyone, in fact! --This text refers to the hardcover edition.

200 mouth-watering recipes from Britain's food heroes. --This text refers to the hardcover edition.

4.5 out of 5 stars
4.5 out of 5
321 global ratings
How are ratings calculated?
To calculate the overall star rating and percentage breakdown by star, we don’t use a simple average. Instead, our system considers things like how recent a review is and if the reviewer bought the item on Amazon. It also analyses reviews to verify trustworthiness.
Top reviews

Donna
4.0 out of 5 stars A great resource for all cooking abilities.
Reviewed in the United Kingdom on 23 March 2021
Verified Purchase
My Uncle decided recently, he’d like to learn to cook. Good for him! Nothing strange about that I hear you say, what may surprise you is that he’s seventy one years old, and has always lived alone.
I bought the book for him as I know he’s a fan of the show, especially James Martin. As he puts it, it’s not a froo-froo cooking show, and many dishes appeal to his palate.
Read more
2 people found this helpful
Report abuse

Phil an Amazon Customer
3.0 out of 5 stars Ingredients are hard to get.
Reviewed in the United Kingdom on 14 July 2021
Verified Purchase
The book is well written with lots of interesting recipies, however some of the ingredients are hard to get and expensive. In all if you wish to learn new techniques it's great but it is out of reach for the average cook/chef.
Read more
Report abuse

Crystal
2.0 out of 5 stars Saturday kitchen
Reviewed in the United Kingdom on 3 May 2021
Verified Purchase
The most annoying thing about this book is the indexing. It’s such a bother scrolling to the end of the book constantly that I will probably not use it. Sorry.
Read more
Report abuse

ROSEMARY ROGERS
5.0 out of 5 stars Fab Recipes
Reviewed in the United Kingdom on 7 June 2021
Verified Purchase
I am an avid watcher of the TV shows and am always ready to try out the recipes which are varied and delicious
Read more
Report abuse

Dorothy
5.0 out of 5 stars Great recipes!
Reviewed in the United Kingdom on 22 July 2021
Verified Purchase
There is a great variety of recipes.I have tried a few of them and they all came out as expected. Would recommend.
Read more
Report abuse
See all reviews
Back to top
Get to Know Us
Connect with Us
Make Money with Us
Let Us Help You
EnglishChoose a language for shopping.
© 1996-2022, Amazon.com, Inc. or its affiliates