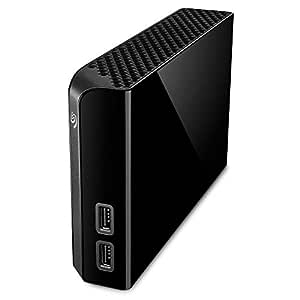 Your favorite files, photos and videos can be easily backed up from your PC using downloadable Seagate backup software.

4.3 out of 5 stars
4.3 out of 5
2,847 global ratings
How are ratings calculated?
To calculate the overall star rating and percentage breakdown by star, we don’t use a simple average. Instead, our system considers things like how recent a review is and if the reviewer bought the item on Amazon. It also analyses reviews to verify trustworthiness.

Candies&Pickles
4.0 out of 5 stars It's a 3.5TB Hard Drive, not 4TB. Accept it.
Reviewed in India on 28 May 2020
Capacity: 4 TBVerified Purchase
I don't understand why it is totally acceptable by everyone that when a hard drive says it is 4TB capacity but it is actually 3.63TB. Why do we have to accept that we just lost 275GB for false marketing? This is not a 4TB HDD and must be advertised as 3.5 TB. This should be some consumer right to demand and expect what was advertised but since this is the norm by all hard drive manufacturers, consumers have accepted that they will always get less than what they were told. But why should we accept it like that? Manufacturers can quote hundreds of practical reasons why there is a loss of capacity yada yada but why can't they just advertise it for the actual capacity it has or Add additional capacity so that the consumer finally receives the capacity advertised?
Read more
88 people found this helpful
Helpful
Report abuse

rajat khanna
1.0 out of 5 stars Dont buy this , it has an archive hdd with smr tech and extremely slow write
Reviewed in India on 14 November 2019
Capacity: 10 TBVerified Purchase
Beware don't buy this hard drive, this is utter garbage hard drive, from the first the day it came I plugged it into my laptop it was making weird clicking and clattering noise even when it was not reading or writing and then comes surprise when i started copying data on this drive which was a nightmare i was merely getting 50mbps over usb3.0 and when i tried copying my 2tb data on it from my passport drive it was copying at 20mbps showing 3 days to complete and all the time it was clicking and clattering as if it was going to fail any minute, this all this is because SEAGATE HAS USED AN ARCHIVE HDD IN THIS BACKUP PLUS WHICH USES SMR TECHNOLOGY PLEASE STAY AWAY FROM THIS DRIVE
Read more
126 people found this helpful
Helpful
Report abuse

I think of it as a great choice for enhancing storage and backing up important data.
I found the product to be sleek, hardly taking up any table space.

I could easily connect another Seagate 4 TB Backup plus, USB 3.0, external, 'powered' hard drive along with a Seagate FreeAgent GoFlex 500 GB, USB 3.0 hard drive, which worked flawlessly together.

The basic concept is, the two USB 3.0 ports act as additional ports for USB devices expansion.
So even if you connect a USB mouse, keyboard, speakers, pen drives or anything which requires a USB port, work here also. Cellphone, power bank charging as well

The data transfer speeds entirely depend upon the type of USB port (2.0/3.0) you plug it into.
Best part about USB 2.0 & 3.0 is that they are both ways compatible.

I've always believed USB, as one of the best inventions and best among interfaces for IT related products.

Yadnyesh Prabhu
5.0 out of 5 stars The best 10 TB external drive in terms of performance & money as of June 2019.
Reviewed in India on 12 June 2019
Capacity: 10 TBVerified Purchase
Current prices is not worth per TB. I had purchased this during sale.If you have more than 8TB or close 8TB worth of data, It's always better to buy 10 TB so that you don't have to split your data in multiple drives. This is a standard product . I had good experience with Seagate HDD in the past. The read and write speeds is more than 100MBps when both the destination and source are using USB 3.0 ofcourse.
Read more
17 people found this helpful
Helpful
Report abuse

SuKaVi
5.0 out of 5 stars Works as expected
Reviewed in India on 16 June 2019
Capacity: 4 TBVerified Purchase
Fastest delivery. Product received in very good condition and worked as expected. Product may not be portable as it is bulk. Almost 4x bigger than the regular HDD. The USB hub also works fine but speed is at par to 2.0 only.
Read more
14 people found this helpful
Helpful
Report abuse

siva
5.0 out of 5 stars Excellent i think this is my Festival gift .......
Reviewed in India on 10 October 2019
Capacity: 4 TBVerified Purchase
Ordered this on Festival 2019 sale and got this for only7300.
Now coming onto the HDD it's as good as it can be , the read write speeds are amazing and touches 100 MBps when copying one big file but slows down when copying multiple smaller file but this is not a fault of HDD so it's all good. LED Seagate LOGO notification light is very impressive me .Excellent i think this is my Festival gift .......
Read more

Mohammed S.
3.0 out of 5 stars Heats up with extremely limited chance to cool it.
Reviewed in India on 19 December 2019
Capacity: 8 TBVerified Purchase
Performance it very nice. Read and write speeds upto 160-170mbs. It heats up to 44c even at idle with a fan blowing under it, only one side has venting holes i am not sure how to regulate any airflow in there as the operating temps of 48-49c will kill the drive within 3-4 years. Which you cannot afford for such a large capacity drive. Deducting 2 stars for this design issue.
Read more
7 people found this helpful
Helpful
Report abuse

daimary
3.0 out of 5 stars Decent ext. HDD
Reviewed in India on 12 May 2019
Capacity: 6 TBVerified Purchase
Decent ext. HDD. Bought it for 10,999/- only.
Speed is not great but gives you good space to store your data. Total space you get is 5.45TB.
Packaging wasn't great at all. Will know how long drive will last after sometime.
Read more

WJames
1.0 out of 5 stars I would happily destroy it upon receipt of a new replacement
Reviewed in the United States on 26 February 2018
Capacity: 6 TBVerified Purchase
I accepted delivery of a Seagate Backup Plus Hub 6TB External Desktop Hard Drive Storage STEL6000100 from Amazon.com on December 20, 2017. For a period of about 30 days it performed as expected. Quiet and dependable. However, beyond that point, my HP Pavilion Desktop 570-p094 running on Windows 10, failed intermittently to recognize the drive. Upon restarting my computer, the problem seemed to self rectify. This condition persisted for several weeks. Lamentably, shortly thereafter, the drive began making grinding and chattering noises. After which point, my computer no longer recognized the drive. I have attempted to utilize "SeaTools for Windows" to no avail. It also failed to detect the drive. Additionally, I unsuccessfully attempted to initialize the drive with any of the available USB ports on my computer. The drive is neither detected within the Device Manager nor Disk Management.
I have had several rounds of emails with Seagate Support which ultimately concluded with the recommendation of returning the drive for replacement. Seagate stipulated though, as follows: "Please be advised, Seagate may replace your product with a product that was previously used, repaired, and tested to meet Seagate specifications." Not much comfort there, considering that the new unit that I purchased presumably also met Seagate specifications. I do not find it acceptable that I should have to front the cost of return shipping. Nor do I feel any confidence in the security of my personal data contained on the drive should I return it to Seagate. The only resolution that I would find acceptable would be to have Seagate send a new drive to replace the doorstop that I now own. I would happily destroy it upon receipt of a new replacement. But then there is the reality of the personal data that is now lost.

I do not write reviews. However, to this I am making an exception due to the sudden, complete, and catastrophic failure of this drive. As a consequence, I have lost irreplaceable photos and documents. Common wisdom advises the back up of data. This was precisely my reason for the purchase of this drive. I backed up the internal hard drive of a computer that I recently whiped and discarded. Back-up the back-up the back-up? Where does it end?

Do a bit of research before buying this product. You will find independent reviews that determine that some Seagate products are unreliable, defective, and (fail) prematurely at spectacularly, and in many respects, unprecedentedly high rates. That is most certainly true of this product. At the time that I am writing this review, nearly 150 of the 1,151 Amazon customer reviews are solidly negative. This drive should stop shipping until the manufacturing defects are corrected.

Every component of my budget system operates flawlessly with the exception of this pathetic device.

Mark Twain
4.0 out of 5 stars Its a 6GB Drive on the RHS of the road...
Reviewed in the United Kingdom on 3 May 2018
Capacity: 6 TBVerified Purchase
Seems like a good value drive, Has USB 3 support...
Dissapointed that it comes with a US style PSU "plug" without any adapters for other countries... it is common place now a days to supply a power unit with a universal mounting system and several adapters.. it would not have cost much more, and for a product this expensive is a drop in the ocean
Read more
6 people found this helpful
Report abuse

Safdar K.
5.0 out of 5 stars IGNORE NEGATIVE REVIEWS, buy it if you need it!
Reviewed in the United Kingdom on 9 January 2021
Capacity: 14 TBVerified Purchase
PERFECT item, it is as described, comes with 3 years warranty. It also comes with 4 month Adobe subscription (which I don’t care).

Ignore negative reviews about this item, they are just kids that don’t know how to use a hard drive, if you use it as instructed you will never have any problems.
Read more

5.0 out of 5 stars IGNORE NEGATIVE REVIEWS, buy it if you need it!
Reviewed in the United Kingdom on 9 January 2021
PERFECT item, it is as described, comes with 3 years warranty. It also comes with 4 month Adobe subscription (which I don’t care).

Ignore negative reviews about this item, they are just kids that don’t know how to use a hard drive, if you use it as instructed you will never have any problems.

ScottishYorkshireMan
5.0 out of 5 stars It's quick and it's a large drive.
Reviewed in the United Kingdom on 15 December 2020
Capacity: 12 TBVerified Purchase
It's a fast drive, large files >100MB/s. Software covers what you need in terms of backup and/or mirroring. One thing, it sounds occasionally like R2D2, makes some strange noises. Would I buy again, yes but not for a while. 12TB is a large drive.
Read more
Report abuse