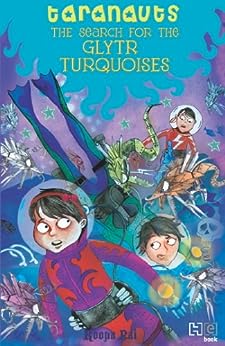 The Search for the Glytr Turquoises (Taranauts Book 7) Kindle Edition

Roopa Pai has won a Children's Book Trust award for science writing. Among her published works are a four-book science series, Sister Sister (PrathamBooks), and two-girl power books, Kaliyuga Sita and Mechanic Mumtaz (UNICEF). When she is not dreaming up plots for her stories, she goes on long bicycle rides, and takes children on history and nature walks in Bangalore. --This text refers to the paperback edition.

4.0 out of 5 stars
4 out of 5
9 global ratings
How are ratings calculated?
To calculate the overall star rating and percentage breakdown by star, we don’t use a simple average. Instead, our system considers things like how recent a review is and if the reviewer bought the item on Amazon. It also analyses reviews to verify trustworthiness.
Top reviews

Gunjan Sumit
1.0 out of 5 stars Why not in kindle edition
Reviewed in India on 2 May 2017
Rest of series are in kindle edition why is this not avaliable
Read more
2 people found this helpful
Helpful
Report abuse
See all reviews
Back to top
Get to Know Us
Connect with Us
Make Money with Us
Let Us Help You
EnglishChoose a language for shopping.
© 1996-2021, Amazon.com, Inc. or its affiliates