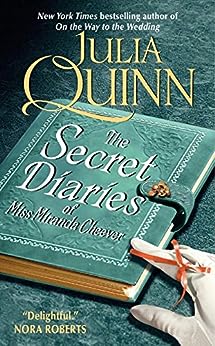 Welcome to The Bevelstokes, an irresistibly romantic collection by the bestselling author of Bridgerton, now a series created for Netflix by Shondaland --This text refers to the paperback edition.

The first book in the Bevelstoke series: witty, irresistibly romantic and by the bestselling author of the global phenomenon Bridgerton

At the age of ten, Miss Miranda Cheever showed no signs of ever becoming a Great Beauty. Her hair was lamentably brown, her eyes the same muddy colour, and her legs, which were uncommonly long, lacked anything which might remotely be called grace. So, even at ten, Miranda learned to accept the expectations society held for her - until the afternoon when the handsome and dashing Viscount Turner solemnly kissed her hand and promised her that one day she would grow into herself, that one day she would be as beautiful as she already was smart. Even at ten, Miranda knew she would love him forever.

"'reminiscent of Bridget Jones' Time Magazine" --This text refers to the paperback edition.

With tens of millions of copies in print, #1 New York Times bestselling author Julia Quinn has been called “Smart, funny,” by TIME Magazine. Her novels have been translated into 35 languages and are beloved the world over. A graduate of Harvard and Radcliffe Colleges, she lives with her family in the Pacific Northwest.

Look for Bridgerton, based on her popular series of novels about the Bridgerton family, on Netflix.

4.4 out of 5 stars
4.4 out of 5
1,036 global ratings
How are ratings calculated?
To calculate the overall star rating and percentage breakdown by star, we don’t use a simple average. Instead, our system considers things like how recent a review is and if the reviewer bought the item on Amazon. It also analyses reviews to verify trustworthiness.
Top reviews

Shruthi Vijayan
5.0 out of 5 stars A wonderful story
Reviewed in India on 9 April 2014
Verified Purchase
I read this once in the library and I simply had to have it for my own. I love this book very much. Kudos to Ms. Quinn.
Read more
Helpful
Report abuse

Amazon Customer
2.0 out of 5 stars Ok
Reviewed in India on 11 August 2016
Verified Purchase
Expected more from the writer of Bridgerton series. Not bad but not one of Julia's best works
Read more
Helpful
Report abuse

Amazon Customer
1.0 out of 5 stars Wrong delivery
Reviewed in India on 29 April 2019
Verified Purchase
I have received a french dictionary instead of my novels!
Read more
One person found this helpful
Helpful
Report abuse

Amazon Customer
5.0 out of 5 stars excellent , engaging
Reviewed in India on 10 May 2017
This book is not for the girls who believe that they are an INCOMPARABLES !
It is for the wall flowers .
It tells you something you already know
What you see is not what you get
beauty lies in the eyes of the beholder.
Miranda Cheever doesn't possess the kind of beauty that can make a guy lose his head and heart but her intelligence, clarity , confidence and ability to love make her perfect for the ONE looking for anything but love .
The writing style is beautiful and engaging and you can't but help that Miranda gets what she wants
Miss Cheever rooting for you

Kesse
3.0 out of 5 stars A bit of a struggle
Reviewed in the United Kingdom on 1 May 2020
Verified Purchase
I really enjoyed most books by this author, but not so much this one. I hope it won't be a great SPOILER to say that it tell us a story of a little girl who fall in love and 10 years later got her prince charming. He think he doesn't love her but "surprisingly" at the end he realised he loved her all along....
There is no signature humour in this book, nor there is and background mistery, that keeps us on the edge of our seats.

RosieJD
4.0 out of 5 stars A darker romance
Reviewed in the United Kingdom on 19 January 2021
Verified Purchase
This is probably the darkest JQ book, with both the hero and heroine behaving badly and it certainly deals with the pain of unrequited love and the bitterness of betrayal. I enjoyed this book as it explores darker emotions within the context... wish there had been an epilogue though which may have helped the feel good factor I normally associate with the end of a JQ book
Read more
2 people found this helpful
Report abuse

Mrs S J
5.0 out of 5 stars Julia Quinn at her best.
Reviewed in the United Kingdom on 25 March 2021
Verified Purchase
I have not read a book that has captivated me forsome time. This book however has done just that. I followed the relationship of Miranda and Turner through all its up and downs. How one person's inability to tell another how they feel caused such heartbreak and pain. Julia Quinn has excelled herself. I could not put this book down. If you are a Julia Quinn fan then you NEED to read this book. It's absolutely great.
Read more
Report abuse

C. Daly
5.0 out of 5 stars An enchanting read.
Reviewed in the United Kingdom on 16 June 2020
Verified Purchase
Outside of the Bridgerton series, this is hands down my favourite Julia Quinn book. Not only does Quinn breathe her usual wit into the characters and their storylines , but I found myself truly caring what happened to both Miranda and Turner. I struggled to put this book down and I lost a night's sleep as a result.

This is my second read through this enchanting story and I know I will revisit it again in the future.

Carol
5.0 out of 5 stars Excellent
Reviewed in the United Kingdom on 26 December 2020
Verified Purchase
A masterclass in mixing humour and romance with heartbreak and happiness. A man & a woman whose characters are each side of the same coin. Open and trusting against closed and broken. What a great rollercoaster ride through their growing relationship and ultimate happy life together.
An enjoyable, funny, entertaining story - go read it now!
Read more
Report abuse
See all reviews
Back to top
Get to Know Us
Connect with Us
Make Money with Us
Let Us Help You
EnglishChoose a language for shopping.
© 1996-2021, Amazon.com, Inc. or its affiliates