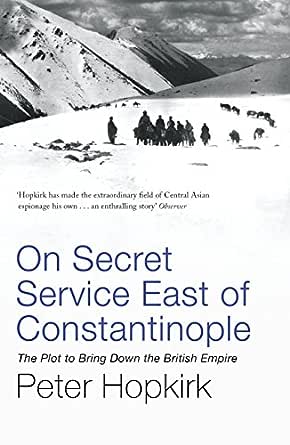 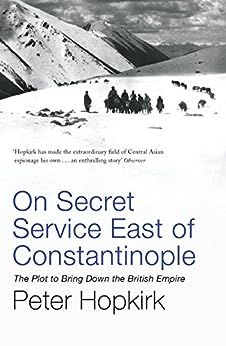 On Secret Service East of Constantinople: The Plot to Bring Down the British Empire Kindle Edition

Under the banner of a Holy War, the Germans and Turks set out in 1914 to foment violent revolutionary uprisings against the British in India and the Russians in Central Asia. This is the story of the Turco-German jihad told through the adventures of the secret agents and others who took part in it. --This text refers to an alternate kindle_edition edition.

'Recreates with much verve and brilliance, the clandestine attempts by Britain's imperial rivals to subvert the British Empire in India' (Guardian)

'Tells with great fluency, authority and narrative skill . . . a story which no single book has told before' (Sunday Telegraph) --This text refers to the paperback edition.

Peter Hopkirk travelled widely in the regions where his six books are set: Central Asia, the Caucasus, China, Russia, India and Pakistan, Iran, and Eastern Turkey. He worked as an ITN reporter, the New York correspondent of the old Daily Express, and - for twenty years - on The Times. No stranger to misadventure, he was twice held in secret police cells and has was also hijacked by Arab terrorists. His works have been translated into many languages. All six of his books are available from John Murray: THE GREAT GAME, ON SECRET SERVICE EAST OF CONSTANTINOPLE, SETTING THE EAST ABLAZE, TRESPASSERS ON THE ROOF OF THE WORLD, FOREIGN DEVILS ON THE SILK ROAD and QUEST FOR KIM. --This text refers to the paperback edition.
Read more

4.7 out of 5 stars
4.7 out of 5
92 global ratings
How are ratings calculated?
To calculate the overall star rating and percentage breakdown by star, we don’t use a simple average. Instead, our system considers things like how recent a review is and if the reviewer bought the item on Amazon. It also analyses reviews to verify trustworthiness.

Srinath Ananthanarayanan
4.0 out of 5 stars Priceless History at an affordable Price
Reviewed in India on 11 February 2020
Verified Purchase
It's worth the money.A truly great book to read and experience history.Although its imported from US (it has a $ price) Its cheaper than its dollar counterpart.Worth the price and a good read
Read more
Helpful
Report abuse

Daniel Ostrowski
3.0 out of 5 stars Decent non-academic account but now partly outdated, and with strange focuses
Reviewed in the United Kingdom on 4 June 2019
Verified Purchase
One very odd thing about this book is the way it jumps about. The book begins by exploring the Turco-German friendship, then the Hindu-German conspiracy, then the Afghanistan mission of Niedermayer and the activities of agents in Persia, then the battles for Baku, and finally affairs in Transcaspia. None of these threads is followed all the way through- Hopkirk explores each area when it is most relevant, but each thing is dropped. You learn the important bits of each region's experience, but never a whole picture of the war in any given place. It works as a readable introduction to these separate aspects of the war, but no more than an introduction to each; you can't be an expert on the Caucasus on the war by reading a book where the Caucasus is barely mentioned until 1918!

In some regards the book is outdated, too. Hopkirk's confident condemnation of Indian nationalists, as if no readers would view the British Empire as anything but an undisputed good, is rather jarring. So too is his depiction of Enver Pasha as a nationalist fanatic, with most modern works being rather more nuanced. Hopkirk devotes a whole chapter to the Zimmermann telegram, based on an alleged link to a German agent in Persia- but Sean McMeekin in his "The Berlin -Baghdad Express" argues that this is entirely founded on a misconception. The book should be praised for its examination of Captain Teague-Jones and the Baku commissars (Hopkirk tells us that, in the former case, he was the first to uncover much of the truth, which I have no reason to doubt) but I believe there may also be some more modern work on this too.

If you don't care too much about being up to date with the latest WW1 scholarship, then the book is fine as a popular history, telling engaging stories about several fronts of the war in the east where secret agents and Lawrence-like figures take centre stage. But I think a modern expert in these areas would find a lot to pick holes in here, and so I think those with a serious interest in the war might want to look elsewhere, or at least treat this only as an introduction to these facets of the war.
Read more
5 people found this helpful
Report abuse

M. Baerends
5.0 out of 5 stars Great Stuff
Reviewed in the United Kingdom on 2 January 2014
Verified Purchase
The first book by Peter Hopkirk I read was his famous 'the Great Game' on English-Russian rivalry in Central Asia from the early 1800s up to British-Russian reconciliation just before World War One. This one takes off where 'the Great Game left' and deals with what happened in Turkey, the Caucasus, Persia, Afghanistan, India and Central Asia until the end of World War One.

Perhaps the main storyline is about the German attempts to incite muslims living under British and Russian rule against their colonial rulers. This involved infiltrations in Persia (trying to get the Shah to invade British India or joint the Turks in their fight against Russia, but at the very least to tie down more British troops in the Gulf region), and a diplomatic mission via Persia to Afghanistan to convince the Afhgan king to invade British India. As we know now, all of this was way too ambitious and almost nothing was achieved - despite admirable efforts by the small German delegation.

Another even more interesting storyline is on the events in the Caucasus - notably Baku - in the confused time from the November 1917 revolution to the end of WWI. I had never realized that the Turks, having now shed the burden of fighting the Russians, embarked on a final desperate offensive and actually managed to capture Baku just before their own capitulation (reportedly one of the reasons for Allenby's success in Jeruzalem and Damascus was the diversion of Turkey's best troops to the Caucasus). There is also an interesting sideline into Central Asia, where 'Transcaspia' (say Turkmenistan) rose against the Bolsheviks and fought them with limited British assistance.

RE-READ AUGUST 2019: re-read this book after some 5 years, and enjoyed it just as much. What a story, what phenomenal writing, what a breathtakingly wide scope (covering the storming of Erzerum to shady arms deals in California, from the Zimmermann telegram (which would likely never have been revealed had the British not captured key German codes in the Persian outback) to the Battle of Baku. Just one critical note: Hopkirk might have talked a bit more about the main reason of Persia's importance to the British, namely the vast supplied of oil near the head of the Persian Gulf - this was in fact a good deal more important than Persia's role as a rather forward 'bulwark' of British India....
Read more
9 people found this helpful
Report abuse

munster8
5.0 out of 5 stars Fascinating account
Reviewed in the United Kingdom on 2 June 2018
Verified Purchase
An absolutely superb book, packed full of character. It brings to life this little known aspect of WW1 and just after and proves once again that true life can be just as gripping, as well as stranger, than fiction. Hopkirk’s style is crisp and moves the story along at a good pace. Can not recommend this book highly enough.
Read more
One person found this helpful
Report abuse