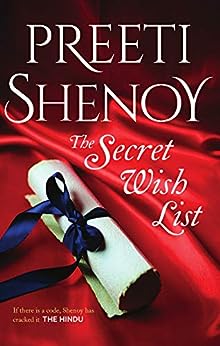 A very good attempt.. I think India is answering in a nice way by producing talented new authors. Some of them I have mentioned below.I am a vivid reader and read almost all the books that come my way. This book is one of the best. 1. I too had a love story - Ravinder Singh 2. That's the way we met- Sudeep Nagarkar 3. Journey Of Two Hearts- Anuj Tiwari 4. The Secret Wish List- Preeti 5. Life is what you make it- Preeti --Kinjal Batra on 20 Jan 2013

An engrossing tale of an Indian Women who as a young girl has ambitions and her own identity. Yet, she succumbs to parental pressures and ends up getting married to someone she doesn't look up. She has an independent house, a smart kid, high earning husband and supposedly everything that typical conservative Indian Parents would call for in a perfect Married life. But there's definitely more to life. An identity for oneself, a relationship with your better half that gives you space to breathe and be yourself, a friend in a husband. These are the traits Diksha never finds in her husband. A sequence of events that lead her to realizing what she wants our of life and that gives birth to her "Secret Wishlist". The narration is beautiful and only an Author of the Caliber of Preeti Shenoy can put forth her ideas so flawlessly that you build an instant connect. Her style of writing hits you gently yet deep within, that you would want to get up and take charge of your life, married or unmarried, young or old, the novel will push you to pause and think if you are what you wanted in life. If not, it's time to get up and get going. Preeti Shenoy has a clear and lucid style of writing that keeps you gripped to the novel. I finished it in 3 hours straight and I am all charged up to take ownership of my life. --Megha Singh on 25 Dec 2012

One of the best books you would ever come across. The author is a born storyteller whose books top the bestsellers and her writings continue to inspire many.About The Secret Wish List, Captivating story line, realistic characters, a kind of narration that is bound to transport you to exotic locations, makes you feel heart warming true and deep friendship and care, an insight into the existence of few robotic humans.This is a story of how the protagonist Diksha gets to live a life of her choice after succumbing to parental/ society's pressure for over 18 long years. The story focusses on living rather than merely existing. The climax might not be so conservative but it sure is a feel good, happy ending.Do fill in the blanks and give life to your wishes --Harini on 14 Jun 2013 --This text refers to the paperback edition.

4.3 out of 5 stars
4.3 out of 5
802 global ratings
How are ratings calculated?
To calculate the overall star rating and percentage breakdown by star, we don’t use a simple average. Instead, our system considers things like how recent a review is and if the reviewer bought the item on Amazon. It also analyses reviews to verify trustworthiness.

Subash
3.0 out of 5 stars Read the full review. It's nice book
Reviewed in India on 25 November 2017
Verified Purchase
Preethi shenoy had very good story telling skills. Even though it's a predictable story, she has written it well. I read many negative reviews from guys abt this book. If u treat women cheaply without attention, this is what u get. If u r confident enough that u treat ur women in good way, u wouldn't say this book is not good. Women should have courage like how it is mentioned in this book and speak up. It's never too late. I have rated 3 stars bcos there are some parts wer it gets really boring and I skipped. Salsa class and the trip to Maldives were dragged and unnecessary during that situation in the story. But overall a very nice book. Should gift this to women who are struggling in such married lives.
Read more
8 people found this helpful
Helpful
Report abuse

Shan
4.0 out of 5 stars An interesting story of a woman
Reviewed in India on 28 June 2018
Verified Purchase
A very interesting story that would keep you captivated. You would relate to Diksha as a person, woman, wife and mother and what all she has suffered during her life.
The author has subtly touched many soft issues that are still prevalent in the country. While there is a lot of despair in the story, there is also a lot of hope.
In the end you need to stand up and own your secret wish list too.
Read more

4.0 out of 5 stars An interesting story of a woman
By Shan on 28 June 2018
A very interesting story that would keep you captivated. You would relate to Diksha as a person, woman, wife and mother and what all she has suffered during her life.
The author has subtly touched many soft issues that are still prevalent in the country. While there is a lot of despair in the story, there is also a lot of hope.
In the end you need to stand up and own your secret wish list too.

Amazon Customer
1.0 out of 5 stars Not recommended this one. I like to read all books by Preeti but don't like this one
Reviewed in India on 24 November 2019
Verified Purchase
Not at all agree with the point of view. The character / extramarital affair by the heroine of this novel was something non acceptable. It's something out of the limits. She could have done many more things to get her life on track. It would be a better plot then.
Read more
One person found this helpful
Helpful
Report abuse

luv2read
4.0 out of 5 stars My favourite book
Reviewed in India on 4 August 2020
Verified Purchase
This is a vey nice script... Well-written... How nicely the characters protreyed..... Wow... The best character in the whole book is the kid.. Even a small kid....no matter how old he is. Can gather the knowledge from the environment surrounding him and understands the situation and stands for the wise decission... Superb.
Read more
Helpful
Report abuse

Akshay Yeram
4.0 out of 5 stars Elaboration of life
Reviewed in India on 25 June 2021
Verified Purchase
This secret wish list tells you how you should live your life against the flow. Every single life should live in your own way and it should.
This a simplest story of married woman is narrated in very great storytelling manner.
This novel lauding voices that everyone should execute their wish list in out of the box way irrespective of any circumstances.
Read more
Helpful
Report abuse

Priyanka
5.0 out of 5 stars Wonderful
Reviewed in India on 2 July 2021
Verified Purchase
It puts all the typical scenarios that "young" Indian women face in such a surreal n agile manner that one could not just take one's eyes off the novel until was over.
Loved it. It is especially a good read for those in their 20s or early 30s. Teaches a lot. Go for it 👍🏼
Read more
Helpful
Report abuse

Naz
3.0 out of 5 stars Three Stars
Reviewed in the United Kingdom on 17 July 2015
Verified Purchase
It was ok
Read more
One person found this helpful
Report abuse

B A
5.0 out of 5 stars Five Stars
Reviewed in the United Kingdom on 10 February 2015
Verified Purchase
Good piece of writing.. Helps one to believe in dreams and accomplishing them...
Read more
Report abuse

Linda Quintana Mansouri
5.0 out of 5 stars Holds your Attention
Reviewed in the United States on 3 April 2018
Verified Purchase
An excellent and quick read - one day. I really love books on the cultural aspects in novels about India. This is a new author to me, recommended by Renita d'Silva and I will buy more of her books. The book was fast moving and realistic to the situation of the women in conservative India. One one scene I didn't feel was realistic to a conservative woman, even though she was breaking out of that, but don't want to spoil the plot
Read more
Report abuse

ambika
3.0 out of 5 stars Fulfilling dreams..
Reviewed in the United States on 27 December 2014
Verified Purchase
I liked the novel for its simplicity of language. It narrates well and keeps u engrossed but i feel extra marital affair is exaggerated.. but in the end happy ending and a female protagonist with complicated life, able to solve her life and free herself from stifling marriage.. keeps u engaged !!
Read more
Report abuse

nandini barve
4.0 out of 5 stars must read!
Reviewed in the United States on 14 June 2014
Verified Purchase
She is understands human emotions very well. Some where all of us try to associate with her characters in all her books. I have read other books of Preeti Shenoy , the way she portrays her characters is beautiful.
Read more
Report abuse
See all reviews

Preeti Shenoy, among the top five highest selling authors in India, is also on the Forbes longlist of the most influential celebrities in India.. Her work has been translated to many languages.She is India's most loved author, on life and relationships.

India Today has named her as being unique for being the only woman in the best-selling league. She has been awarded the ‘Indian of the Year’ award for 2017 by Brands Academy for her contribution to Literature. She has also received the Academia award for Business Excellence by the New Delhi Institute of Management. She has given talks in many premier educational institutions such as IITs and IIMs and corporate organisations like KPMG, Infosys and Accenture. She is also an artist specialising in portraiture and illustrated journalling.

Her short stories and poetry have been published in various magazines such as Conde Nast and Verve. She has been featured on BBC World, Cosmopolitan,The Hindu, Verve, Times of India and many more.

She has a very popular blog and also wrote a weekly column in The Financial Chronicle for many years. She has a massive online following. Her other interests are travel, photography and yoga. Her books include A Hundred Little Flames, It’s All In The Planets, Why We Love The Way We Do, The Secret Wish List, The One You Cannot Have and many others.