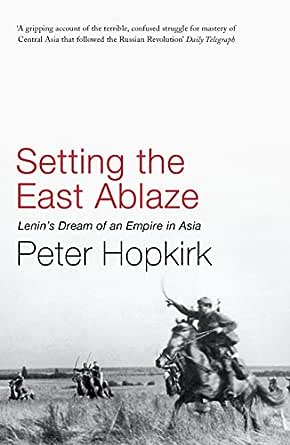 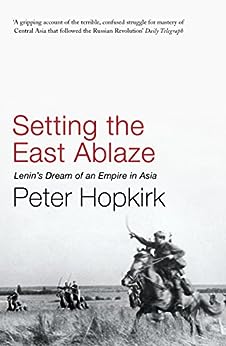 Setting the East Ablaze: Lenin's Dream of an Empire in Asia (Not A Series) Kindle Edition

Amid the sand and rock of Central Asia, Russia and England spent much of the 19th century playing what historians have come to call the Great Game: the struggle for control over transcontinental routes from Europe to the Far East. When the Bolsheviks came to power in 1917, Lenin continued to press Russian--now Soviet--claims to faraway, fabled places such as Samarkand and Hotan. The intrigues of his agents and their British counterparts, swashbucklers all, could come from a modern spy novel, and they make for fascinating reading in Peter Hopkirk's vivid account. --This text refers to an alternate kindle_edition edition.

This story of how Lenin and his comrades tried to preach the Marxist gospel to the East gathers reports from secret archives, intelligence reports, and memoirs to piece together the entire story for the first time. Enjoy a fine history which reads like a novel in its drama and political insights. -- Midwest Book Review --This text refers to an alternate kindle_edition edition.

'A gripping account of the terrible, confused struggle for mastery of Central Asia that followed the Russian Revolution' Evening Standard


PETER HOPKIRK is the author of Like Hidden Fire: The Plot to Bring Down the British Empire, Trespassers on the Roof of the World: The Race for Lhasa, and two other books. A staff writer for the Times of London for nineteen years, five as its chief reporter, he is a Middle and Far East specialist.
--This text refers to an alternate kindle_edition edition.
Read more

4.6 out of 5 stars
4.6 out of 5
79 global ratings
How are ratings calculated?
To calculate the overall star rating and percentage breakdown by star, we don’t use a simple average. Instead, our system considers things like how recent a review is and if the reviewer bought the item on Amazon. It also analyses reviews to verify trustworthiness.

b frank
5.0 out of 5 stars Fascinating times
Reviewed in the United Kingdom on 21 April 2017
Verified Purchase
At times it was necessary to remind ones self this was reality and not a spy novel.
A well written and fascinating account of intrigue, skullduggery and barbarism in a part of the world still in the grip of despots and tyrants.
This and the Great Game by the same author I thoroughly recommend to those interested in the detail of this place and time.

Maecenas13
4.0 out of 5 stars Enjoyably written account of the chaos of Central Asia 1917-1940s
Reviewed in the United Kingdom on 19 February 2014
Verified Purchase
Although not quite reaching the heights of The Great Game by the same author, this is a highly readable and entertaining account of the machinations of Russia and Britain in Central Asia during the inter-war years. There are some very well drawn portraits of the colourful characters who made the most of the chaos of the Russian civil war after the Bolshevik revolution: cunning Borodin, bloodthirsty Baron Ungern Sternberg, daring Enver Pasha, plucky Colonel Bailey, 'Big Horse' Ma, the Chinese Muslim warlord. Combined with a brisk narrative that crackles along, it makes for a great read.

For anyone interested in Xinjiang (Sinkiang, Chinese/Eastern Turkestan) this is also an interesting book and underlines why China is so sensitive about the region today.

Cybil
5.0 out of 5 stars For all History Buffs
Reviewed in the United Kingdom on 17 September 2015
Verified Purchase
I have never knew anything about this area of the world before reading Peter books its almost unknown and unexplored even today.
The Great Game sets the scene our Victorian Forefathers were something else they were awsume I would reccomend all Peters books on this subject he has made it his own Fantastic Brilliant

Scouseman47
5.0 out of 5 stars Most informative
Reviewed in the United Kingdom on 14 August 2015
Verified Purchase
Excellent book giving an insight to the hidden politics of history in an area of the world traditional history lessons fail to cover - the rest of Hopkirk's books are excellent also.
Read more
Report abuse