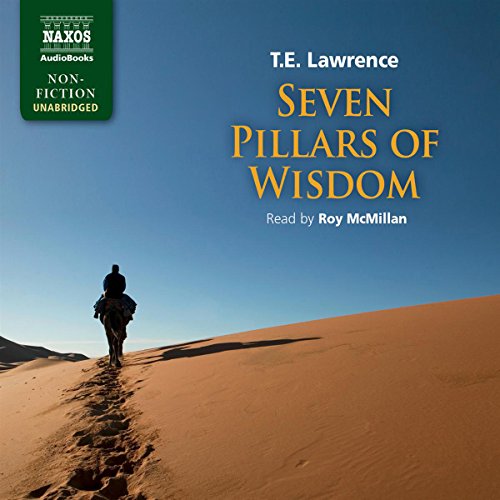 Although T. E. Lawrence, commonly known as "Lawrence of Arabia", died in 1935, the story of his life has captured the imagination of succeeding generations. Seven Pillars of Wisdom is a monumental work in which he chronicles his role in leading the Arab Revolt against the Turks during the First World War. A reluctant leader, and wracked by guilt at the duplicity of the British, Lawrence nevertheless threw himself into his role, suffering the blistering desert conditions and masterminding military campaigns which culminated in the triumphant march of the Arabs into Damascus.

Read more
Public Domain (P)2012 Naxos AudioBooks
Previous page
Next page
Learn more about membership
By completing your purchase you agree to Audible’s Conditions Of Use Amazon's Privacy Notice.
Sold and delivered by Audible, an Amazon company
Share
Back to top
Get to Know Us
Connect with Us
Make Money with Us
Let Us Help You
EnglishChoose a language for shopping.
© 1996-2021, Amazon.com, Inc. or its affiliates