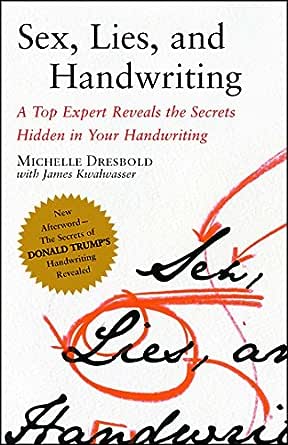 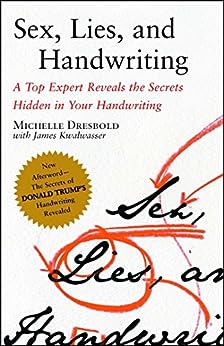 Sex, Lies, and Handwriting: A Top Expert Reveals the Secrets Hidden in Your Handwriting Kindle Edition

“Informative and entertaining.... The prose is bright, conversational, witty and not bogged down by technical jargon. This book will have you excitedly minding—and analyzing—your ‘Ps’ and ‘Qs’ and all the other letters, too.”
—Pittsburgh Post-Gazette

“Dig out all those old birthday and holiday cards and love notes you’ve been hoarding over the years. You may just learn something new—and shocking—about the person who penned them.”
—Charleston Post and Courier --This text refers to an alternate kindle_edition edition.

Michelle Dresbold, a graduate of the United States Secret Service's Advanced Document Examination training program, is considered one of the top experts in the nation on handwriting identification, personality profiling, and threat analysis. She consults to private attorneys, police departments, and prosecutors throughout the United States. Dresbold writes a syndicated column, "The Handwriting Doctor." She is also an accomplished artist. She lives in Pittsburgh, PA.

For more information visit www.michelledresbold.com --This text refers to an alternate kindle_edition edition.

When I first got a call from Commander Ronald Freeman, my heart started pounding. "Oh, no," I thought, "I knew I should have paid those darn parking tickets!" But Freeman didn't even mention the tickets. He said that he had heard through the grapevine that I could "read" people, and asked me to come in for a chat.

At division headquarters, Commander Freeman had a stack of old case files involving handwriting piled on his desk. For hours, he showed me suicide notes, confessions, threatening letters, and other writing, and asked me questions like: "Is this person male or female? How old? Is the writer violent? Suicidal? Honest or dishonest? Straight or gay? Sane or insane? Smart or stupid? Healthy or sick? Go-getter or lazy bum?" After every answer, he smiled. Although he never said so, this was a test.

I must have passed, because a few days later, I got my first assignment: To profile an UNSUB (police lingo for unidentified subject) from a bank robbery note.

After scanning the note for a few minutes, I turned to the detective in charge of the case. "You're not gonna find this guy's prints in your files, because he probably never committed a crime before. He's not a hardcore criminal. Under normal circumstances, he'd never rob a bank. But he's feeling really desperate." The detective nodded his head politely, but I could tell that he was skeptical.

A few days later, the bank robber was in police custody. As I had predicted, he was not a hardened criminal. In fact, he had no previous arrest record. He was a 52-year-old bus driver who tearfully confessed that he needed money to pay for his son's liver transplant. "Without the operation my son will die," he said.

One day, a woman walking her dog on Aylesboro Avenue in Pittsburgh found a mysterious note on the sidewalk. Printed in purple crayon were the words: Ples rascu me. Thinking it could be a desperate plea for help, the woman brought the note to a police station.

The detectives wondered if the note was a hoax. It appeared to be the writing of a child, but was it? And did the writer really need to be rescued?

"It's not the writing of an adult pretending to be a child," I told the lead detective. "It was written by a girl between the ages of five and seven. And I see absolutely no signs of stress or danger in the handwriting, so the writer is definitely not a kidnap victim." Then I added, "It's signed Kealsey."

But who was Kealsey? And why did Kealsey write the note? We turned to the news media, hoping that someone might recognize the handwriting, or something in the note, that could help us unravel the mystery.

That night when I turned on the six o'clock news, a reporter was interviewing another handwriting analyst who proclaimed that he could tell from the handwriting that the note's author was in "grave danger."

The next morning, a man and his daughter walked into the police station. They had seen a photograph of the note in the Pittsburgh Post-Gazette. The 6-year-old daughter, Kealsey, timidly stated that she had written the message to her teddy bear. Her father explained that Kealsey often played detective with her teddy. Somehow the note must have blown out the window and landed on the sidewalk.

Copyright © 2006 by Michelle Dresbold and James Kwalwasser --This text refers to an alternate kindle_edition edition.