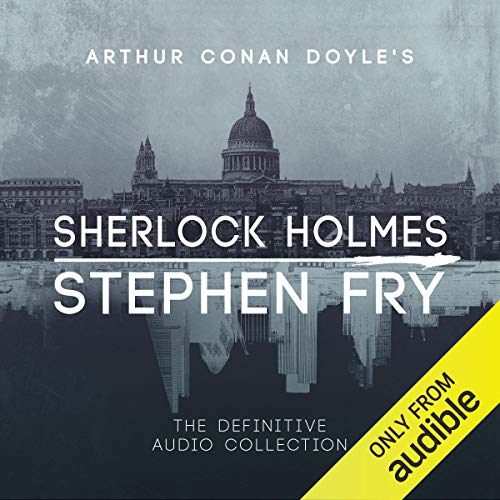 Now updated to include Chapter Name Information, so you can easily find your favourite story or novel

"...it was reading the Sherlock Holmes stories as a boy that first turned me on to the power of writing and storytelling." (Stephen Fry)

Ever since he made his first appearance in A Study In Scarlet, Sherlock Holmes has enthralled and delighted millions of fans throughout the world. Now Audible is proud to present Arthur Conan Doyle's Sherlock Holmes: The Definitive Collection, read by Stephen Fry. A lifelong fan of Doyle's detective fiction, Fry has narrated the complete works of Sherlock Holmes - four novels and five collections of short stories. And, exclusively for Audible, Stephen has written and narrated nine insightful, intimate and deeply personal introductions to each title.

Stephen Fry is an English actor, screenwriter, author, playwright, journalist, comedian, television presenter, film director and all round national treasure. He is the acclaimed narrator of J.K. Rowling's Harry Potter audiobooks and most recently recorded The Tales of Max Carrados for Audible Studios. Stephen has contributed columns and articles to newspapers and magazines, appears frequently on radio and has written four novels and three volumes of autobiography.

4.8 out of 5 stars
4.8 out of 5
10 global ratings
How are ratings calculated?
To calculate the overall star rating and percentage breakdown by star, we don’t use a simple average. Instead, our system considers things like how recent a review is and if the reviewer bought the item on Amazon. It also analyses reviews to verify trustworthiness.
Top reviews

kulvender singh
5.0 out of 5 stars Baker street
Reviewed in India on 25 October 2020
Really good. 80 hours of audible is very long and interesting. A lot of stories to listen to. Not a single boring story.
Read more
6 people found this helpful
Helpful
Report abuse

Vamsi Mohan Krishna
5.0 out of 5 stars Fantastic reading by Stephen Fry
Reviewed in India on 23 March 2021
This is the best collection of Sherlock Holmes novels read by the illustrious Stephen Fry. Thoroughly enjoyable. His reading truly puts the listener in the Victorian British times of the novel.
Read more
Helpful
Report abuse

A Krupakaran
3.0 out of 5 stars Audible Book Review
Reviewed in India on 11 April 2021
The speed was a tad faster to keep track. There were no emotional modulations that helps to sink in to the book / story / character
Read more
Helpful
Report abuse
See all reviews