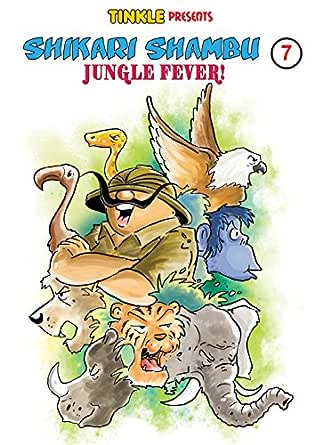 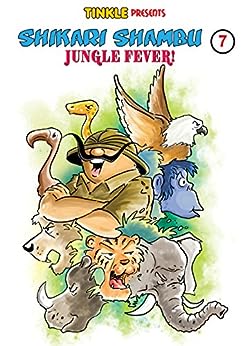 
Who is Shikari Shambu

Shikari Shambu is everything he doesn’t appear to be. Just like his name. Although known as Shikari, he is no hunter. He is a conservationist and a wildlife expert. People turn to him in times of crises. Whether it is about rescuing a wild animal or catching a dangerous criminal, this forest ranger is everybody’s go-to guy. But, lo and behold, Shambu is no brave heart. He is secretly petrified of animals and has no love for adventure. All he seeks is a good, fluffy pillow to sleep on and a day that ends with a satisfied tummy. But trouble always finds its way to Shambu and luck finds him a way out. And the combination of the two creates a hilarious mad-venture! Created by former Tinkle editor, Luis Fernandes, artist V.B. Halbe brought this classic Toon to life. Currently, Tinkle’s Art Director, Savio Mascarenhas, illustrates the series.

Shanti: Shambu’s better and braver half; she pushes Shambu out of his couch and into various adventures even though she knows exactly how cowardly and lazy he is. Jeeva Jeevantak: Shambu’s arch nemesis who is outdone by Shambu and his unfailing luck every single time. However JJ is not one to be discouraged easily

Shambu comes face-to-face with some of the scariest prowlers in the wild. But the adventure doesn’t end there; Shambu also has to rescue animals that have made their way into the city. This Shikari Shambu collection pack has it all. Shambu drives fast cars and jumps off aeroplanes—all in the name of saving animals. What are you waiting for? Grab your pack today. We promise you the adventure of a lifetime

Continuously published since 1980, Tinkle is one of the oldest and most cherished children’s comics magazines in India. It boasts of a large fan following and beloved characters that include such household names as Suppandi, Shikari Shambu and Tantri the Mantri.

4.6 out of 5 stars
4.6 out of 5
11 global ratings
How are ratings calculated?
To calculate the overall star rating and percentage breakdown by star, we don’t use a simple average. Instead, our system considers things like how recent a review is and if the reviewer bought the item on Amazon. It also analyses reviews to verify trustworthiness.

Suman D.
5.0 out of 5 stars Thank you so much
Reviewed in India on 20 October 2020
Very nice 📖
Thank you so much everyone and everything
Nice App
Hello my dear friends
OK bye and good night

Amazon Customer
5.0 out of 5 stars Very nice book
Reviewed in India on 16 July 2020
Its a very nice book i loved it ! tottaly fantanstic!!!!!Thank u tinkle because of u shikari shambhu is my favorite
Read more
Helpful
Comment Report abuse

Abhishek Govilkar
5.0 out of 5 stars Excellent Book
Reviewed in India on 13 November 2020
This os a very good book and funny also. I have liked Shikari Shanbhu always and thos is a must buy book.
Read more
Helpful
Comment Report abuse

Amazon Customer
3.0 out of 5 stars Three Stars
Reviewed in India on 6 May 2018
nice but the cover is very thin l
Read more
Helpful
Comment Report abuse
See all reviews
click to open popover
Unlimited FREE fast delivery, video streaming & more
Prime members enjoy unlimited free, fast delivery on eligible items, video streaming, ad-free music, exclusive access to deals & more.
> Get started
Back to top
Get to Know Us
Connect with Us
Make Money with Us
Let Us Help You
EnglishChoose a language for shopping.
© 1996-2020, Amazon.com, Inc. or its affiliates