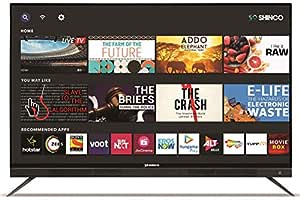 by Shinco
4.3 out of 5 stars 1,453 ratings
| 691 answered questions
10 Days Replacement
1 Year Warranty
1 Year Warranty
1 year standard manufacturer warranty
Currently unavailable.
We don't know when or if this item will be back in stock.
Show More
Save up to 28% with GST input credit

The Shinco 4K Ultra HD Smart LED TV S55QHDR10 will amaze you with it’s extraordinary depth and details whether you are playing an adrenaline-charged action game or watching a sci-fi thriller powered by Quantum Luminit Technology. Enjoy an immense spectrum of realistic colors and visual details, even in the darkest scenes with HDR10. The Built-In Soundbar delivers sonic performance that will enthral you. Uniquely designed StreamWall will let you surf through 1500000+ hours along with Lifetime Free Subscription of MOVIEBOX App that allows you to watch your favourite content in 11 Indian and 5 International Languages under multiple Genres. What's More? It comes with official apps such as Hotstar, Zee5, Sony Liv, Voot, Sun Nxt, Jio Cinema, EROS Now, Hungama Play, Alt Balaji, Shemaroo Me, Yupp TV, Moviebox, Spuul, The Quint, Homeveda along with automatic OTA updates.

4.3 out of 5 stars
4.3 out of 5
1,453 customer ratings
How does Amazon calculate star ratings?
Amazon calculates a product's star ratings based on a machine learned model instead of a raw data average. The model takes into account factors including the age of a rating, whether the ratings are from verified purchasers and factors that establish reviewer trustworthiness.

I am writing this review from a consumer point of view, maybe some points seem relevant to you some not, still bear with me.

PS - I bought this TV after watching the reviews on Techiebeez Channel and other reviewers. Basically, I took a leap of faith.

Cons
1) Ohh, it lags a lot while. Performance is a huge issue. Maybe the 1GB Ram is not enough, neither the 8GB ROM because updates will keep coming in the future. Its, not future proof. Maybe i am a heavy user but it does lags in between apps, lags playing videos in youtube sometimes, i have to switch the tv off - on and then youtube works seamlessly. (with same internet connection ). I really don't know whats the exact issue here.
2) I have a 50 MBPS Internet Connection and I am not able to stream Hotstar in Full HD without skipping frames in between. Was watching a live football match (EPL) on hotstar and the experience was terrible, made me question why i bought this huge tv .With the same internet connection, i can easily stream JIO Tv HD channels but Hotstar just does not play without dropping frames. same thing happend while watching Ind vs WI T20 match today. maybe in movies you won't notice but try watching any live content and you will know what I am talking about.
3) Sony Liv App stopped opening suddenly so i tried to update it, the TV was not able to update it so i tried uninstalling the App and then Updating, after installing every time i click on open , the screen goes to download and just stuck there, now i am not able to use the Sony Liv app, only the icon exists. :(
4) You cant play games, official play store doesn't exist. Huge Con for me because the underline software of the TV is just ridiculous, Anybody who has tried to update any apps will know what i am talking about, you need to be an absolute techie to login and do various other functions.
5) Sometimes the remote will not respond, it's not as seamless as i would have expected it to be, while operating volume buttons, mute etc the remote sometimes just refuses to work. very frustrating for a previous Sony TV user.
6) No Voice Remote (All other TVs in this price range are typically offering a Voice Remote or Control through some app - iffalcon, VU, TCL, MarQ, MI etc etc)
7) It won't play online content in 4K, Full HD is maximum you will get , though it will play 4K content from USB drives.
8) Miracast works seamlessly but Airplay via Eshare App is huge letdown. My MacBook connects with the laptop and the cast starts lagging and then automatically disconnects.

As a consumer when you buy a TV , you atleast look for it to work seamlessly for atleast 5-6 years. Although i really like the picture quality i am really not sure how the performance will be in comings years or say days. After using it for a week i am really not sure about its longevity. The 1GB Ram/8GB ROM is really not a future-proof configuration.
Now i am trying to evaluate Sanyo 55 Inch Tv which is for 51K, i know that the price is pretty much a lot when compared to Shinco but my personal preference is to buy a TV with better configuration so that it could be used for atleast 5-6 years without any issues of space or memory or performance for that matter.

I will update this Review if there are any changes in my experience.

[Update - I have bought an MI 4K Tv Box and all the issues related to smart function of the tv are eliminated now].

Anurag Singh
5.0 out of 5 stars Excellent Quality in this price
Reviewed in India on 26 October 2018
Size name: 55 InchesVerified Purchase
So finally I got the tv and I was really nervous by reading mixed reviews. I called their call centre and within couple of hours technician came to install a tv. I did not go for wall mount as I have tv table so installation was done quickly.
Seems services differ city to city because I have read some bad reviews about installation. Here in Noida it was done very quickly.

I have been researching from last 2 months and seen QLED/OLED almost lot of tvs in showroom. Of course Shinco tv quality is bit inferior to QLED or OLED but those tv are 4-5 times expensive than this. In this price tag, I really feel this is a value for money and you will have 2 years of warranty.

I cant comment on sound because I have JBL soundbar so I have connected it to TV optical to get 5.1 effect.
Remote has no lag and seems fine. Trying to get acquainted with the TV GUI now.

Let me know if you have any questions.

Just to update, HDMI ARC is not working on this tv though they mentioned that on their website.
I am using optical cable now to get sound on my hometheatre.

asim
5.0 out of 5 stars Shinco as indian brand doing good work
Reviewed in India on 12 October 2018
Size name: 49 InchesVerified Purchase
Superb picture quality with true upscaling, play true YouTube 4k video. Sound quality is loud even in 20 to 25 volume. No lag in app.miracast is working fine. Ram utilisation is around 53 to 55% after Continuously run for 5 hour. Shinco people are responsive for installation part, need to check after sell service part. TV is heavy built quality. I think if they have provided 2 GB ram then it will be super se upar. Will update if any thing happen
Read more
189 people found this helpful
Helpful
Comment Report abuse

Gopal
1.0 out of 5 stars App hanged and after 2 days completely hang not working
Reviewed in India on 13 November 2018
Size name: 49 InchesVerified Purchase
I purchased it on 4nov delivery 9 Nov install on dated 11nov it's app hang many time after using 2 days it's completely hanged during power on I restarted many time but when TV was show only isn't responding I'm very disappointed with this
Read more

Deepak Parmar
1.0 out of 5 stars Worst ever tv...Please don't buy
Reviewed in India on 25 January 2019
Size name: 40 InchesVerified Purchase
If you allow me to give minus rating then i will do.

Returned it single day. Guys please don't trust this new company to save few bucks. I got it in just 11500 rs on sale. Now i purchased MI 4A Pro that is amazing experience.
Read more
93 people found this helpful
Helpful
Comment Report abuse

1 )Slim design and Bezels maintained as much as possible to the edge, weighs light.
2) Multiple ports including Ethernet, HDMI, USB, wifi, Built in chrome cast, Always connected to my broadband.
3) Audio quality is good with , UI is great and it's fast as well.
4) TV quality is good, if you have HD DTH that would be great, no problem with viewing angles.
5) Smart TV UI has various customization options, I also installed some apps that provide Free shows, movies, like Hotstar, Jio TV, Jio cinema, Movies HD. Some of these have many inventory of free HD movies and shows and ofcourse YouTube. Also you can update apps to get the latest changes. Really worth it.
6) TV stand that came with it is strong and strudy, still I mounted it on wall.

Overall I don't think why no one will buy this for such a steal! At such an affordable price and from a brand like Shinco, everyone must try this television.
Read more
51 people found this helpful
Helpful
Comment Report abuse
See all reviews from India
Unlimited FREE fast delivery, video streaming & more
Prime members enjoy unlimited free, fast delivery on eligible items, video streaming, ad-free music, exclusive access to deals & more.
> Get started
Back to top
Get to Know Us
Connect with Us
Make Money with Us
Let Us Help You
EnglishChoose a language for shopping.
© 1996-2020, Amazon.com, Inc. or its affiliates