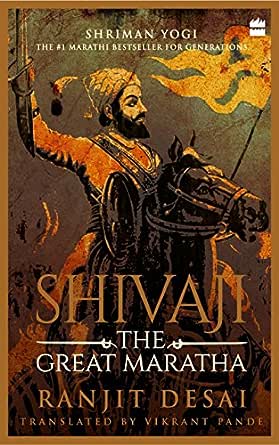 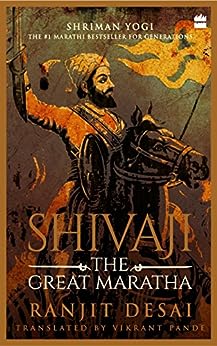 This magnificent chronicle of the life and times of Chhatrapati Shivaji Maharaj is an extraordinary tour-de-force of history, biography and imagination. The epic text of Ranjit Desai s Shriman Yogi finds new voice in Vikrant Pande s nuanced translation, an immersive narrative of the foundations of the Maratha empire and the saga of its charismatic founder.
Namita Gokhale

Young Shivaji reaches Pune, a dying fort city, with his mother Jijabai and lights the first lamp within its ruins. While his father Shahaji Bhosale is away on deputation by the Adil Shah sultanate after having failed in a revolt against it, Shivaji learns how an empire is built from the ground up. Thus begins the life of the Great Maratha.

What awaits Shivaji is nothing short of the vast scroll of history, and it takes him from Surat to Thanjavur and all the way to Aurangzeb s durbar in Agra. He dreams of freeing his land from the clutches of Mughal rule, and though he suffers many defeats and personal losses along the way he never gives up his vision of Hindavi Swaraj. Amidst political intrigue and a chain of skirmishes, Shivaji becomes a leader, a warrior and a tactician par excellence, driven by immense pride and love for his motherland.

This is a new English translation of Ranjit Desai s much-loved Marathi classic Shriman Yogi, and a literary rendition of the life of Chhatrapati Shivaji Maharaj.

Ranjit Desai (1928-1992) is one of the most loved Marathi writers. He received many awards including the Maharashtra Rajya Award, the Hari Narayan Apte Award, the Sahitya Akademi Award, and the Maharashtra Gaurav Puraskar. The Government of India gave him the Padma Shri in 1973. Vikrant Pande has translated works by Ranjit Desai, Milind Bokil and N.S. Inamdar.

J.Sadagopan
5.0 out of 5 stars Good book overall
11 July 2018
Format: PaperbackVerified Purchase
I have read Shivaji - the great maratha. It's a wonderful book. It is simply written - very little hyperbole... brings out the true Shivaji the person as also the king. Shivajis strategy, cunning, bravery, humanism, patriotism and keen intellect are on display for all to see. His yearning for Hindva Swaraj and the focus he brings among the people and galvanises them for the cause is amazing. Not a gripping book in the conventional sense as the book is written in fairly straight forward narrative which moves from event to event and can even look a bit disjointed & loosely strung. But this is still a good read just to know Shivaji... the great maratha for sure!
Read more
7 people found this helpful
Helpful
Comment Report abuse

rahulraj
5.0 out of 5 stars An indispensable book for any bhartiye
14 May 2019
Format: PaperbackVerified Purchase
I am 31 year old and I really repent why I read this book so late in my life.Read it to know our glorious history,Something which a non-maharashtrian bhartiye doesn't knows just because the sickular pathetic education system of our country wants every child to know how great the Islamic invaders or the English were. And we must not take pride on our own hindu rajas or heros who made it impossible for the mughals to rule whole India.
I promise to give this book to my child to read as soon as he/she starts to read decently

Amazon Customer
2.0 out of 5 stars Not impressed :(
13 November 2018
Format: PaperbackVerified Purchase
Had a lot of expectation from this book, it being written by Ranjit Desai. Does not do much to build the character of Shivaji I wanted know. Goes about the legend's life from one incident to another without going into the details of his thinking, reasons and strategy. I mean it does nothing to make the reader understand characteristics that made Shivaji the leader he became and why people followed and were loyal to him. One other major letdown is Jijabai's character whom we know was a major influence on Shivaji and the book does not do justice to her. Maybe my exceptions were wrong but I did not connect with the book.
Read more
2 people found this helpful
Helpful
Comment Report abuse

Amazon Customer
5.0 out of 5 stars Speechless
21 April 2018
Format: PaperbackVerified Purchase
Shri Ranjit Desai - amazing story telling. I can literally imagine all characters live in front of me. There is laughter, tears, and anxiety - all inside this gripping story of a leader who captures/ captivates the imagination of people of my generation even after 330 years of existence.
Almost felt like Shri Ranjit Desai was narrating it live.
Even after the translation, Shri. Vikrant Pande has retained the innocence of the original script.

Adarsh Srivastava
5.0 out of 5 stars Just go for it
24 August 2019
Format: PaperbackVerified Purchase
It's a great read.. the strategies and tactics of Shivaji is explained with nice detailing.. Truly a legend who carved out Maratha Empire from scratch!! I was cynical before purchasing this book but after completing it I was just amazed.. This one is a must buy for all history lovers.. A proper description of Shivaji Raje's valiant personality and his emotional side.
Read more

Go to Amazon.com to see all 2 reviews 5.0 out of 5 stars
click to open popover
Unlimited FREE fast delivery, video streaming & more
Prime members enjoy unlimited free, fast delivery on eligible items, video streaming, ad-free music, exclusive access to deals & more.
> Get started
Back to top
Get to Know Us
Connect with Us
Make Money with Us
Let Us Help You
EnglishChoose a language for shopping.
© 1996-2020, Amazon.com, Inc. or its affiliates