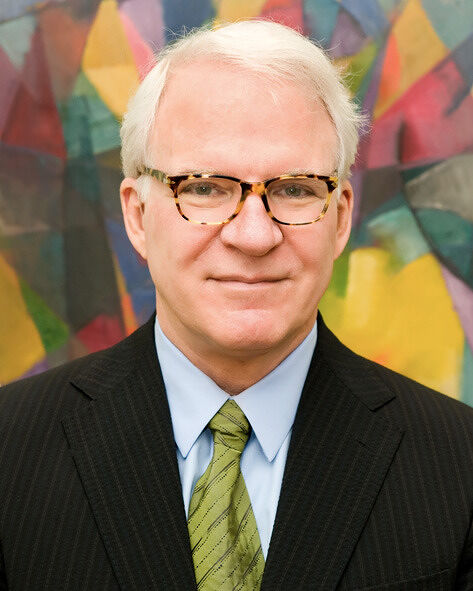 by Steve Martin (Author)
4.1 out of 5 stars 215 ratings
See all formats and editions
Sorry, there was a problem loading this page. Try again.
10 Days Replacement Only
Read more Read less
Previous page
Next page

"Shopgirl has some of Chekhov's autumn light about it: a story remembering all the really fine recent things." -- Talk

"Shopgirl is an Audrey Hepburn of a book: slim, lovely, and ever so old-fashioned." -- People

"Shopgirl reads as smoothly and pleasurably as the novels of the late W.M. Spackman . . ." -- Los Angeles Times

"His prose is almost Zen-like and his revelations superb." -- New York Post

"It's the signature combination of exhilaration and vulnerability that Martin offers us with extraordinary confidence." -- Elle

"The book is like one of Mirabelle's sketches: small, deft, pensive, poignant -- a moving still life." -- Time magazine

Steve Martin is a celebrated writer, actor, and performer. His film credits include Father of the Bride, Parenthood, and The Spanish Prisoner, as well as Roxanne, L.A. Story, and Bowfinger, for which he also wrote the screenplays. He's won Emmys for his television writing and two Grammys for comedy albums. In addition to a play, Picasso at the Lapin Agile, he has written a bestselling collection of comic pieces, Pure Drivel, and a bestselling novella, Shopgirl. His work appears frequently in the New Yorker and the New York Times. He lives in New York and Los Angeles.
Start reading Shopgirl on your Kindle in under a minute.

4.1 out of 5 stars
4.1 out of 5
215 global ratings
How are ratings calculated?
To calculate the overall star rating and percentage breakdown by star, we don’t use a simple average. Instead, our system considers things like how recent a review is and if the reviewer bought the item on Amazon. It also analyses reviews to verify trustworthiness.
Top reviews

mrs m
5.0 out of 5 stars inside the head of a shop assistant
Reviewed in the United Kingdom on 11 July 2013
Verified Purchase
I am a shop assistant, but my life is not actually like the main character in this book, though it is amazing how Steve Martin gets inside the skin of the bored young lady behind the glove counter as well as her friends and colleagues in some brilliant vignettes that bring to life each character's foibles. I hate to give away the details, but there is a description of one of her colleagues that is a classic little bit of workplace naughtiness. This is such a neat story; no words are wasted, but he has a turn of phrase that is really enjoyable to read. It's quite a short book, but small is beautiful and it has the required satisfying beginning, middle and end. Thankyou Steve Martin!

More authors ought to read this before they put pen to paper. It's the model of a perfect read.
Read more
2 people found this helpful
Report abuse

Sarah
5.0 out of 5 stars It's a book
Reviewed in the United Kingdom on 8 October 2020
Verified Purchase
Loved the film so wanted to read the book
Read more
Report abuse

Clipper 314
4.0 out of 5 stars Nice gentle story and same for the film
Reviewed in the United Kingdom on 6 August 2013
Verified Purchase
Well done to write a nice human story considered to be semi autobiographical. Loved the film of the book and enjoyed the tale of relationships in print. Funny, quirky, sad and happy... just like life if you are lucky ! A fairly short novella but tells everything it needs to.
Read more
Report abuse

Xox
5.0 out of 5 stars The wonderful other side of Mr Martin
Reviewed in the United Kingdom on 2 October 2020
Verified Purchase
Painfully moving. A readover and over. Although I hear his voice as I read, but wish it was an audio book too.
Read more
Report abuse