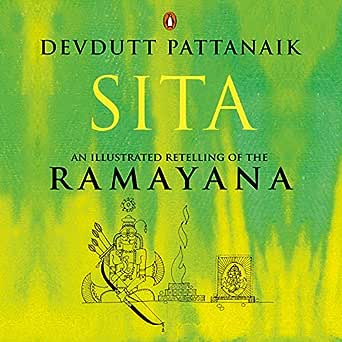 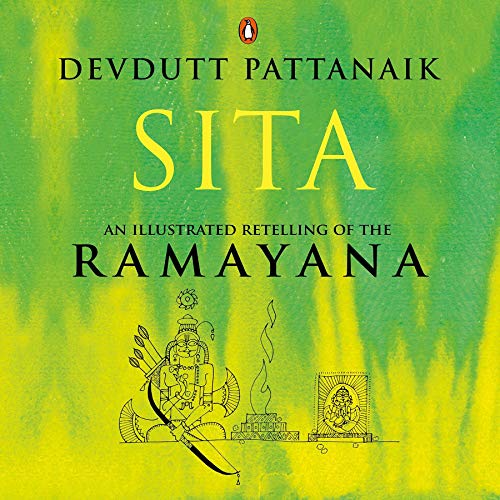 Sita: An Illustrated Retelling of the Ramayana

4.5 out of 5 stars
4.5 out of 5
683 global ratings
How are ratings calculated?
To calculate the overall star rating and percentage breakdown by star, we don’t use a simple average. Instead, our system considers things like how recent a review is and if the reviewer bought the item on Amazon. It also analyses reviews to verify trustworthiness.

Rajeev Patel
5.0 out of 5 stars Another Masterpiece
Reviewed in India on 28 February 2019
Verified Purchase
Book Review-
Book Name - Sita
Devdutt Pattanaik's books are well-known in India. His style of storytelling is mesmerising; his knowledge of Indian mythology is erudite. Not only that, he thoroughly studied different Ramayanas spoken in India and abroad, and interpreted them in a contemporary style and easy language. This is not an easy thing. He provides open-ended explanations of every incident in the epic. His purpose is not to glorify Ram or what is called Hindutva today -- he reveals the inner beauty of a story that is enriched by the storytellers and scholars of an entire nation. Even the later modifications and inclusions in the epic evokes awe and amazement. Devdutt has very successfully done that. This is useful not only for an interested general reader, but also for a researcher of Indian mythology or ancient cultural studies. I would recommend this book as another Indian classic.
My Rating for this book is 5/5
Book Cover - 4/5
Narration and conceptualisation - 4.5/5
A highly recommended book.

Kartik Mishra
1.0 out of 5 stars I am disapointed.
Reviewed in India on 3 April 2017
Verified Purchase
I received a pirated copy. Not the original. I didn't have this kind of a poor experience before but I am surely disappointed.
Read more

Dr. RAMAKRISHNA Easwaran
5.0 out of 5 stars Sitayana from the Ramayana
Reviewed in India on 7 November 2017
Verified Purchase
Having read many versions of Ramayana, I realized after reading this book, that I was all the time looking at the trees. Thank you Pattanaik for making me appreciate the forest. Mind expanding, to use the author's own words. The way the author manages to deliver a gripping narration of a well-known story is admirable but what is astonishing is how he achieves a balance of the inherent duality of characters, their mindscapes and incidents. Most English versions present the story as seen through western eyes but this book celebrates its Indianness. Loved the final portions the best.
Read more
10 people found this helpful
Helpful
Comment Report abuse

THIS BOOK REVIEW IS ONLY BASED ON MY FEELINGS DURING READING THE BOOK. IT DOES NOT INTENT TO HURT ANYONE’S FEELINGS, AND DOES NOT MEANT TO COMPARE WITH ANY OTHER REVIEWER’S FEELINGS.
“I’ve got few questions. Are you ready to answer??????”

Ram is called Maryada Puroshottam, but supporting the wrong demands of his step-mother, was it actually a Dharma?
Abandoning your own wife, to keep the Scion out of controversy from the society, do not you have any responsibility towards your family?
Lakhsman kept his wife remain in place during the exile for fourteen years. Don’t you have any responsibility towards your wife too?
Lakhsman killed Indrajit during his Yagna. Is not it beyond the rules of Dharma?
Well, There are many questions like these can come to a reader’s mind when he goes through the Ramayana. The epic, to me, seems to be pure representation of Patriarchal society prevailing in India. Yet SITA is called the Ideal woman. So in terms of Early Indian society, a woman must only dutiful to her father’s family first, then to her husbands, try to keep her husband always happy, to keep her husband’s family have to sacrifice herself etc. Is not it kind of a Bonded Labor system?

Ramayana, the first epic of the Indian subcontinent, retold for generations in thousands of languages, read in the faraway lands, is truly considered a holy book for the Hindus. Lord RAMA, his wife SITA, and their disciple HANUMAN are more than GOD, they are their religion. However when sage Valmiki first wrote the book or when the story was first spreading throughout the land from around 500 BCE these characters were just the heroes of the book, no devotional angel was behind their name. But during the Islamic Revolution from 1000 CE onward, the characters started getting a devotional angel.

From then the stories were re-written in many languages, stories added and removed, but one common theme always remained; Ram is Maryada Purushottam, for him the Dharma is the highest virtue, for him to keep his father’s words he exiled himself to the forest for fourteen years denouncing the claim of the throne, he abandons his wife so keep the purity of his family, for him, his subjects are more important than his family etc.

Amazon Customer
5.0 out of 5 stars New approach.
Reviewed in India on 27 April 2018
Verified Purchase
Wow. No words to describe the pleasure and wisdom I got from reading this Ramayana. Devdutt ji , you simply rock. We come through Sita as strong woman with high values in life . I wish each and every woman read this book as it depicts Sita as a woman who loves Ram and choses to undergo hardships for love and not because she had to or forced to. She gracefully accepts everything and comes out successfully. She shows her presence of mind even during calamity when drops her jewellery when Ravan abducts her. Her friendship with rakashis is so beautifully depicted. I finished the book in one sitting. New approach to the epic that teaches us to reach for divinity even in midst of worldy life. Think and act. Be aware in all situations and then a forest can become a home with love. Devdutt ji my humble pranams to you. Thank you.
Read more
2 people found this helpful
Helpful
Comment Report abuse
See all reviews

Buyer
5.0 out of 5 stars Five Stars
Reviewed in the United Kingdom on 12 July 2018
Verified Purchase
Beautifully written and illustrated. It was the perfect Ramayana to buy for my 9-year-old daughter.
Read more
Report abuse

anjana odedra
5.0 out of 5 stars Best retelling
Reviewed in the United Kingdom on 1 January 2015
Verified Purchase
The epic is presented in an easily acsessible way. The pictures are brilliant and there is a lot of extra information.
Read more
One person found this helpful
Report abuse

Jagdeep
5.0 out of 5 stars A Historian's Delight!
Reviewed in the United States on 19 December 2014
Verified Purchase
This is not just a story called "Ramayana"....this is, in fact, a comprehensive treatise on the ideology of true Dharma.... the cultivation, protection and sustained practice of unflinching loyalty to one's sense of duty. Devdutt Patnaik, in his inimitable style interprets and expands on the characters and events that make up the wonderful epic, keeping Sita as the protagonist from whose perspective the epic is explored.
The beauty of the writing is in its simple narration yet hard-hitting rationale, in-depth analysis of characters, their roles and exploits and the significance of events and milestones in shaping the destiny of a civilization as it grows, and leaving in its wake, a rich treasure trove of wisdom, encouragement and inspiration.
Read more
4 people found this helpful
Report abuse

Chandu
5.0 out of 5 stars A story I'm never tired of listening to or reading about - bought to life in a new manner
Reviewed in the United States on 2 December 2013
Verified Purchase
Devdutt Pattanaik has bought Hindu mythology alive in the new millennium. He's given people like me a chance to dip into the well of Hindu philosophy. His analysis and de-construction of mythology gives you food for though. Hopefully it will up my spiritual quotient. Sita is no exception to this. A wonderful story re-told and I'm never tired of listening to it.
Read more
3 people found this helpful
Report abuse
See all reviews
Unlimited FREE fast delivery, video streaming & more
Prime members enjoy unlimited free, fast delivery on eligible items, video streaming, ad-free music, exclusive access to deals & more.
> Get started
Back to top
Get to Know Us
Connect with Us
Make Money with Us
Let Us Help You
EnglishChoose a language for shopping.
© 1996-2020, Amazon.com, Inc. or its affiliates