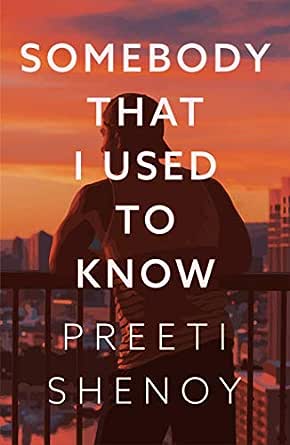 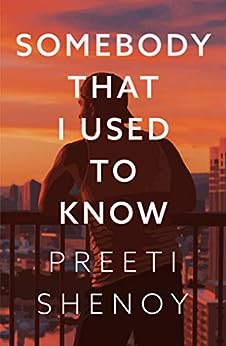 Somebody That I Used to Know Kindle Edition

Preeti Shenoy is an Indian novelist who has written twelve bestsellers. She has been featured in BBC World, Cosmopolitan and all major media. Her next book, When Love Came Calling, is young adult fiction and will be out on 17 August 2020.

4.1 out of 5 stars
4.1 out of 5
188 global ratings
How are ratings calculated?
To calculate the overall star rating and percentage breakdown by star, we don’t use a simple average. Instead, our system considers things like how recent a review is and if the reviewer bought the item on Amazon. It also analyses reviews to verify trustworthiness.

Amazon Customer
1.0 out of 5 stars Disappointment
Reviewed in India on 14 October 2020
Verified Purchase
Not expected from a great author that I used to follow. End could have been better if Akhil would have been fight for Nithya
Read more
Helpful
Report abuse

Manoharan
2.0 out of 5 stars Disappointed
Reviewed in India on 8 August 2020
Ms. Shenoy had brought well the stereotypical mindset of Society who is being judgemental on others. But the story line is really not that great. The main characters were Emotionally trapped in one way or the other and unable to stand for themselves as if by saying their hands were tied, can't get rid of this.

Having said the Dominic effect here, the storyline is weak and Anil & Nithya were not vocal about their relationship she is blindfolded and fooled by emotions.
Read more
10 people found this helpful
Helpful
Report abuse

Bipasa Mund
5.0 out of 5 stars One of the most well-depicted short story
Reviewed in India on 2 September 2020
The book begins on the note that how the societal norms about what is normal and how people should behave while being in love is so distorted and has been made just so that the people around those lovers can have a peaceful and normal life.
With this the story is projected into the life of Akhil who is penning down his thoughts and emotions into his diary about the rough situations and feelings that he has been facing lately.
Akhil is a guy who originally hails from a small village in Kerala but has been residing in UK with his aunt ever since he was six.
He constantly takes therapy sessions from his therapist Hannah and that's how he came about writing his thoughts on his diary.
As the book progresses, we are introduced to Joe and Melissa. Joe is Akhil's friend and business partner in their social media marketing agency and Melissa is a friend whom Akhil dated for a brief while but broke up for reasons you would know as you read further. It is Melissa who suggested Hannah as a therapist for Akhil.
As the book progresses, it becomes more and more clear that Akhil is in love with Nithya, a girl from India whom he met on a trip to India and has been distraught from unfulfilled love. But whether that love was reciprocated from the other end also or was it only a one-sided love or was there rejection all these questions won't be dealt with up until page 23 where you would be introduced to Nithya for the very first time.
But before that various characters and their relationship with Akhil is discussed, like that of Joe, Melissa, Hannah, Akhil's aunt and few more.
In few counselling sessions, it is revealed that Akhil had a troubled childhood with his distraught and abusive father and his mother's accidental death before his migration to UK with his aunt.
How Akhil came to meet Nithya, whether love blossomed between the two or not and what happened all of which answers you would get after reading the book.

This book provides a great plotline, amazing writing style. It would get you hooked right from the start and there are no loose ends so that you won't feel disappointed to have guessed the ending from the start.
This is a really nice book.
Go for it.
Give it a read.
I loved it.
You will empathize with the character you will root for him and further more, well you have to read it for yourself to know that.
I give it 5 out of 5 stars.
Read more
3 people found this helpful
Helpful
Report abuse

Preeti
5.0 out of 5 stars Story to be felt more then just reading
Reviewed in India on 11 August 2020
I like the feeling of love... People must be judgemental while reading it... Bt lets not be judgemental and try to feel wt writer is trying to convey... Nice book
Read more
5 people found this helpful
Helpful
Report abuse

Bibliophile Reads Blog
4.0 out of 5 stars Good short story
Reviewed in India on 12 August 2020
A good short story based on an unusual love, where evil sometimes resides in what is considered right in society.
It is a story about the relationship between parent & child and how the suppressed past can mess up one's life if not confronted. The story has a dark theme but not a depressing one.
You can finish reading this in one go. Won't regret reading this.
Read more
One person found this helpful
Helpful
Report abuse

hema
5.0 out of 5 stars Beautiful!
Reviewed in India on 14 September 2020
Short & beautiful .. It's a perfect love story , will leave you feeling very warm & soothing .. Please do read it without a second thought.. Whether you are goin into a relationship or already in one or facing a breakup !
Read more
2 people found this helpful
Helpful
Report abuse

Keira
4.0 out of 5 stars Dark.
Reviewed in India on 27 August 2020
I love Preeti Shenoy, for starters.
So far, all the books I've read of hers have been from a female POV, this was different. And this different was scary good. Right off the bat, there was a mysterious aura in the story, that was soon driven off to a cliche. I thought I'd be disappointed by this, but I wasn't. The ending gave me chills.
Read more
One person found this helpful
Helpful
Report abuse

Amazon Customer
2.0 out of 5 stars Not that good
Reviewed in India on 20 March 2021
Storyline is not that bad but there are a lot of unwanted characters, information and flashback narrations which serves no purpose to the advancement of the story and make the narration messy. The whole story feels hollow and made up. A lot of telling which doesn't create an emotional connect. Could have been better if the writing stlye, setup and world building was effective.
Read more
Helpful
Report abuse
See all reviews
click to open popover
Back to top
Get to Know Us
Connect with Us
Make Money with Us
Let Us Help You
EnglishChoose a language for shopping.
© 1996-2021, Amazon.com, Inc. or its affiliates