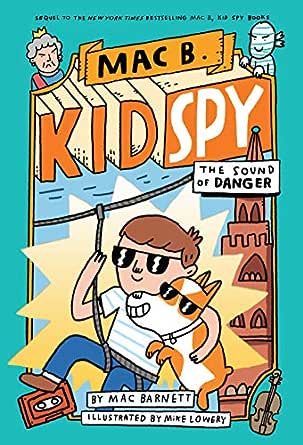 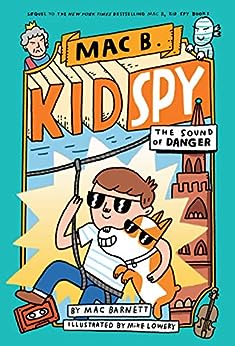 The Sound of Danger (Mac B., Kid Spy #5) Kindle Edition

Praise for Top Secret Smackdown (Mac B., Kid Spy #3):"Exciting action sneakily infused with points about the relationship between reality and story, delivered by a narrator who can claim with literal truth that he saved the day "on porpoise." -- Kirkus Reviews"Mac, kid spy international, is back! On special assignment from the Queen of England herself, Mac drops everything back in the United States to assist in a missing raven caper in which the Russians may be involved. This short chapter book, with a familiar graphic style from previous volumes, does not disappoint. Mac travels all the way to Iceland to track down spies and the Queen's beloved corgis somehow get entangled in the adventures as well. Silly high jinks ensue as Mac saves the day in this third installment. VERDICT Highly recommended for fans of the series, this title features more of the wacky humor they have come to expect." -- School Library JournalPraise for The Impossible Crime (Mac B., Kid Spy #2): :A New York Times bestseller!"Barnett opens his casebook again-this time to solve a classic locked-room mystery...Almost every page contains Lowery's illustrations, loosely drawn and garishly colored in green and orange, which give the whole affair a zany feel that is much enhanced by the narrative with its running gags. Kudos to a pint-size Poirot, pre-Mustache!" - Booklist"Barnett's signature dry wit and snappy back-and-forths, particularly between the ingenuously sincere Mac and the standoffish Queen, keep the story steadily moving forward; a convoluted historical account of Colonel Blood's attempted robbery...Lowery's cartoony spot art, in black, green, and orange, provides additional historical and cultural information and frequently supports the narrative." - Horn Book"Barnett and Lowery team up again in this second outing of international espionage mystery with royal overtones... this is a nifty mystery for young readers and a worthy sequel to the first." - Kirkus ReviewsPraise for Mac Undercover (Mac B., Kid Spy #1):A New York Times bestsellerAn Amazon Best Book of 2018* "Barnett and Lowery bring the funny to the serious art of espionage in a perfect interplay of text and illustration...Barnett interweaves tidbits of global history fit for trivia lovers, while Lowery's comic-style images play a key role in the humor...Told with a sense of nostalgia for 1980s history and pop culture, the silliness and originality of this book will hook young readers." -- School Library Journal, starred review"Barnett takes his readers on a fun-filled ride...Barnett's tone throughout the story is humorous, lighthearted, and a little glib, and the over-the-top story is sure to appeal to many readers...an enjoyable romp that will leave readers salivating for the sequel." -- Kirkus Reviews"[Barnett's] riotous series debut as an adult recalling a 1980s childhood caper...goofy, two-color pictures by Lowery (the Doodle Adventure series) ramp up the silliness of this adventure...which should snare even the most hesitant readers." --Publishers Weekly"Barnett's knack for both quirky situational humor and heartfelt sentiment work in tandem to create a balanced-while still outrageous-early-chapter-book caper. Lowery's frequent cartoony black, yellow, and blue spot illustrations are integral to the narrative, providing clues to eagle-eyed readers and enhancing the humor." --The Horn Book"Barnett's series falls squarely in line with works from Jon Scieszka's and Dav Pilkey's oeuvres, offering kids another solid choice for what to read next." -- The Bulletin of the Center for Children's Books"Funny as a crumpet. (But truly, secretly a hundred times smarter.)"--Jon Scieszka, author of Caldecott Honor The Stinky Cheese Man and Other Fairly Stupid Tales and the New York Times bestselling series Frank Einstein."With a perfectly absurd premise, dialogue that demands outlandish accents, and a plot that interweaves global history and complete silliness, Barnett royally nails it." --Abby Hanlon, author of the Dory Fantasmagory series.Praise for Mac Barnett:"[Mac Barnett is] a great young writer of books for young people. If you haven't read his work, run somewhere and do that. Books for young people have a rich and I daresay limitless future--knock anyone who says otherwise into a ditch--and Mac has a central place within that limitless future. Don't bet against him or anyone like him." --Dave Eggers"[In Barnett's books] there is no magic solution to any problem: The characters stumble through their dilemmas just as every one of us does. The world is a difficult yet good place, and there is no need for the typical rose-colored lenses that other children's books put on situations in order to fend off the bad stuff." --Yiyun Li"He is a believer that picture books can have Swiftian absurdity and untidy endings, and that 'life is absurd, and kids know that.'"-- The San Francisco Chronicle --This text refers to an out of print or unavailable edition of this title.

Mac Barnett is the author of several books for children, including The Important Thing About Margaret Wise Brown, the New York Times bestselling The Wolf, the Duck, and the Mouse, the Caldecott Honor Book and E.B. White Read Aloud Award-winner Sam and Dave Dig a Hole, and the Caldecott Honor Book and Boston Globe-Horn Book Award-winner Extra Yarn. He is the co-author, with Jory John, of the New York Times bestselling series The Terrible Two. He lives in California.

Mike Lowery is an illustrator whose work appears in everything from greeting cards to children's books. He is the creator of the Doodle Adventures series and the Everything Awesome About series and is the illustrator of several other books, including Gingerbread Man on the Loose and the Mac B., Kid Spy series. He currently lives with his wife and two children in Atlanta, Georgia. For more information, visit mikelowery.com, or follow him on Instagram, @mikelowerystudio. --This text refers to the audioCD edition.

4.9 out of 5 stars
4.9 out of 5
331 global ratings
How are ratings calculated?
To calculate the overall star rating and percentage breakdown by star, we don’t use a simple average. Instead, our system considers things like how recent a review is and if the reviewer bought the item on Amazon. It also analyses reviews to verify trustworthiness.

swissalp
5.0 out of 5 stars Good book for a little bookworm
Reviewed in the United Kingdom on 5 September 2020
Verified Purchase
My grandson loved this book
Read it in 2days
Read more
Report abuse

Anthony Positano
5.0 out of 5 stars Hardcover
Reviewed in Canada on 20 November 2020
Verified Purchase
Purchased as a gift and very happy with the product. Impressive quality with no damage during delivery.
Read more

5.0 out of 5 stars Hardcover
Reviewed in Canada on 20 November 2020
Purchased as a gift and very happy with the product. Impressive quality with no damage during delivery.
Images in this review

Stephanie Labbe
5.0 out of 5 stars Mac B is our favorite book series for our
Reviewed in the United States on 17 September 2020
Verified Purchase
I bought the first Mac B book for my 2nd grade (now 3rd grade) twin boys to read. Although I intended for them to read the books themselves, I started off by reading it to them at bedtime. Immediately, all three of us were HOOKED (my husband likes it too)! This book series is BY FAR our favorite series for their age group. Even as a parent, I looked forward to reading it every night. The only negative part is that we get through them very quickly. They are real page turners... There is adventure, mystery, and they are hilarious. One of my sons has decided to start rereading them over again. That is saying a lot because he's not a fan of independent reading. We hope there are more to come!! Please!! Pretty please!!?!
Read more
2 people found this helpful
Report abuse

Ehmuhlee
5.0 out of 5 stars Mac does it again
Reviewed in the United States on 14 October 2020
Verified Purchase
I always love Mac Barnett's creative stories that are just as much fun to read as a child of the 80s. This series doesn't talk down to kids, but is engaging, filled with adventure, suspense, fun, mayhem, history, geography, and a bit of mischief. Mike Lowery's illustrations are also charming and delightful. This is a series that I will always have pre-ordered and anxiously anticipate the next installment.
Read more
One person found this helpful
Report abuse

Emily Doelger
5.0 out of 5 stars 5 Stars and a huge Thank You to the author
Reviewed in the United States on 22 October 2020
Verified Purchase
I want to thank the author for his ingenious creation. Thank YOU! My 9-year-old and I love reading the books together. Not only are the books witty and hilarious, but I also get to reminisce about my childhood. Who doesn’t want to laugh about New Kids on the Block and old tape cassettes that Generation X spent hours winding back together with their little pinky fingers?! Then there is the added bonus of explaining it all to your child who has no clue what you’re talking about.
Read more
Report abuse
See all reviews
click to open popover
Unlimited FREE fast delivery, video streaming & more
Prime members enjoy unlimited free, fast delivery on eligible items, video streaming, ad-free music, exclusive access to deals & more.
> Get started
Back to top
Get to Know Us
Connect with Us
Make Money with Us
Let Us Help You
EnglishChoose a language for shopping.
© 1996-2021, Amazon.com, Inc. or its affiliates