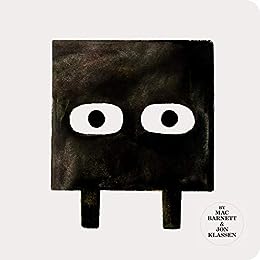 Square’s efforts to please are equal parts hilarious and cringeworthy, and the moment he topples over in exhaustion is comic gold. The story’s decidedly ambiguous conclusion leaves the door open for questions about what it means to be an artist—and that’s the whole point.
—Publishers Weekly (starred review)

This book takes a sweeter turn from its prankish predecessor in that Square works hard to create something for Circle, only to feel like he failed; but when Circle sees what he created, she is “beguiled” once more by his genius. Though this title will stand alone, children familiar with Triangle might recognize the extra layer of humor at the end when an unnamed narrator poses a game-changer of a question. A must purchase that will satisfy old fans and create new ones.
—School Library Journal (starred review)

Funny and lightly philosophical, Barnett’s story gets an extra punch of hilarity with Klassen’s minimalist graphite-and-watercolor artwork. A must for Triangle fans that will leave them wondering how this geometric drama will end.
—Booklist

With typically deceptive minimalism Klassen places a few flat, blocky shapes on the white pages to suggest the physical landscape, angling Square's body and glance to convey the emotional one. Humor is in the details: a bit of twig that catches on harried Square's head and stays there; the shadow that appears beneath Circle as she floats along through the air. For all its brevity, chockablock with philosophical topics to ponder and debate.
—Kirkus Reviews

Barnett’s text is funny and profound, raising philosophical questions about intent, genius, and truth. Klassen’s trademark eyes do a lot of emotive work amid the spare, fantastical set- ting. Angled lines (in the rocks, plants, and slanting rain) and white space direct readers’ own eyes across each page or spread, and short sentences, smart dialogue, and word repetition keep the story moving at a steady pace. Readers looking for a compelling read-aloud will not be disappointed.
—The Horn Book

There’s a ’60s flair to this story of friendship and artistry; the text is spare yet robust, with a lot of meaning behind the carefully selected words, and the open-ended conclusion will give kids much to discuss. Klassen’s watercolor, graphite, and digital art is animation ready, with simple textured shapes against white backgrounds...While the story could provoke discussions about expectations and friendships, this title is most at home as an original entry in art curricula.
—Bulletin of the Center for Children's Books

Square attempts to make a Circle sculpture that will be as perfect as his friend is...Children will no doubt find the results hilarious. The droll illustrations by the Niagara Falls, Ont., native Klassen, in subtle shades of gray, brown and blue, endow these friends with personality and Barnett's simple text is perfect.
—The Buffalo News

Droll, subdued and enigmatic, this second volume of a planned trilogy will delight children ages 5-9.”
—The Wall Street Journal --This text refers to the hardcover edition.

Mac Barnett is the author of numerous books for children, including four illustrated by Jon Klassen: The Wolf, the Duck, and the Mouse; Triangle; Sam and Dave Dig a Hole, winner of the E. B. White Read Aloud Award; and Extra Yarn, which won a Caldecott Honor and a Boston Globe–Horn Book Award. Mac Barnett lives in California.

Jon Klassen is the author-illustrator of I Want My Hat Back, a Theodor Seuss Geisel Honor Book; This Is Not My Hat, winner of the Caldecott Medal and the Kate Greenaway Medal; and We Found a Hat. He is also the illustrator of two Caldecott Honor books, Sam and Dave Dig a Hole and Extra Yarn, both written by Mac Barnett. Jon Klassen lives in Los Angeles. --This text refers to the hardcover edition.

4.8 out of 5 stars
4.8 out of 5
575 global ratings
How are ratings calculated?
To calculate the overall star rating and percentage breakdown by star, we don’t use a simple average. Instead, our system considers things like how recent a review is and if the reviewer bought the item on Amazon. It also analyses reviews to verify trustworthiness.
Top reviews

kat b
5.0 out of 5 stars So funny, I bought it for my adult friend
Reviewed in India on 16 June 2018
Verified Purchase
Square is one of the funniest children's books I ever seen, and it's my favourite of all the Mac Barnett & Jon Klassen collaborations, which are all brilliant. The dry humour and clever illustrations are so good that I bought this book for my adult friend.
Read more
One person found this helpful
Helpful
Report abuse
See all reviews

Q
4.0 out of 5 stars Lovely, fun illustrations
Reviewed in the United Kingdom on 27 April 2019
Verified Purchase
My class (3-4yrs) adore this trilogy of books. We’re hoping for more in the future. Square is similarly illustrated to triangle and circle. It has a slightly trickier storyline for this age group but once we unpicked it together they loved it as much as the others. They’re brilliant books for new vocabulary and concepts. We’ve learnt the words genius and reflection and the class are keen to show off their new vocabulary. It also gave us an interesting discussion about how we might not always think our work is great but others might really like it. It’s great reflection for the perfectionists in the class.
Read more
One person found this helpful
Report abuse

Mark
5.0 out of 5 stars Really love Jon Klassen's style.
Reviewed in the United Kingdom on 13 June 2020
Verified Purchase
This is a lovely little book!

Very similar to another title we've got by the same author Jon Klassen. It's quite quirky, direct & fun. A very unique art and writing style. My little boy loves his books.

I'd highly recommend it!

Albert Wilce
5.0 out of 5 stars Delightful
Reviewed in the United Kingdom on 2 February 2020
Verified Purchase
Beautiful and emotional. I’ve bought several in this series for my girlfriend. She is 31.

I don’t know if they are intended for children or adults really, but there is something heartwarming about every one of this series.

Dudu
4.0 out of 5 stars A little difficult to understand
Reviewed in the United Kingdom on 20 November 2020
Verified Purchase
Great quality book and illustrations.
But the story Does not grip the children enough.
The moral of the story is not clear.

Mk.S
5.0 out of 5 stars Great fun
Reviewed in the United Kingdom on 15 March 2021
Verified Purchase
Simple fun stories with a moral tale.
Read more
Report abuse
See all reviews
Back to top
Get to Know Us
Connect with Us
Make Money with Us
Let Us Help You
EnglishChoose a language for shopping.
© 1996-2021, Amazon.com, Inc. or its affiliates