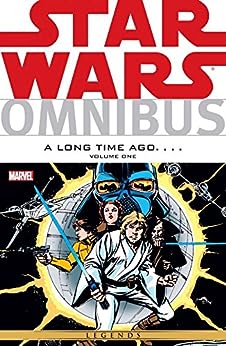 4.4 out of 5 stars
4.4 out of 5
60 global ratings
How are ratings calculated?
To calculate the overall star rating and percentage breakdown by star, we don’t use a simple average. Instead, our system considers things like how recent a review is and if the reviewer bought the item on Amazon. It also analyses reviews to verify trustworthiness.
Top reviews

innstua
5.0 out of 5 stars Worthy of the name Star Wars
Reviewed in the United Kingdom on 3 October 2017
Verified Purchase
Enjoyable read and good interpretation of one of the greatest movie ever made and extra stories based on Star Wars characters well worth having in your collection 👍🏻👍🏻👍🏻👍🏻👍🏻😎
Read more
Report abuse

Harmony K.
5.0 out of 5 stars loved it
Reviewed in Canada on 9 July 2010
Verified Purchase
The original Marvel comics ran for 107 issues. This volume collects the first 27 of them.

Issues 1..6 are a novelization of the movie that started it all in 1977, A New Hope. (That is, 115 pages out of 490, if you care to know.)
Then a few issues are about Han Solo and Chewie and a green human-sized carnivorous rabbit, performing some seriously heroic acts, etc.
Lots of fun.

Since these comics were written before the second and third movie, do expect inconsistencies. For example Jabba makes a tiny appearance and he looks like a seal on two legs rather than the famous snail-like creature from Return of the Jedi.

From an artistic point of view... I've seen better Star Wars comics, where Han and Luke and Leia looked very much like the actors who played them in the movies. It's not the case here. Still, I did enjoy the artwork. It's not bad at all.
Read more
3 people found this helpful
Report abuse

DARIN CLEATOR
5.0 out of 5 stars Good Joob.
Reviewed in Canada on 26 December 2019
Verified Purchase
Goog job.
Read more
Report abuse
See all reviews
Back to top
Get to Know Us
Connect with Us
Make Money with Us
Let Us Help You
EnglishChoose a language for shopping.
© 1996-2021, Amazon.com, Inc. or its affiliates