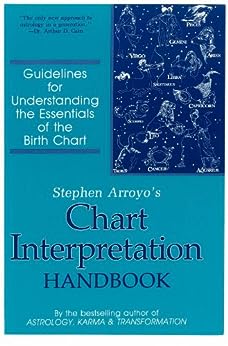 STEPHEN ARROYO's eight books have made him one of the best-selling authors of modern astrology books worldwide. Among his works are Astrology, Psychology & the Four Elements; Astrology, Karma & Transformation; Relationships and Life Cycles; Stephen Arroyo's Chart Interpretation Handbook, & Exploring Jupiter. His writings have elicited such tremendously enthusiastic response internationally that they have now been translated into 20 languages, and he has been awarded the British Astrological Association Astrology Prize, the Fraternity of Canadian Astrologers' International Sun Award, and United Astrology Congress's Regulus Award. Arroyo's work spans the spectrum of modern, psychologically oriented astrology, supported by his many years of one-to-one counseling work (he holds a California Marriage, Family & Child Counseling license), and body- and energy-centered therapies such as Polarity Therapy. With a background in mathematics and the arts (an honors degree in literature from University of California), and a master's degree in psychology, Stephen Arroyo has developed a system in which the individual's experience is foremost, disregarding the fatalism and negativity of old-fashioned astrology. His writings are renowned for the reliable methods he has distilled for understanding astrological principles in relation to the human energy field, in a way that people of all cultures and backgrounds can easily relate to. As Library Journal stated, "his work is particularly notable for his unique ability to express complex concepts in clear, simple language that the reader can identify with and apply in his or her own life." In addition to numerous appearances in the USA, Arroyo has been a guest speaker or seminar leader in the UK, Spain, France, Italy, Mexico, and Switzerland. He has taught some of the first college courses on astrology in the USA, at four different schools. --This text refers to the paperback edition.

4.6 out of 5 stars
4.6 out of 5
402 global ratings
How are ratings calculated?
To calculate the overall star rating and percentage breakdown by star, we don’t use a simple average. Instead, our system considers things like how recent a review is and if the reviewer bought the item on Amazon. It also analyses reviews to verify trustworthiness.
Top reviews

Astro Man
5.0 out of 5 stars Very Practical and Sensible Guidebook
Reviewed in India on 29 July 2015
Verified Purchase
Very clear, concise and practical book. A ready reckoner for any serious astrologer. Gives all the necessary details about Signs, Houses, Planets. The words and phrases used are highly well researched and are NOT use loosely. Makes a very sensible and practical guide book for any professional astrologer. For a beginner, this book is a the best resource to read in the shortest possible time. For the advanced pro, this is a key-book of ready reference. Must have for all astrology practitioners.
Read more
2 people found this helpful
Helpful
Report abuse
See all reviews

AstroStudent20
5.0 out of 5 stars Interpretation handbook
Reviewed in the United Kingdom on 20 March 2020
Verified Purchase
I’ve heard a lot of good reviews about this book, was recommended by my tutor, can’t wait to sit and read when I have the time!
Read more
Report abuse

Wend
5.0 out of 5 stars Really informative book
Reviewed in the United Kingdom on 9 October 2014
Verified Purchase
I have found this book really useful and informative for my studies. It is great to read as a whole but also dip in and out of for information about signs and planets. It is simple to read and you don't need to know masses in order to understand it. Well worth reading if you want to know more about astrology.
Read more
3 people found this helpful
Report abuse

Sarah KL
4.0 out of 5 stars Great introduction to the Natal Chart
Reviewed in the United Kingdom on 26 June 2003
Verified Purchase
This was one of the first books i bought to do with astrology - and i really made a good choice. Rather than being full of what the fire signs are, what the water signs are etc - Arryo takes it that the reader already knows the basic principles of a chart and how to read it and so you read feeling that this is a man that knows what hes talking about, to an educated audience. A refreshing outlook into the natal chart, and certainly one that i would highly recommend for a beginner that just wants to take reading a chart that one step further!
Arryo's humour and insight are combined well to produce a well written and informative book on reading the natal (and so nearly any) chart!
Read more
59 people found this helpful
Report abuse

Jo.Q
5.0 out of 5 stars Love it.
Reviewed in the United Kingdom on 3 February 2015
Verified Purchase
A very comprehensive guide of astrology. Love it.
Read more
One person found this helpful
Report abuse

jules
4.0 out of 5 stars chart interpretation Handbook
Reviewed in the United Kingdom on 14 December 2012
Verified Purchase
very ineresting read, like the layout of the book. i am study at the moment and will recommend to other students on my course
Read more
2 people found this helpful
Report abuse
See all reviews
Back to top
Get to Know Us
Connect with Us
Make Money with Us
Let Us Help You
EnglishChoose a language for shopping.
© 1996-2021, Amazon.com, Inc. or its affiliates