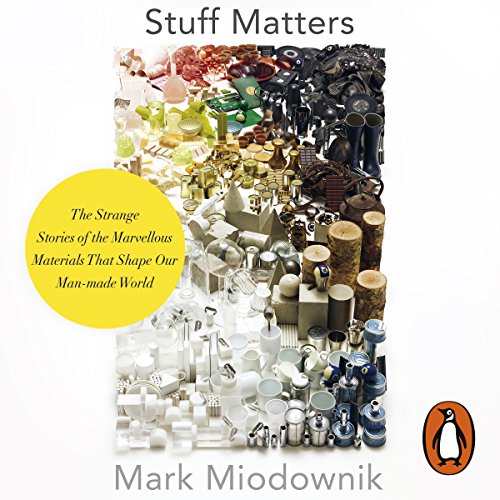 A unique and inspiring exploration of human creativity from one of the UK's best known scientists.

Everything is made of something....

From the everyday objects in our homes to the most extraordinary new materials that will shape our future, Stuff Matters reveals the inner workings of the man-made world and the miracles of craft, design, engineering and ingenuity that surround us every day.

From the teacup to the jet engine, the silicon chip to the paper clip, from the ancient technologies of fabrics and ceramic to today's self-healing metals and bionic implants, this is a book to inspire amazement and delight at mankind's creativity.

Mark Miodownik is Professor of Materials and Society at UCL, scientist-in-residence on Dara O Briain's Science Club (BBC2) and presenter of several documentaries, including The Genius of Invention (BBC2). In 2010, he gave the Royal Institution Christmas Lectures, broadcast on BBC4. He is Director of the UCL Institute of Making, which is home to a materials library containing some of the most wondrous matter on earth, and has collaborated to make interactive events with many museums, such as Tate Modern, the Hayward Gallery and Wellcome Collection. In 2014, Stuff Matters won the Royal Society Winton Prize.

Nithilane
5.0 out of 5 stars Things around me are never the same to me anymore
Reviewed in India on 2 August 2020
Verified Purchase
My thought process has been changed.
I'm never going to see the world of materials in the same way.
It's like someone put me a coloured spectacles, through which I'm seeing the materials differently now.
It's another dimension.

The material science subject is explained to a common man in a most realistic way in the simplest of plain English words, using emotions and feelings... Thanks to Mark Miodownik
Read more
3 people found this helpful
Helpful
Report abuse

Satyam
5.0 out of 5 stars Fascinating stories on materials
Reviewed in India on 12 November 2015
Verified Purchase
I heard about this book after it won the Royal Society Winton Prize and immediately bought it because of my interest in materials. The book basically covers a wide range of materials that we practically use in our daily lives, including new materials that will shape our future. The author starts off with a horrific incident in his youth that inspired him to study materials and follows the rest of the book describing each material vividly. He narrates several experiences in his life, each one connecting to a particular material. He meets many individuals who are experts in materials technology and interviews them to get more in-depth knowledge. He scientifically defines atoms and molecules and their arrangement in matter that give rise to shape and hardness of materials. This book is written in such simple language that even someone who is not a technical expert can understand the contents.
Read more
9 people found this helpful
Helpful
Report abuse

Paatni
5.0 out of 5 stars Recommended!
Reviewed in India on 3 July 2016
Verified Purchase
Bought it for my 12 yr old based on reviews on Amazon. He loved it and has declared it is part of his ' re- read pile'. I browsed through it and agree that it is fascinating.
Read more
3 people found this helpful
Helpful
Report abuse

Manan Mishra
5.0 out of 5 stars Welcome to the work of material science
Reviewed in India on 25 January 2020
Verified Purchase
Loved it. A very unusual book. The author takes you on a fascinating journey of what all of the stuff around us is made of, its history, evolution and future. Chocolate, plastics, steel, foam, cement. Makes you look at things very differently.
Read more
Helpful
Report abuse

Amazon Customer
4.0 out of 5 stars Good
Reviewed in India on 22 May 2017
Verified Purchase
The author succintly puts across intersting things about those mundane things in our life, which we normally take for granted ! Good read
Read more
One person found this helpful
Helpful
Report abuse

Unaise
4.0 out of 5 stars A good read
Reviewed in India on 13 July 2017
Verified Purchase
A good read and different view on everyday things which we take for granted
Read more
One person found this helpful
Helpful
Report abuse

Kunal
5.0 out of 5 stars Excellent read, highly recommended
Reviewed in India on 4 February 2017
Verified Purchase
Excellent read, popular science (mainly chemistry) at its best. For everyone, you don't need to be a science lover to enjoy and learn from it.
Read more
Helpful
Report abuse
See all reviews

Mark Chisholm
4.0 out of 5 stars Excellent General Intro Into Materials
Reviewed in the United Kingdom on 4 September 2018
Verified Purchase
I watched the accompanying series when it came out a few years ago and I found the programs engaging and highly interesting. Then I spotted this book and figured I'd get a more in depth look as its a book and not constrained by the time allowed for a TV program.

But, you don't. If you've seen the program then you've pretty much read the book.

This is not to say the book is bad at all because its not. Its well written, covers a lot of ground and the subjects covered could be dry and boring but they are not due to the enthusiasm of the author.

The other thing I note - which of course is self evident if you are reading a book about technology - is that already some stuff is out of date or nearly so. Particularly - and rather prophetically - the author takes us through some of the science of replacement body parts in particular joint replacements. He points out that the new all titanium joints may well last as long as the human they are fitted to and therefore a real bonus over the joints with polypropylene surfaces - but that no-one is sure what the effects of titanium against titanium with particle wear occurring. Well, recently its become clear that these all titanium joints have caused some serious medical issues with the wear causing metals entering the body.

So, I'd recommend this book if you have not seen the series. But, I'm writing this in 2018 - six years after it was written and already its beginning to show its age.
Read more
15 people found this helpful
Report abuse

Chris
5.0 out of 5 stars An inspiring and accessible read on what makes our world!
Reviewed in the United Kingdom on 12 January 2017
Verified Purchase
Whether you are a materials aficionado, or have no previous knowledge of materials science and are just interested in what all our 'stuff' is actually manufactured from, this excellent book deserves a place on your shelf.

Miodownik is an accomplished materials engineer, but moreover he is a man whose passion for his craft is clearly evident in his writing - there are fewer things more satisfying to read than this.

This book offers a fascinating insight into some of the materials of our modern world for everyone. There are no headache inducing formulae here, just scientific principles and some well thought out analogies. It's not just a long tribute to steel or aluminium, either (although that magnificent material steel does get its deserved chapter). You'll learn just why chocolate is so amazing to eat, and how scientists used exotic gels to capture space dust.

My engineering background didn't stop me finding this book hugely enjoyable. What it covered that I already knew, I was happy to learn again from Miodownik - his writing style is elegant, succinct and makes this book a page turner.

Recommend to all who want to know more about what makes up our man-made world. You won't look at your kitchen in the same way again. For me, it is second to J.E Gordon's books, but only just. First class writing.
Read more
8 people found this helpful
Report abuse

jleekjnr
5.0 out of 5 stars A fantastic read!
Reviewed in the United Kingdom on 29 July 2019
Verified Purchase
This book is brilliant, it uses language that should be accessible to all, and explains what can be pretty complex topics in a way that make it both interesting and engaging.
Even if you have just a passing interest in what stuff is made of and what makes up the stuff that makes up the stuff, you'll enjoy this.
And if you're not interested in what makes up all the stuff, you should read it too, cos then you will be..
Read more
3 people found this helpful
Report abuse

Mrs. Doreen Watkinson
5.0 out of 5 stars the wonder of stuff
Reviewed in the United Kingdom on 26 February 2015
Verified Purchase
I heard The author do a podcast and was fascinated. So wanted to read his book and continued to be intrigued and fascinated about the stuff we take for granted. It is a challenging read. We bought our 11 year old grandson a microscope for his birthday. I decided to buy this book for him and his 12 year old brother I was so impressed with it. It did say that there would be words in it which they might not know so to have a dictionary close by when reading it. After all I also needed a dictionary at times. But it is not a bad fault to enlarge our vocabulary and broaden our minds challenging the reader to look at everything about them in a new way. The author's use of story telling and illustrations enhanced the reading experience. I enjoyed the book very much and am not an academic or a scientist it is a book for anyone with an enquiring mind.
Read more
8 people found this helpful
Report abuse

Paul Gibson
5.0 out of 5 stars What a great read.
Reviewed in the United Kingdom on 12 August 2019
Verified Purchase
I loved this book straight from the first couple of pages, Marks enthusiasm captivated me right from the off. Materials that surround us are undoubtedly by most, taken for granted, the author encourages the reader to look a little deeper and discover an new and exciting perspective, I would recommend this book to anyone remotely interested in the world that surrounds them, very much looking forward to reading his next book on liquids.
Read more
One person found this helpful
Report abuse
See all reviews
Back to top
Get to Know Us
Connect with Us
Make Money with Us
Let Us Help You
EnglishChoose a language for shopping.
© 1996-2021, Amazon.com, Inc. or its affiliates