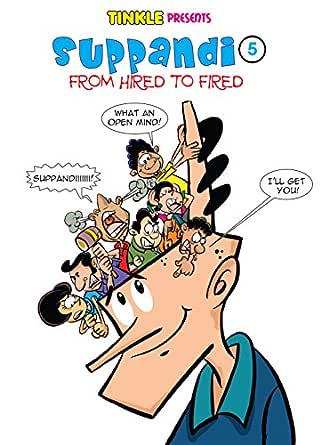 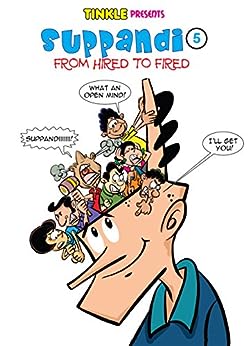 Everyone’s favourite goofball Suppandi is back! This time round, he’ll take up any job from wildlife photography to primary school teaching. But one thing’s for certain—where there’s Suppandi, there’s bound to be chaos!
• Suppandibecomes an auto rickshaw driver with ridiculous results on the road inRoad Rules.
• Suppandi has some funny ideas about doctorswhen his best friend Maddy falls ill in Doctor.
• Suppanditurns quality checker as he is tasked with checking the quality of everything he lays his hands on. What happens next? Utter madness! Check outBurnout.

Suppandi is the most popular of Tinkle Toons. He has been creating trouble and evoking laughter since January 1983, issue Tinkle 27. He’s a total goof and will make you laugh with his silly antics. Suppandi has had multiple jobs however none of them have lasted very long. He takes instructions from his employers, applies his own literal logic to them and causes total mayhem. The character of Suppandi is based on a Tamil folklore character, Chappandi. Ram Waeerkar, the legendary Tinkle artist gave form to Suppandi. Currently, his daughter, Archana Amberkar, illustrates the strip.

Continuously published since 1980, Tinkle is one of the oldest and most cherished children’s comics magazines in India. It boasts of a large fan following and beloved characters that include such household names as Suppandi, Shikari Shambu and Tantri the Mantri.

atchyutamba
5.0 out of 5 stars marvellos
25 July 2015
Format: PaperbackVerified Purchase
Suppandi is the best book for reading and killing time with hours of laughter which is good for us. This book is also a perfect gift.
Read more
4 people found this helpful
Helpful
Comment Report abuse

darshana
5.0 out of 5 stars Hilarious 😂
8 June 2019
Format: Kindle EditionVerified Purchase
The whole suppandi series is funny, hilarious, fun and lively. The comic keeps you entertained throughout. I am lovi'n it.
Read more
Helpful
Comment Report abuse

Anil Jain
1.0 out of 5 stars The mystery of missing books
19 June 2019
Format: PaperbackVerified Purchase
I didn't want to give any star, because I didn't get the book at all. Instead of 4 books ordered by me, the parcel contain only 2
Read more
Helpful
Comment Report abuse
There are 42 customer reviews and 53 customer ratings.
See all 42 customer reviews
Write a product review
click to open popover
Unlimited FREE fast delivery, video streaming & more
Prime members enjoy unlimited free, fast delivery on eligible items, video streaming, ad-free music, exclusive access to deals & more.
> Get started
Back to top
Get to Know Us
Connect with Us
Make Money with Us
Let Us Help You
EnglishChoose a language for shopping.
© 1996-2020, Amazon.com, Inc. or its affiliates