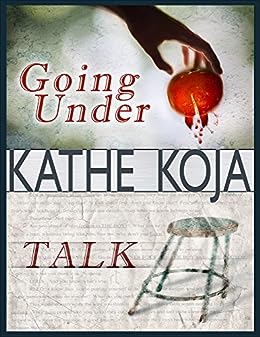 Kit Webster is hiding a secret. Carma, his best friend, has already figured it out, and pushes him to audition for the high school play, Talk. When he's cast as the male lead, he expects to escape his own life for a while and become a different person. What he gets instead is the role of a lifetime: Kit Webster. In the play, Kit's thrown together with Lindsay Walsh, the female lead and the school's teen queen. Lindsay, tired of the shallow and selfish boys from her usual circle of friends, sees something real in Kit - and wants it. But Kit's attention is focused on Pablo, another boy in school. The play is controversial; the parents put pressure on the school to shut it down. And when Kit and Lindsay rally to save Talk, they find themselves deep into a battle for the truth: onstage, and inside themselves.

“The novel...flows in a poetic stream-of-consciousness style. Kit's own questions of identity and truth lead to a dramatic conclusion--both on- and offstage--as he finally discovers who he is.” ― The Horn Book Magazine, Starred Review

“What Koja, who deftly handles several points of view...does so well is to let the reader clearly see her characters' imperfections, while never losing sight of their essential humanity.” ― Kirkus Reviews

Hilly and her brother, Ivan, have been homeschooled by their parents. All their lives it has been just the two of them – Ivan and Hilly, brother and sister, pilot and copilot. Until Hilly breaks out of their cozy cocoon to work on the local high school literary magazine as an extracurricular activity. Ivan feels betrayed: it's no longer just the two of them. And when Hilly goes into a depression after the suicide of a friend she has made at the magazine, she drifts even further away from Ivan. Hilly's parents insist that she see a psychotherapist. Ivan steps in to help manage Hilly's recovery by taking her to and from her appointments but compounds the betrayal by establishing his own relationship with the manipulative therapist.

Through the alternating voices of Hilly and Ivan, and drawing on the myths of Persephone and Narcissus, Kathe Koja explores the souls of two teenagers caught in a world where love takes you deeper than you ever dreamed you'd go.

"Koja has once again created a rich psychological drama whose characters will not be easily forgotten." ― The Horn Book

"This harrowing, intense tale has a vividly drawn cast." ― Booklist

"Well executed in its setup, in its foreboding aura, and in the feel of each person's voice." ― School Library Journal

There are 0 customer reviews and 1 customer rating.
Back to top
Get to Know Us
Connect with Us
Make Money with Us
Let Us Help You
EnglishChoose a language for shopping.
© 1996-2022, Amazon.com, Inc. or its affiliates