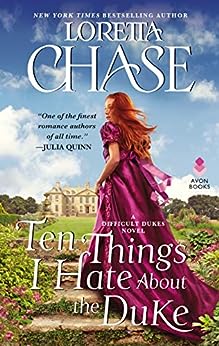 Ten Things I Hate About the Duke: A Difficult Dukes Novel Kindle Edition

Loretta Chase has worked in academe, retail, and the visual arts, as well as on the streets—as a meter maid—and in video, as a scriptwriter. She might have developed an excitingly checkered career had her spouse not nagged her into writing fiction. Her bestselling historical romances, set in the Regency and Romantic eras of the early nineteenth century, have won a number of awards, including the Romance Writers of America’s RITA®. For more about her past, her books, and what she does and doesn’t do on social media, please visit her at LorettaChase.com.

“Chase’s consistent gift is to gently puncture all the genre’s conventions but one: the one that makes you care about her Regency hero and heroine and their happy ever after.” (Praise forA Duke in Shining Armor)   (New York Times Book Review)

“Chase is a grande dame of historical romance, and her latest displays the clever plotting and brilliant dialogue for which she’s known... [she] brings a fun blend of quirkiness and wit to a sexy love story that’s both charmingly romantic and laugh-out-loud funny.” (Praise forA Duke in Shining Armor)   (Kirkus Reviews) --This text refers to the mass_market edition.

4.4 out of 5 stars
4.4 out of 5
1,115 global ratings
How are ratings calculated?
To calculate the overall star rating and percentage breakdown by star, we don’t use a simple average. Instead, our system considers things like how recent a review is and if the reviewer bought the item on Amazon. It also analyses reviews to verify trustworthiness.
Top reviews

I admit to having doubts that Ms. Chase could make Ashmont not only likeable, but also deserving of the heroine’s love. I’m pleased to say that my reservations proved groundless, because she does a splendid job. In A Duke in Shining Armor, Ashmont displayed none of the qualities of a true romantic hero. He may be handsome, rich and possessed of natural charm, but these attributes are far outweighed by his flaws. He’s an immature, irresponsible, reckless libertine who is forever causing mayhem with his silly pranks. If that wasn’t enough, he let his would-be bride slip through his fingers and nearly killed his best friend in a duel.

Cassandra is intelligent, strong-willed, impulsive and confident – a woman who fully embraces her individuality. As a member of the Andromeda Club, a ladies’ charity, she is fully aware of the poverty that exists and the injustices inflicted on those less fortunate than herself. I like how she doesn’t just play lip service to her charity work but is actively involved in it. She has strong political views and is not afraid to voice them in public, much to her father’s vexation. Hoping that a husband might curb Cassandra’s behaviour, he stipulates that her younger sister, Hyacinth, cannot marry until Cassandra herself weds. Despite everything, she clearly loves her family very much, but cannot deny her true self. Her father isn’t tyrannical but simply someone who loves his family and fears that his daughter’s behaviour will reflect badly on the whole family.

Ashmont is the last person Cassandra would ever consider marrying. As a young girl, she had fallen hopelessly in love with him and imagined that he would grow up to be somebody fine and noble, only to have her dreams crumble to dust. However, a carriage accident and scandal will change the course of both their lives.

Ashmont is totally captivated by Cassandra; he admires all the attributes other men find unattractive - her plain speaking, her intelligence, her confidence, and her impulsiveness. He’s knows that his looks and charm won’t carry any sway with Cassandra and he must gain her trust and respect. He knows it will be a Herculean task but he’s determined to do it. I enjoyed watching Ashmont gradually becoming the man Cassandra hoped he would be. He stops drinking and takes time to find out what’s important to Cassandra, and in doing so, comes to appreciate the constraints placed on women by society, and the plight of the poor, things he had previously been oblivious to. He comes to realise just how pointless his life has been until now.

Given her past disappointment, Cassandra finds it hard to trust or respect Ashmont because she’s certain he will break her heart all over again. But time and again, she is surprised by his actions, such as the obvious thought and care he’d taken in choosing the gift for Keeffe, or diffusing the situation with the rent collector, using restraint rather than his customary fists.

The chemistry between these two is positively delicious and their witty banter an absolute delight. Of course, the path to true love never runs smoothly and obstacles come in the form of Ashmont’s rival, Mr. Titus Owsley, (or as Ashmont refers to him, ‘Mr. Tight-Arse Oh-So-Holy’), and the vindictive Lady Bartham who sets out to destroy their new found happiness. Unlike so many other heroines, Cassandra is sensible enough to tell her parents the truth of the situation, and I love the scene where her mother, Lady deGriffe, thwarts Lady Bartham’s insidious scheming.

The story is rich in Ms. Chase’s trademark wit and humour and these are just a few of my favourites moments - the ‘umbrella fight’ which conjured up the most wonderful images in my mind, the letters between them after Keeffe’s accident, and Cassandra’s letter to Ashmont detailing ten events that had happened since he ‘staggered’ into her life. I also like how Ms. Chase always brings an element of social commentary to her books,

The secondary characters all add depth to the story and I particularly liked Keeffe, Cassandra’s groom, who is more than just a servant, and Sommers, Ashmont’s valet, who is prone to weeping at the state of master’s attire. I am looking forward to reading Alice & Blackwood’s story in the final book in the series, and also hoping that the obvious history between Ripley’s Aunt Julia and Ashmont’s Uncle Frederick will finally be revealed.

By teaandbiscuits
5.0 out of 5 stars So much fun to read!
Reviewed in the United Kingdom on 16 December 2020
Verified Purchase
I have to say I was quite put off by the cover. It doesn't represent well the feisty heroine and the hero who she gets one over many times. However, Loretta Chase was a recommended author of Sarah MacLean an author who I love. I've read nearly all of Chase's stories but this is a humdinger. Fantastic banter, a heroine who isn't at all a wallflower and a hero who frankly needs a kick up the back side. So much fun to read. Tension all the way through with some steaminess, although there could have been more of this. Highly enjoyable.
Read more
One person found this helpful
Report abuse

mags
3.0 out of 5 stars Bit slow and boring
Reviewed in the United Kingdom on 28 January 2021
Verified Purchase
Slightly boring and hard to finish. Characters had unlikely expectations for the times. Heroine also was unlikeable and not a person you would want to spend any time with, even in a book. Wholly self absorbed.
Read more
3 people found this helpful
Report abuse

Frances Bard
4.0 out of 5 stars Enjoyable
Reviewed in the United Kingdom on 6 January 2021
Verified Purchase
I found the opening chapters a bit slow going and slightly confusing as it was so long ago I read the first in the series. Ashmont was pretty grim in the first book and seemed irredeemable . Although he's a fickle,childish drunken lout he comes up to scratch pretty quickly in this book when he realises what a gem Ms Pomfret is .
I enjoyed it but not my favourite of her books.
Read more
Report abuse

By MR
3.0 out of 5 stars By MR
Reviewed in the United Kingdom on 2 September 2021
Verified Purchase
Much too long in my opinion... the first half was good then it went on and on just got bored with it started to skip pages not something I like to do ...not her best work should h ave condensed it to half
Read more
Report abuse
See all reviews