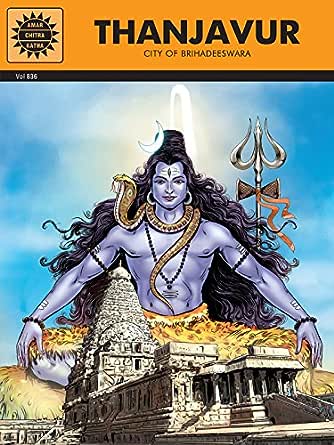 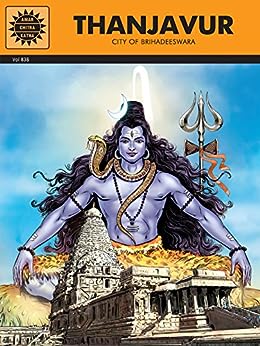 Legend has it that the ancient town of Thanjavur came up on the spot where Vishnu defeated an evil demon. The mighty Cholas made it their capital in the 9th century CE, following which they increased, through conquests, the size and strength of their empire. Finally, after realizing all his military ambitions, the Chola monarch Raja Raja Chola I decided to build a great temple in Thanjavur dedicated to Lord Shiva. Thus Thanjavur became home to the majestic Brihadeeswara temple and many other shrines. Amar Chitra Katha tells the stories surrounding this ancient town and its monuments.

Senthil Kumar Srinivasan
2.0 out of 5 stars Could be better edited
7 May 2017
Format: Kindle EditionVerified Purchase
Interesting historically but the hodge-pudge collection of stories seems disjointed and jumps from one topic to another instead of focussing on the city. Can have more detail on the city's history during the time of the Mughals, Marathas and colonial period and also touch upon more recent key historical figures.
Read more
3 people found this helpful
Helpful
Comment Report abuse

Meipporul
3.0 out of 5 stars Attempt is good, but incoherent mixture of folk tales, puranas and history
30 April 2017
Format: PaperbackVerified Purchase
Mostly fiction based on folk lore and puranas. I was expecting the history of this ancient city in a easy to understand story format for kids. The way it is told is neither coherent nor lucid for kids to understand. It mixes puranas, folk lore and history in an incoherent. Nevertheless good attempt.
Read more
One person found this helpful
Helpful
Comment Report abuse

Vikas Bishnoi
5.0 out of 5 stars I enjoyed reading this book
25 September 2018
Format: PaperbackVerified Purchase
I really loved the story in it and came to know about the historic city Thanjavur and it’s temple built by Rajaraja Chola
Read more
Helpful
Comment Report abuse

DSM
5.0 out of 5 stars Good
29 April 2017
Format: Kindle EditionVerified Purchase
Very Informative and interesting. A good source of knowledge for kids to understand the importance of the temple. Worth reading
Read more
Helpful
Comment Report abuse

Shivam
5.0 out of 5 stars Great history of Thanjavur and god's play to chola The king
30 March 2017
Format: PaperbackVerified Purchase
Awesome thanjavur whenever the name of brahadeeswarar hears it's make me and all goosebumps nice book go for it without second thought topics jump little problem but very good illustration
Read more
Helpful
Comment Report abuse

Go to Amazon.com to see all 4 reviews 3.7 out of 5 stars
click to open popover
Unlimited FREE fast delivery, video streaming & more
Prime members enjoy unlimited free, fast delivery on eligible items, video streaming, ad-free music, exclusive access to deals & more.
> Get started
Back to top
Get to Know Us
Connect with Us
Make Money with Us
Let Us Help You
EnglishChoose a language for shopping.
© 1996-2020, Amazon.com, Inc. or its affiliates