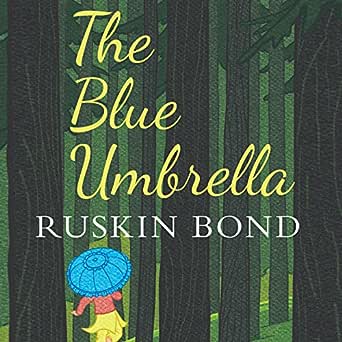 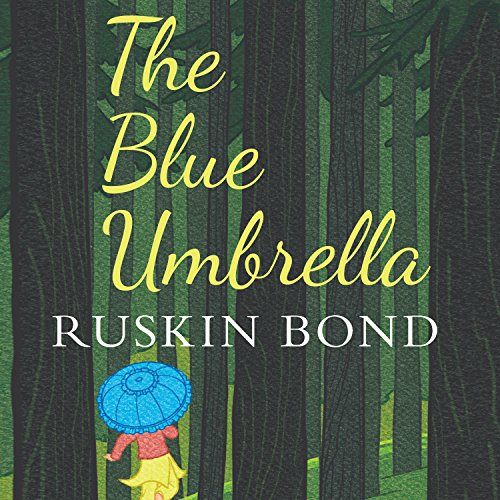 4.5 out of 5 stars
4.5 out of 5
2,225 global ratings
How are ratings calculated?
To calculate the overall star rating and percentage breakdown by star, we don’t use a simple average. Instead, our system considers things like how recent a review is and if the reviewer bought the item on Amazon. It also analyses reviews to verify trustworthiness.

Damini🌸
4.0 out of 5 stars Four stars! 🌟
Reviewed in India on 1 October 2018
Verified Purchase
The Blue Umbrella is a novella by Ruskin Bond, wherein he weaves a beautiful story of an ordinary village girl Binya and her love for the blue umbrella. Binya traded this beautiful blue umbrella for her only possession, a leopard claw necklace. So, this story is basically about the struggles of Binya to keep the umbrella safe from everyone and how she ended up giving it to someone out of a sudden realisation.

This story conveys multiple emotions, like the happiness for small things, materialistic joys, kindness and jealousy over the beautiful umbrella and it's ends with a beautiful message, that there is more joy in giving, then owning something.❤️

Chittajit Mitra
4.0 out of 5 stars A must have.
Reviewed in India on 1 February 2018
Verified Purchase
The Blue Umbrella is a short fiction written by Ruskin Bond & published by Rupa Publications. The author’s first novel, The Room on the Roof, written when he was 17, won the John Llewellyn Rhys Memorial Prize in 1957. Since then he has written several novellas, essays, poems & children’s books. He has also written over 500 short stories & articles that have appeared in a number of magazines & anthologies. He received the Sahitya Akademi Award in 1993 for Our Trees Still Grow in Dehra, a collection of short stories & the Padma Shri in 1999.

Our protagonist of the story is Binyadevi or Binya as she is called by everyone from her village. She lives a simple life with her mother & elder brother Vijay or Bijju. One fine day she acquires a beautiful bright blue umbrella from some picnickers who came at the hills of Garhwal in exchange of her lucky leopard’s claw necklace. The story beautifully revolves around how she gets attached to the umbrella while a shopkeeper named Ram Bharosa eyed on it & plans to acquire it somehow.
Ruskin Bond is one of my favorite author of all time. His simplicity in writing the stories just sweep me away. I’m so glad I picked up this small book which refreshed my mind totally. The characters have been etched as ordinary as one can get & that’s what makes Bond’s writing mesmerizing. The language, cover & title, everything is on point.

Khyati Gautam
5.0 out of 5 stars A very beautiful novella.
Reviewed in India on 13 June 2019
Verified Purchase
A pretty little umbrella which is blue in color brings unbound happiness in Binya’s life. She carries it everywhere with so much love and affection. There is this old shopkeeper Ram Bharosa who is eyeing this prized possession of the young girl of Garhwal. He tries to have his way and get the umbrella under his paws. Would he be successful?

A simple and short story of kindness and humanity is The Blue Umbrella. In this classic novella, Ruskin paints a vivid image of Garhwal where the story is set. Binya exchanges her leopard’s claw pendant for the blue silk umbrella. And when she comes across the frenzied and despairing state of Ram Bharosa, she does the unimaginable. As she says that an umbrella is not everything. This displays her sensibility and humility. This act of hers opens the heart of the old shopkeeper and positivity flows in. In short, there is a mix of heroism and redemption in this sweet story which is an ideal read for kids but could be equally enjoyed by the adults.

Ijaz Ahmed
5.0 out of 5 stars Just awesome.
Reviewed in India on 21 April 2019
Verified Purchase
I am new to English language books. So, just want to try out some random books to start my journey in English literature. Found it randomly in Amazon with such a less price. At first I was little shocked to see how tiny and short book it is. But as I start reading it, oh my my...such a beautiful story of a hillside girl. There is nothing extraordinary but it's all about those minute details that the writer protraied with so much affection and in such delightful way. For all those story lovers and who want to start their English literature journey this is a must book written in so simple language that you don't need to look up to dictionary everytime.
Read more

Rituraj Shukla
5.0 out of 5 stars A ravishing story, which IMO, should be in school books
Reviewed in India on 18 January 2020
Verified Purchase
This novella is about a mountain girl, Binya, from Garhwal who lives with her mother and brother, Bijju and her cows, Neelu & Gori.

The story narrates the characters around her life and how she fell in love with a blue umbrella and gives away her lucky charm for it and yet gives away the umbrella only to see Ram Bharosa happy.

Binya's story beautifully portrays how life is much more than attachment to materials and that "What goes around comes around" in a positive way.

Amazon Customer
5.0 out of 5 stars A must read !
Reviewed in India on 30 August 2017
Verified Purchase
If I have to sum this book in one word then it would be 'beautiful'. Only Ruskin Bond can pen down such a touching story in few pages.

Binya is an ordinary girl from hills who have not seen any luxury in her life. One day, she meets picnickers and saw an alluring bright blue umbrella. Her love for the umbrella was instant and after the demand of picnickers, she exchanges her lucky charm over the blue umbrella.

This blue umbrella becomes the talk of the town. Some envied her, some feel happy for her. Overall, this umbrella brings various adventure in the life of Binya.

This book has a very good ending, which I have not expected and at this point, this book becomes a mature reading.

I am really touched by this book, I am so glad that I read this book. I am still lingering with the thoughts of this book.

This book can be finished in 20 minutes so if you have read this book yet then you should definitely pick it up.
Read more
7 people found this helpful
Helpful
Comment Report abuse

Sandeep Ravula
5.0 out of 5 stars It is interesting and inspiring 👍
Reviewed in India on 4 June 2019
Verified Purchase
It's very inspiring story. The way Ruskin Bond has narrated the story is incredible. He takes me a tour to himalayas through his narration. From this book i have understood that Life is not about getting something from anyone it is about giving to others to make them to feel happy 😊.
Read more

I totally recommend the book but see if you can lay your hands on a Kindle edition that has been made by anyone other than Ninestars Information Technologies Ltd. because these guys suck big time or better still buy the paperback version.
Read more
4 people found this helpful
Report abuse

prathibhas
5.0 out of 5 stars Wonderful read
Reviewed in the United States on 7 October 2017
Verified Purchase
Love the way Ruskin bond portrays the life of the village girl around the blue umbrella. The narrative carried us to the valleys of himalayas.Thanks for the wonderful story
Read more
Report abuse

Phanindra Kondagari
5.0 out of 5 stars Awesome read
Reviewed in the United States on 19 January 2017
Verified Purchase
Simple and Beautiful story! Ruskin Bond has always impressed me. This is another great book! Love every thing about this book!
Read more
Report abuse

Amazon Customer
3.0 out of 5 stars Three Stars
Reviewed in the United States on 18 January 2016
Verified Purchase
A small story of Half an hour read.
Read more
Report abuse
See all reviews
Unlimited FREE fast delivery, video streaming & more
Prime members enjoy unlimited free, fast delivery on eligible items, video streaming, ad-free music, exclusive access to deals & more.
> Get started
Back to top
Get to Know Us
Connect with Us
Make Money with Us
Let Us Help You
EnglishChoose a language for shopping.
© 1996-2020, Amazon.com, Inc. or its affiliates