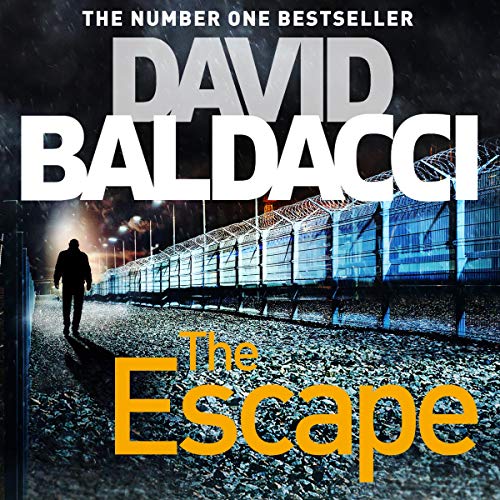 By completing your purchase you agree to Audible’s Conditions Of Use Amazon's Privacy Notice.
Sold and delivered by Audible, an Amazon company
Share
One person found this helpful
Helpful
Report abuse

MJ
4.0 out of 5 stars >>>>>THE ESCAPE REVIEW<<<<<
Reviewed in India on 6 January 2017
Verified Purchase
Author David Baldacci returns with a thrilling action packed and suspenseful story with military investigator John Puller. The story is set in the united
states but mainly Kansas and Washington DC. For John Puller, this case has deep implications, he has to choose between family and duty and as the complexity of the situation deepens and evidence that his brother was framed comes out, John Puller is stuck in a dilemma. The escaped convict who John has to catch is none other than his brother Robert Puller. Robert Puller changes his appearance and covers his tracks but will it be enough to evade capture by the USA or the third party that had framed him. As the story unravels, not everyone is not who they seem to be
Read more
One person found this helpful
Helpful
Report abuse

Mayur
4.0 out of 5 stars The story of Puller brothers, coming together and working on same case!
Reviewed in India on 10 July 2015
Verified Purchase
'The Escape' is the story of Robert Puller's escape from Military prison, who is elder brother of John Puller. There are lots of twists and turns in the story. First time Puller is getting involved in the world of spies, which is not his turf.
Rating this novel as 4 star based on the previous standards of David Baldacci. I think this is a good book and worth its while to read through it, but found the original Baldacci missing. The end of the story is not a shocker. When you finish around 90% the secret is more or less clear. Also the book leaves some of the mysteries unresolved, like, who and why John Puller is put on the case of finding his brother although it is against military ethics.
All in all, a good book to read through. It will surely keep you intrigued and interested till the end.
Read more
Helpful
Report abuse

Absar
3.0 out of 5 stars Won't recommend
Reviewed in India on 3 March 2020
Verified Purchase
Disappointed.... Too many loopholes, weak characters, especially the antagonist.
John Puller is a clone of Jack Teacher, desperate to make its own mark.
Read more
Helpful
Report abuse

Prema
5.0 out of 5 stars It`s A David Baldacci !! Great Reading As Always
Reviewed in India on 10 May 2021
Verified Purchase
Loved the Pace,The details...Above all the way Puller`s Charecter is etched..Unputdownable
Read more
Helpful
Report abuse

Harshad
4.0 out of 5 stars Fast n furious
Reviewed in India on 21 April 2015
Verified Purchase
My first DB novel was a great experience. It's fast and exciting with a good story in most parts. Lost a little steam just before the end as if the author ran out of breath but a good comeback at the end makes it up. Good book for all thriller aficionados..
Read more
Helpful
Report abuse

S Vasudev
5.0 out of 5 stars Good thriller
Reviewed in India on 9 October 2018
Verified Purchase
Good fast paced thriller till the end with twists and turns from David Baldacci. I hope to ready many more of his novels.
Read more
Helpful
Report abuse
See all reviews

Graham M. Jones
1.0 out of 5 stars Predictable
Reviewed in the United Kingdom on 10 October 2017
Verified Purchase
Baldacci has equivalent franchises to other authors and his hero John Puller seems to be almost the same as Jack Reacher, a military super cop, hero.

That said, I have enjoyed the previous John Puller books, but the same can't be said of this one, which I found predictable, and shallow and at 460 plus pages, at least 200 pages too long. I found it hard to care about the heroes, male and female, the villains are almost mustachio twirling but cliched, the action is poorly realised and the plot twists can be seen coming a mile off.

In the best chick flick tradition, the father with dementia comes back from his vagueness, if he ever had it, and we are set up for the next book, a quest for a missing mother.

I had difficulty from the start, but persevered, only because unfinished books annoy me intensely.

So I can't recommend this one at all, it's been done elsewhere and so much better.
Read more
3 people found this helpful
Report abuse

Steve
3.0 out of 5 stars Not Baldacci's best!
Reviewed in the United Kingdom on 11 January 2015
Verified Purchase
The third in the John Puller series....Baldacci's version of Jack Reacher. As good a writer as he is, he just doesn't pull it off like Lee Child can.
I really enjoyed the first book, the second was above average, but this one falls just short of the mark, and is average at best. I gave it 3 stars out of courtesy for Baldacci's, one of my favourite authors, if it had been anyone else it would have received 2 stars.
It is well written, as you would expect from such an accomplished author, but it was all just a bit too much Hollywood!
The overriding plot was one we have seen before many times, traitors in the ranks, who to trust etc. throw in the chemical bomb that they have only a few hours to find....even cutting the wire with seconds to spare( I don't think I've spoiled anything there..am sure you would have guessed that...as seen in a thousand movies!).
The dialogue was a bit wooden, and corny. The characters a little one dimensional. And John Puller is turning too much into Captain America.
ironically what starts out as the story, Pullers brother escaping from prison, had a more unique and interesting road to follow than the corny been done before spy/traitor/save the world from bomb with minutes to spare story!
Come on Mr Baldacci's, you can do better than this! Give Puller some decent dialogue, a few flaws other than his inability to show emotion, and stay away from the Hollywood cliches in the story line.
Read more
9 people found this helpful
Report abuse

Anne
5.0 out of 5 stars A truly enjoyable read
Reviewed in the United Kingdom on 20 February 2015
Verified Purchase
John Puller is a military policeman. He is a loner and dedicated to his job and to his country. This is the third book in this series and I enjoyed it immensely.

Puller's brother was also a high flyer in the army but he has been in prison for a reason which was not disclosed in previous novels. In this book he escapes from prison and, although he has been ordered not to, Puller starts to investigate his escape and eventually his original crime. Puller is authorised to investigate despite everyone's better judgement and is joined by agent Veronica Knox. Obviously, things are not as straightforward as you would expect and it turns out (not a spoiler as you will have worked this out for yourself from the very beginning) that not only is Puller's brother innocent but he may also be in danger himself.

This is a great story which pulls you along in the action. Puller is an engaging character as he is honest and intelligent (although to the British reader he is a little over-patriotic). One of the author's themes is the size and complexity of the military and the intelligence services in the USA and over and over again the investigation is stalled or obstructed in some way by another agency or a corrupt official. Puller cannot be sure who he can trust and he also cannot be sure who will halt his career or betray him.

This isn't great literature, and I don't think that it is intended to be that. It is, however, a really readable and enjoyable story with lots of action, twists and turns, and jeopardy for our main characters. It reminds me of Dan Brown at his best but the conspiracies here are much more believable. I hope that we see more of John Puller
Read more
4 people found this helpful
Report abuse

A. F. Prestwich
4.0 out of 5 stars Back on track.....
Reviewed in the United Kingdom on 25 March 2015
Verified Purchase
I found it interesting reading the variable reviews by others where their small observations being the same as mine. However,I would have liked to have rated it 4.5 as it just failed for me at the end otherwise a 5.0. The first Pullar albeit something of a Jack Reacher copy was an OK start, the next I felt lost its way, similar to Baldacci's Robie books, but this one I thought was pretty good. I do not mind being educated by a book so the explanations of the US military set-up was an interesting part of the story and I felt Baldacci was at his best for three quarters of the book. I do not know whether it was time constraints or a limitation on pages but the ending just spoilt the story. Spoilt it insomuch as it was hurried and to slow it down with more detail for 50 pages or more would have been an excellent finish. It is a weakness of many crime and/or thriller writers that they put a great deal of effort into the main body of the story and appear to either get bored or rush the finish. The other irritant which appears in this book also is the ice cold killer throughout 'suddenly' wants to have a 'chat' with our hero rather than just kill him; that is becoming almost common place nowadays and spoils a good thriller. All in all I thought Baldacci was back to his best writing and I am hopeful the same occurs with the next Robie book.
Read more
One person found this helpful
Report abuse

Peter Joiner
5.0 out of 5 stars John Puller and brother
Reviewed in the United Kingdom on 29 April 2016
Verified Purchase
Another great offering from David Baldacci. Story involving John Puller, his brother locked away for treason suddenly escapes from maximum security forces prison, Puller who has always believed in his brothers innocence can't understand why he would escape and though initially warned off investigating by his senior officer is suddenly requested to investigate by other senior officers of the armed forces.
Along the way he acquires a partner, not of his own choosing, he wonders if this partner is to help or hinder his investigation.
The story develops with the usual slaying's and unanswered questions with a battle of wits against a very good and confident liar. Some red herrings along the way cause some doubts but Puller keeps at it and as you would expect a result is achieved, maybe not all that he wishes for but life is like that !!
Read more
One person found this helpful
Report abuse
See all reviews
Back to top
Get to Know Us
Connect with Us
Make Money with Us
Let Us Help You
EnglishChoose a language for shopping.
© 1996-2021, Amazon.com, Inc. or its affiliates