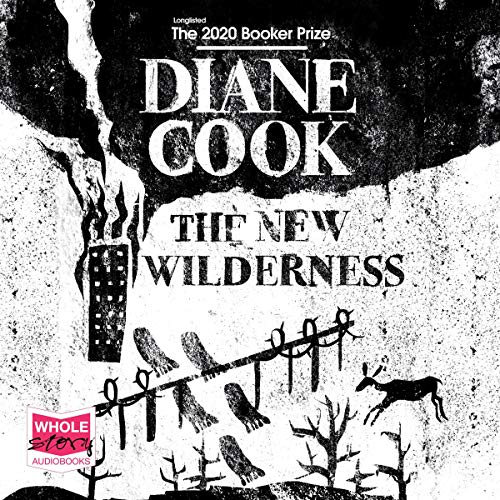 By completing your purchase you agree to Audible’s Conditions Of Use Amazon's Privacy Notice.
Sold and delivered by Audible, an Amazon company
Share
10 people found this helpful
Helpful
Report abuse
See all reviews

Adam
2.0 out of 5 stars A timid and tedious debut
Reviewed in the United Kingdom on 27 August 2020
Verified Purchase
The hardback edition is beautiful, and pleasantly light to hold, but that's where my praise ends.

Diane Cook’s 400-page book about people walking aimlessly around a wilderness has wandered onto the Booker Prize longlist and is on its way to being adapted by Warner Bros. Television. I do not envy the director who has to find some direction in what already felt like a protracted television series minus all the good bits.

The juiciest action takes place before the book starts: Bea flees the City with her poorly daughter Agnes and husband Glen, who, alongside 17 others, form the Community, a nomadic tribe fighting against the elements and wild animals in the Wilderness State. The limited action actually described within the time frame of the novel itself is comparatively sedate. Hundreds of paragraphs are devoted to walking: walking through rivers; walking through sage fields; walking through forests; walking up mountains; there might have been some sleepwalking, or that might have been me dropping off. The walking is tedious for the characters, but does that justify boring the reader? If The New Wilderness needed to be written at all, it should have started earlier in the timeline of events, when the characters first arrived in the Wilderness. Or it should have started at page 139, when one of the characters deserts the others, returning to the City, creating a vacuum that changes the relationships of the group and offers a glimmer of intrigue.

Thanks to the marketing hype, readers go into the novel expecting to discover a dystopian near-future with a landscape ravaged by climate change and pollution. Disappointingly, Cook’s world building is lazy. The novel is simply set in an uninhabited area of land in which the characters scoff at the quaint antiques of the old world, such as fireplaces. How droll! She hints that over-population is the cause of pollution that in turn threatens the ever-expanding City and causes characters to flee to the last Wilderness. She drops hints about a malign Administration controlling things, but I had difficulty believing that any government that allowed inner-city building to spin out of control would cherish a wild landmass enough to preserve it and limit its inhabitants to just 20 in number. Equally incongruous is the fact that the Community are controlled by rangers, yet individuals have the option to return to the City at any time they choose. The concept is weak. The New Wilderness is Lord of the Flies without the plane crash or the peril or the literary prose. It is The Walking Dead without the zombies.

Something that shook me out of my ennui was the portrayal of female sexuality, which was problematic to say the least. One female character flagrantly uses sex to assume joint leadership of the Community. Another female’s foremost character trait is her longing to get pregnant so as to secure the favour of a man. Meanwhile, the 12- or 13-year-old protagonist, Agnes, shortly after her first period, craves sexual intercourse with the only teenage boy in the group:

"she would have to have real sex to get pregnant and what they were doing wasn’t sex. Agnes knew it wasn’t real sex but didn’t know how to make it real sex... She had even tried to trick him one day by insisting the anthill they’d been sitting next to belonged to a rare poisonous kind of ant and that they needed to undress quickly... She had needs."

I am surprised this got published in 2020. It perpetuates disgusting misogynist tropes about insatiable female sexuality and young girls entrapping older men, the kind of stereotypes that are often spouted as excuses by paedophiles and rapists, rather than included in supposedly literary novels by middle-aged female authors. It turned my stomach, and clearly that wasn’t Cook’s intention. In seeking to write something fresh and liberating, she has penned something regressive and disempowering.

When it wasn’t about the sexual desires of children, this book was easy to read. The prose was clear, albeit a little colloquial and often repetitive. The narrative voice switched fairly comfortably from Bea’s to Agnes’s perspective. However, except insofar as it shunned action, there was nothing literary about it. Nevertheless, it is worth remembering that half of last year’s Booker Prize was awarded to an exceedingly easy read that failed to live up to its promise of literary merit (The Testaments by Margaret Atwood), so I cannot rule out the possibility that a lightweight judging panel might choose to reward this timid debut. But in my opinion, books that contain sentences like “the tippy tops of the mountains came into view” are not worthy of literary prizes.
Read more
83 people found this helpful
Report abuse

The Reading Room
3.0 out of 5 stars Captivity disguised as freedom
Reviewed in the United Kingdom on 7 August 2020
Verified Purchase
If you enjoy a challenging read, then this darkly dystopian book will probably fit the bill – 3 Stars

Ok, let’s get the elephant-in-the-room out of the way first: This is not a story I enjoyed in terms of it being a ‘good’ read, or even as an especially engaging tale, indeed if it wasn’t for the philosophical questions it raises, I might not of stuck with it at all. However, it does make one think…and, it does that very well.

Opening during a long-term experiment to measure human impact on a wilderness environment, the story’s focus is Bea and her young daughter, Agnes. Ranging over a period of around twenty years, the relationship between mother and child constantly shifts between nurturing and destructive. The reader is left in little doubt of their love for each other, but there is an increasing sense of distrust that constantly bubbles to the surface. That their interactions oscillate between showing innate need for each other, and unreserved rejection, makes for an often raw and uneasy read.

The wilderness features in much of the story, and there are some stunning descriptions of the interplay between people and fauna. Again, this swings from being beautiful and idealistic in some passages, to violent and disruptive in others. One thing this book never does is let the reader be too comfortable for too long; whether it’s examining the essence of humanity, motherhood, or freedom, it constantly employs brutal imagery to do so.

There were some aspects that didn’t perhaps work so well: Not least the ubiquitous (but totally unconvincing) rangers, and the tendency to portray humans as somehow separate from the environment rather than an integral part of it. Neither was I persuaded to mourn the loss of this wilderness – under Cook’s penmanship, it seemed to represent just another form of captivity. Overall though, it was her continual reliance on brutality to make a point that spoilt it for me.
Read more
21 people found this helpful
Report abuse

Misskin
2.0 out of 5 stars Disappointing
Reviewed in the United Kingdom on 17 August 2020
Verified Purchase
This is another ‘failed Utopia’ story, where the twist is to tell it through the eye of Agnes, only about eight or nine years old at the start. A small group of people, desperate to flee their ghastly cities, sign up for an experiment in living in the wild as early man must have lived. But, inevitably, repopulating Eden is doomed to failure because it’s done by imperfect people. Agnes spends most of the time trying to cope with adolescence, understand the crazy adults, and have a half-decent relationship with her difficult mother. The adults spend their time disagreeing and swapping loyalties. The scheme is hedged about with officialdom, the wild is enclosed by fences and prowling Rangers, and after six or seven years of things not working out, everyone is forcibly sent back to urban life so that the wilderness can be sold off to the filthy rich to build posh homes far from pollution and the hoi poloi. All pretty depressing, really. The ony character I really liked was Glen, Agnes' father, who comes across as a gentle soul. But he dies of neglect half-way through because he seems passive and refuses to engage with the commmunity in-fighting. When he grows weak, probably because the others deny him food, he's left to die because he's a burden. Man's inhumanity to man, once again. In this, as in other aspects of the book, I didn’t really feel Diane Cook had anything new to say, though she took a lot of words to not say it.
Read more
15 people found this helpful
Report abuse

chris palmer
4.0 out of 5 stars Page turner
Reviewed in the United Kingdom on 19 October 2020
Verified Purchase
Both bleak and brutal I found this book utterly compelling and very difficult to step away from, so much so that I read it in three days which is very speedy for me. A story of survival set on a planet whose natural resources have been squandered, in the not too distant future and only a few small steps away from where the human race and our planet are now. This made for uncomfortable reading, but the story was disturbingly believable and very readable. Within her book, Diane Cook has created characters who have become hardened by their new surroundings and what they must do to survive. Their struggle is described using very matter of fact description which adds to the brutality of their situation and surroundings. In addition to this, their reaction to death becomes more and more animal like and so too many of their other behaviours as the community moves from being a group of people to an animal like pack.  At the heart of the story is the intense and at times destructive mother daughter relationship between the two heroines of the story Bea and her daughter Agnes. Bea is a character who challenges your feelings towards what it means to be a strong woman and the sacrifices of motherhood. Agnes, who only vaguely remembers her previous life before her life in the new wilderness embarks on the journey from child to young woman in the harshest of environments.
Read more
5 people found this helpful
Report abuse

K. Hicks
4.0 out of 5 stars Pretty standard Booker longlist
Reviewed in the United Kingdom on 8 August 2020
Verified Purchase
I hope I don’t sound sexist but a dystopian novel, mainly about a mother daughter relationship, by a female author, it feels like a certainty for the Booker longlist. I was engaged by this book but not profoundly moved.at times I felt it needed a good editor to cut down some of the rambling prose and the plot was fairly predictable. Happy to recommend it if you have plenty of time on your hands.
Read more
5 people found this helpful
Report abuse
See all reviews
Back to top
Get to Know Us
Connect with Us
Make Money with Us
Let Us Help You
EnglishChoose a language for shopping.
© 1996-2021, Amazon.com, Inc. or its affiliates