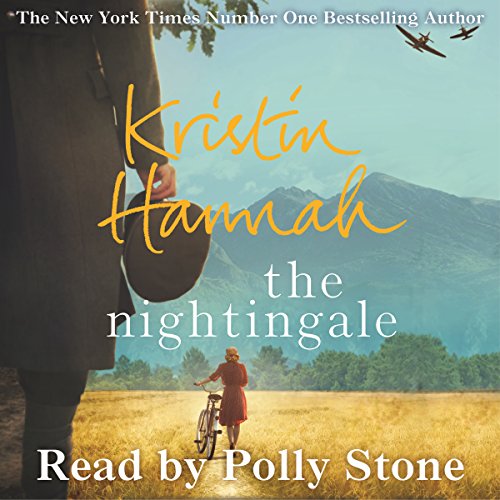 Two sisters. One must be brave. One should be afraid. Bravery, courage, fear, and love in a time of war. Despite their differences sisters Viann and Isabelle have always been close.

Younger, bolder Isabelle lives in Paris while Viann is content with life in the French countryside with her husband, Antoine, and their daughter. But when the Second World War strikes, Antoine is sent off to fight, and Viann finds herself isolated, so Isabelle is sent by their father to help her.

As the war progresses, the sisters' relationship and strength are tested. With life changing in unbelievably horrific ways, Viann and Isabelle will find themselves facing frightening situations and responding in ways they never thought possible as bravery and resistance take different forms in each of their actions.

Vivid and exquisite in its illumination of a time and place that was filled with atrocities but also humanity and strength, Kristin Hannah's novel will provoke thought and discussion that will have readers talking long after they finish listening.

Meghna Sodha
4.0 out of 5 stars A tale of fright vs bravery, humility vs humanity
Reviewed in India on 4 August 2021
Verified Purchase
This book is one of the best sellers of all time. It narrates a tale of sister duo in France during World War II and their struggles and hardships to survive against the brutal cruelty of Nazis. It is an amazingly well-crafted and throughly enjoyable piece to read.

Vianne (Rossignol) Mauriac and Isabelle Rosignol are daughters of Jullien Rossignol. After serving in World War I and death of his wife; Julien was emotionally broken and unable to stay attached to his daughters. The two sisters are the protagonist of the novel.

Vianne is of fourteen at the time of her mother's death. After feeling deep affection towards Antoine Mauriac, she marries him and forgets that her four year old sister needs her. She stays in the quite village of Carriveau, with her husband and daughter Sophie. But Antoine is being called for to serve in World War II and it is hard for her to believe that France will be invaded by Nazis. Difficulties become part of her life and survival, a big question.

Isabelle, a four year old girl who needs love and attention was totally abandoned by both her father and sister. After being expelled from multiple girls' school frequently, at the age of eighteen she accidentally meets Gaetan and falls in love with him. Again, she is being neglected by her love and joins French Resistance Movement against Nazis that justifies her rebellious tendencies.

Germany takes control over France and the story of these girls moves solemnly. Their courage and fear, sacrifices and endless pain, bonding and values for family are the real essence of the story. Calm, clever and courageous Vianne along with fearless, fierce and fighter Isabelle (The Nightingale) are the most powerfully written characters that may pound hearts with both sorrow and pride.

It is indeed a commendable and graceful work by the author that fetches tears. Events can be felt in front of the eyes. Some authentically described episodes bring goosebumps. It's a beautiful portrayal of French victims of World War II who celebrate resilience and victory for freedom.

Calypso
2.0 out of 5 stars Missed Opportunity
Reviewed in the United Kingdom on 15 November 2018
Verified Purchase
The Nightingale is the story of two sisters caught up in occupied France during the second world war. Both have remarkable stories to tell. In part the book is a frame narrative with one sister reflecting back forty years from 1995. The identity of the narrator i.e. which sister is not revealed until toward the end of the novel, although it is fairly obvious from the third chapter.

The research for the book is lamentable. There are glaring historical, cultural and geographical inaccuracies that detract from the story. There are also plot errors and straightforward mistakes littering the text. It would be unfair to expose the main errors as it will spoil the plot for anyone wishing to read the book, but for example, the main town in which the story is set, the fictional Carriveau, starts in German occupied France not far from Orleans or Tours. Toward the end of the story it has moved a few hundred miles south to be near Oradour sur Glane, not far from Limoges. Members of the French resistance forget which are pseudonyms and which are real names. Laurence Olivier is considered an appropriate name to avoid attention. A giant steel wheel becomes a stone wheel in the course of just one paragraph.

The author appears to have cobbled together scenes from most of the famous second world war novels: Schindlers List, The Boy in the Striped Pajamas, The Book Thief. At one point it appeared as if a Tale of Two Cities was going to make an appearance. The effect is of a massive cliché and a desperate lack of originality.

There is an obsession in making the two heroines stronger than the men. For example, a starved, weakened nineteen year old woman is made out to be stronger than young, fit, well trained airmen.

The writing itself varies in quality. At times, especially at the beginning, it isn’t bad, but it does become repetitive and sentimental. There are times it descends from an historical novel to become something of a farce like the TV series Allo Allo, and becomes something of an insult to the brave women in particular who fought with the resistance in the second world war.

However, what the book does have is an engaging story line, hook and pace. Although risible and sentimental in places, it is never boring and I read it to the end. The shame is that with a few more edits and better research, it could have been something special.
Read more
70 people found this helpful
Report abuse

RustyJames
1.0 out of 5 stars Editor required!
Reviewed in the United Kingdom on 10 February 2019
Verified Purchase
A compelling yarn ruined by many factual mistakes. Where’s the editor or researcher?
There were references to the smell of hay in April in France (wrong season!), hummingbirds on roses in a French garden (hummingbirds don’t live in France and don’t feed on roses!), misspelt German words, plenty of typos in English.
It just didn’t at all evoke France/continental Europe (I’m Swiss).
The success of this book flies in the face of the authors of historical novels who meticulously research their field.
Read more
58 people found this helpful
Report abuse

Mrs. B Brandon
5.0 out of 5 stars A gambit of emotions
Reviewed in the United Kingdom on 14 May 2017
Verified Purchase
I cannot recommend this book highly enough. It had me reading till the early hours of the morning. Every emotion I have ever felt in my life is in this book. I have always been fascinated by WW11 stories and this 1 did not fail me. I have read many books and watched many films on the atrocites of that era and this has given me a new insight on the French Resistence. Superb storyline of a small French town and its citizens being invaded by the Germans. How families and lifelong friends are torn apart. Of the fear, the love and most of all the sheer bravery of the people got them through those devastating years. I certainly could not have done what they did. This book should be on every schools reading list so the children of today could learn how precious lives are. Thank you Kristin Hannah for giving me yet another excellent book to read.
Read more
64 people found this helpful
Report abuse

Sharon Maas
2.0 out of 5 stars Implausible
Reviewed in the United Kingdom on 30 October 2018
Verified Purchase
I love historical fiction, especially world war fiction, but this book did not ring true to me at all. Many implausible issues jumped off the page at me, but I'll only mention two here:
First of all, Isabelle's code name, Anyone who has read even a single book about undercover work during the wars would know that the first rule in giving an agent a code name is that it does not even hint at the agent's real identity. Now Isabelle's surname is Rosignol. Her code name is The Nightingale. Rosignol means nightingale in French. I rest my case.
My second criticism has to do with Isabelle's character. We first get to know her as a wild, rebellious, hard-headed teenager who always gets her own way. We are supposed to believe that overnight, without any gradual coming-of-age moments, she turns into a mature and selfless heroine capable of leading grown men over mountains she has only navigated once in her life, risking life and limb to do so, obeying orders like a docile little lamb. Sorry, no!
Read more
36 people found this helpful
Report abuse

Closet Romantic
4.0 out of 5 stars American English and idioms detract
Reviewed in the United Kingdom on 15 August 2017
Verified Purchase
I give this book 3½stars. It's not the amazing work that so many people seem to think. Maybe they should read more wsr fiction (or even fact). European stories written in American English, using American idioms and ideas annoy me. This is one reason this book dropped a star. Also a couple of research issues. It's not a spoiler to say that antibiotics weren't in common use until the very end of, and after WW2. They were still being discovered and researched when mentioned briefly in this book. I am also uncertain where a French person would have found a shower curtain (not going to tell you what it was used for). French plumbing still leaves a lot to be desired and I doubt whether there were many showers, with or without curtains in small town France in the 1940s. To the story - it's one that has been told many times before and as such this is not a book that reveals unknowns. It's about survival rather than death and it is well written. For me, the final two chapters were excellent. But I prefer Sebastian Faulks for a well written war novel.
Read more
53 people found this helpful
Report abuse
See all reviews
Back to top
Get to Know Us
Connect with Us
Make Money with Us
Let Us Help You
EnglishChoose a language for shopping.
© 1996-2021, Amazon.com, Inc. or its affiliates