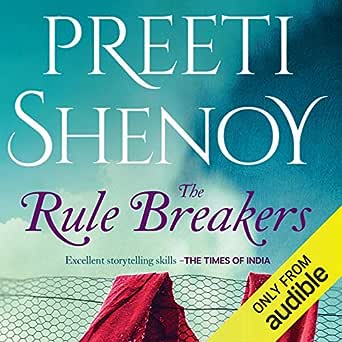 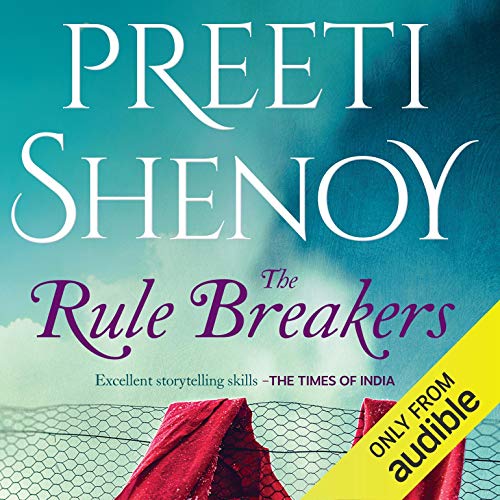 4.2 out of 5 stars
4.2 out of 5
354 customer ratings
How does Amazon calculate star ratings?
Amazon calculates a product's star ratings based on a machine learned model instead of a raw data average. The model takes into account factors including the age of a rating, whether the ratings are from verified purchasers and factors that establish reviewer trustworthiness.

Milauni Pujara
5.0 out of 5 stars One of the Most Riveting Stories You Will Read! Feel 'ROCKET' of Emotions!
Reviewed in India on 22 September 2018
Format: PaperbackVerified Purchase
The Rule Breakers- First of all a very enticing cover. The red fluttering Duppata on the fence symbolically - helps you understand that there is always a thin fence between the Rule Followers and the Rule Breakers. This book sends you on a journey of plunging into your own conscience of where do you stand- on which side of the fence.

Veda (the protagonist) with her dreams, broken dreams and new dreams helps you understand that the Rules You Break somewhere mold you and Bring the Inner You Out. Take this journey and go through torrid emotions that come with deep friendships, loss and the fight between your heart and brain to be a Rule Follower or a Rule Breaker.

Amongst the Simple and highly interesting plots, sub-plots- You are in Awe of What Magic Preeti Shenoy can create with her words- she simply paints pictures with her words in your mind. At one point- you are breathing the fresh mountain air in Joshimath and feel claustrophobic the other moment while sitting in a cramped flat in Pune. This story is of Liberation- Finding the Rules That Actually Define You!

It is surely one of the matured and sensitivity- laden stories that you will only put the wings beneath your wings! Here's to many many more!

One tip- Dont Binge read it- let the words hit the right corners of your mind and create its magic.

Suraj
5.0 out of 5 stars MUST READ -STORY IS THE WINNER & PREETI SHENOY COMES up with a SIMPLE YET A STRONG MESSAGE
Reviewed in India on 23 September 2018
Format: PaperbackVerified Purchase
Recieved the book on a weekend .Started reading and finished it within a day.

Anyone just can connect to the story. The story talks about sibling bonding, friendship which has been shown beautifully through letters.

Veda the main protagonist who is strong willed & determined yet timid & passive stands out very well throughout the book and the reader can relate to the character. It can be any individual in general who follows all the rules and struggles to stand up for themselves due to societal conditioning.

Her sudden unplanned marriage,initial marriage troubles,deteriorated performances in academics,the societal conditioning she was brought up with due to which she keeps mum when she is being humiliated in order to adhere to her rules. How she steps out of her comfort zone and breaks the rules & discovers herself is the crux of the story.

How she overcomes it in the end has been described beautifully.

Quotes like 'Carve Your Path' and many other thoughtful sentences are just very simple yet so deep.

The other part in the story is SANKALP an organisation which tries to do it's bit to help children from poor families which is the turning point in Veda's story which describes the struggles,challenges the school children from the poor families go through to educate themselves. Just moves you so much and sub consciously motivates to contribute for their well being.

The challenges,efforts the trio Kanika,Veda and Ron go through to stabilise and keep it going to ensure students benefit till the end to achieve their goal of 100% results of Class 10 is just terrific. Kanika's character as a no-nonsense,firm yet sensitive and a sympathetic is terrific.

Best Sequence in the story : The confrontation with the Inquiry Committee.

Funny characters in the story : Ron(his troubles to get used to Indian culture during his stay in Pune), Sanju.

Kindle Customer
4.0 out of 5 stars Rules should not be your crutches....
Reviewed in India on 19 September 2018
Format: Kindle EditionVerified Purchase
A beautiful sensitive book. One of my fav lines in this book is ...become wings and not crutches in someone else..things happen to us and we change as persons...if the changes makes us stronger wiser and kinder we should learn to embrace the change...another beautiful heart touching story by my fav author Preeti shenoy..the exchange of letters is an interesting way the story has taken way. I liked the relationship between Vidya and Veda. The detailed description of sankalp has moved something within me to join something like this..kanika's character is a strong one and so is that of Vidya. My fav character is Vidya. Would recommend one read at least of this book...
Read more
11 people found this helpful
Helpful
Comment Report abuse

Ketki Jadhav
5.0 out of 5 stars Loved it!
Reviewed in India on 22 September 2018
Format: PaperbackVerified Purchase
After reading a hundred little flames by Preeti Shenoy, I was eagerly waiting for her next book. And this one is totally different from previous books. I was so confident that I pre-ordered it. And I'm so glad that it surprised me with even better than what I'd expected. I could connect to all the characters and just can't get off the book. I'm reading it slowly because I want enjoy every detail of it. Preeti Shenoy is the only Indian fiction writer I would read.
Read more

Coyote
1.0 out of 5 stars Average writing
Reviewed in India on 9 November 2018
Format: Kindle EditionVerified Purchase
The author was recommended by a friend and is supposed to be an Indian bestselling writing novelist. But the book was a disappointment. The language was uninspiring and rather pedestrian and the words did not paint a picture in my mind. The story is set in the mountains for the first part but you do not feel that while reading it. Also the writing was very amateurish. The story line is good but the writing lets it down. Maybe this was not the author's best efforts. My comments are only on this book. Hope to read a better novel from the same author soon.
Read more
3 people found this helpful
Helpful
Comment Report abuse

Rashmi Pai-Prabhu
4.0 out of 5 stars The rule breakers
Reviewed in India on 11 July 2019
Format: PaperbackVerified Purchase
Book review 3:
.
.
The Rule Breakers by Preeti Shenoy .
.
.
Foreword : What strikes to you about this book is its simple and easy to comprehend language. The title is quite intriguing too and makes you want to explore further. .
.
.
About the book: This is the story of Veda, brought up as a quintessential girl next door, going about her normal life. It is narrative about how this Veda changes. How marriage and succeeding circumstances result in bringing out her tough side, a side she never new existed . How love in different forms touches Veda's life and how she emerges stronger for it. Preeti has wonderfully captured by way of the letters in this book, the protagonists life and the changes it undergoes. A thought provoking read .
.
.

Takeaway : Like a soft egg that is unwilling immersed in hot water and ends up boiled and taut, sometimes adverse circumstances do make for a stronger person. .
Read more
One person found this helpful
Helpful
Comment Report abuse
See all reviews from India

P.A. WHEELER
5.0 out of 5 stars Exemplary narrative clarity and humanity
Reviewed in the United Kingdom on 18 June 2019
Format: Kindle EditionVerified Purchase
I have loved and admired everything I've read by Preeti Shenoy: she understands the specific value of writing in an age dominated by motion picture communication, chooses relevant and responsible topics, avoids gratuitous violence and bling, is not tainted by fame and fortune. A warm, sensitive, exemplary role model to us all, young and old, from every background.
Read more
Helpful
Sending feedback...
Thank you for your feedback.
Sorry, we failed to record your vote. Please try again
Report abuse

Sushila
5.0 out of 5 stars An uplifting and inspiring book
Reviewed in the United Kingdom on 8 October 2018
Format: Kindle EditionVerified Purchase
I couldn't put this book down.
It made me cry and laugh t the same time.
A reflection on how things still are for Asian females but at the same time this book teaches how to not only be strong but also to be very kind.
Read more
Helpful
Sending feedback...
Thank you for your feedback.
Sorry, we failed to record your vote. Please try again
Report abuse