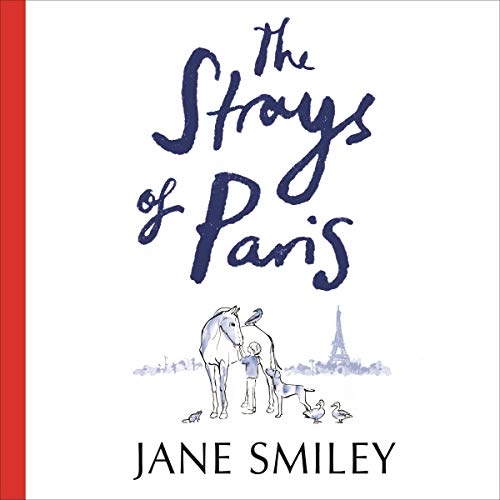 The Strays of Paris

Paras is a spirited young racehorse living in a stable in the French countryside. That is until one afternoon when she pushes open the gate of her stall and, travelling through the night, arrives quite by chance in the dazzling streets of Paris.

She soon meets a German shorthaired pointer named Frida, two irrepressible ducks and an opinionated crow, and life amongst the animals in the city’s lush green spaces is enjoyable for a time. But everything changes when Paras meets a human boy, Étienne, and discovers a new, otherworldly part of Paris: the secluded, ivy-walled house where the boy and his nearly 100-year-old great-grandmother live quietly and keep to themselves. As the cold weather of Christmas nears, the unlikeliest of friendships blooms between human and animals.

But how long can a runaway horse live undiscovered in Paris? And how long can one boy keep her all to himself? Charming and beguiling in equal measure, Jane Smiley’s novel celebrates the intrinsic need for friendship, love and freedom, whoever you may be....

From Jane Smiley, the Pulitzer Prize-winning author of A Thousand Acres, The Strays of Paris is a captivating story of a group of extraordinary animals - and one little boy - whose lives cross paths in Paris.

4.2 out of 5 stars
4.2 out of 5
63 global ratings
How are ratings calculated?
To calculate the overall star rating and percentage breakdown by star, we don’t use a simple average. Instead, our system considers things like how recent a review is and if the reviewer bought the item on Amazon. It also analyses reviews to verify trustworthiness.
Top reviews

DB
5.0 out of 5 stars Just what's needed: a feel-good book!
Reviewed in the United Kingdom 🇬🇧 on 13 March 2021
Verified Purchase
A book about talking animals? Nobody could pull it off except Jane Smiley! This is an absolutely enchanting book - a glorious escape from the misery and boredom of lockdown. To my amazement, I couldn't put it down!
Read more
One person found this helpful
Report abuse

Englishrose
5.0 out of 5 stars I think you could read this to children it’s such a lovely story.
Reviewed in the United Kingdom 🇬🇧 on 7 March 2021
Verified Purchase
Fabulous read...loved it. Animals that talk and speak to each other.....got it on kindle but had to buy the book.
Read more
Report abuse

Pentimenta
4.0 out of 5 stars not my favourite Smiley
Reviewed in Germany 🇩🇪 on 26 January 2022
Verified Purchase
I keep the Smileys that I like, and there are many. This one is a nice fairytale, and I read it all, and liked it in a mild way, but afterwards I put the book on the resell pile with nary a thought. I knda liked how she showed what makes horses tick (she sure knows horses) as opposed to, like, dogs, but if it wasn't for the flair of Paris holding it all together the story would never work.
Read more
Report abuse
See all reviews