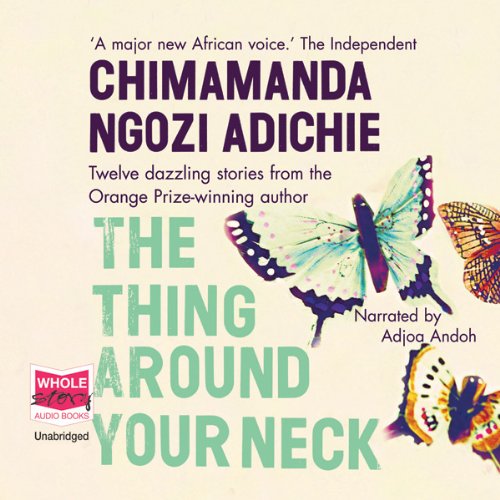 The Thing Around Your Neck

By completing your purchase you agree to Audible’s Conditions Of Use Amazon's Privacy Notice.
Sold and delivered by Audible, an Amazon company
Share
2 people found this helpful
Helpful
Report abuse

shivani
5.0 out of 5 stars A new favorite
Reviewed in India on 8 February 2020
Verified Purchase
There is a review about this book that says its author has portrayed full lives, whole worlds with a few deft sketches. After reading the first two stories, I thought, indeed!. Every word adds to the story with quite a few carelessly strewn jewels. Like this one "It is diffidence about afterlife that makes people cater to religion". I may not have quoted the exact words but the essence is same.
Read more
One person found this helpful
Helpful
Report abuse

mansi mudgal
5.0 out of 5 stars A brilliant collection that is rich and sublime
Reviewed in India on 15 September 2018
Verified Purchase
The Thing.... is wonderfully written, it has stories that are rich in life and details; they make you think and give you a glimpse into the Africa of today and the life of the country’s migrants.

Adichie’s writing is clear, simple and delivers a hard hitting message when needed; issues like racism, patriarchy, after effects of colonialism and civil war have been dealt deftly. Usually with short stories there are hits and misses.... The Thing around your Neck is a clear winner.
Read more
One person found this helpful
Helpful
Report abuse

Brian
4.0 out of 5 stars Well written
Reviewed in India on 23 June 2019
Verified Purchase
Chimamanda is one of my favourite writers. Her books always transcend through time, gives the reader the power of imagining how life would have been in Africa and the different experiences people would have had both in Africa and America during the 1980s, 1990s. She is a stellar writer.
Read more
One person found this helpful
Helpful
Report abuse

bhavani
5.0 out of 5 stars Vivid
Reviewed in India on 27 May 2017
Verified Purchase
You can see the world she's describing right before your eyes... Real, vivid, yet without any melodrama. Another must read by chimimanda...
Read more
One person found this helpful
Helpful
Report abuse

new_mom
5.0 out of 5 stars A potpourri of wonderful stories
Reviewed in India on 6 February 2017
Verified Purchase
The short stories are beautiful. The plot is endearing, The collection is poetic with the subtle nuances of masterful story telling at its best. The stories are well rounded. Poignant and rich.
Read more
One person found this helpful
Helpful
Report abuse

Apurva
4.0 out of 5 stars Stories about African women
Reviewed in India on 10 April 2021
Verified Purchase
The book is a collection of short stories about how women were treated in Africa. It is interesting because you hear it from the point of view of the women which brings out the extra emotional connect.
Read more
Helpful
Report abuse

Utkarsha
3.0 out of 5 stars Great book for one time read
Reviewed in India on 15 February 2019
Verified Purchase
The stories are touching. The emotion hits you even though the setting of the events is very foreign to the Indian population.
Read more
Helpful
Report abuse
See all reviews

simon
5.0 out of 5 stars This is excellent.
Reviewed in the United Kingdom on 11 August 2019
Verified Purchase
The stories are all about the development of characterization, theme and setting, rather than the twist in the tale technique being employed at the end. They also read like anal novellas because She can convey so much in such a low word count which is no rare feat. She is born writer and has colossal talent, combined with profound insights and perceptiveness. Every story works incredibly well and the diversity of the narratives is impressive. If you like Adichie's other novels, then, this collection of short stories comes highly recommended.
Read more
4 people found this helpful
Report abuse

Garry Essendine
5.0 out of 5 stars Outstanding collection of short stories
Reviewed in the United Kingdom on 22 October 2013
Verified Purchase
I only bought this because I was searching for Achebe's "There Was A Country" (at that time unavailable on Kindle) and Amazon suggested I might like it. I'm so glad I did; Adichie is a brilliant writer, and having read and devoured this I immediately went and bought her (then) two full-length novels (she's since written another one), and in short order she became my favourite contemporary author.

This collection shows her at the peak of her powers - her characterisation, scene-setting, storytelling, her ability to make you *care* about someone you only met a couple of lines ago, are without equal. All her novels are full of characters who appear for a few pages, a brief flicker of interaction with the main storyline before vanishing (sometimes for many chapters on end, sometimes forever), and that's a skill she uses to maximum effect here, the short story the perfect format for Adichie to display her brilliance.

I know I'm gushing with praise here. I can't help it, she really is that good. Read this book. Read it now.

The order of the stories is interesting, and I wonder how many people might be put off by the sample - "Cell One", which opens the collection, is the most uncompromising thing here, dumping the reader straight into a stark, tightly-wound tale of middle-class family breakdown and prison brutality peppered with Igbo phrases and Nigerian slang and references to things like cults and the harmattan. Adichie has talked in lectures about growing up reading Enid Blyton, packed with alien cultural references; the first few pages of "Cell One" provide the Western reader with a similar experience, a similar expectation to get with the programme straight away. Do persevere, it is absolutely worth it. Some of the stories are more shocking ("The American Embassy" and "Tomorrow Is Too Far" both pack a wounding gut punch whose effects you'll never quite shake off), but most of the drama here is internal, vignettes of intense domestic dramas and questions of identity in Nigeria and in the diaspora. Not one of them is forgettable, staying with you to be savoured and reflected over even as you inevitably rush to start the next one because you can't wait to hear more.

Picking out highlights is a waste of time because there's not really a weak link in the collection. The title story, from which several themes are picked up in Adichie's third novel Americanah, is probably the best short story I've ever read, told entirely in the second person and painting just about the most convincing character portrait you'll ever see, is a magnificent centrepiece to the collection, but in truth pretty much every story here would be enough to carry a whole volume. "Jumping Monkey Hill" is a fascinating one; it's too tempting to see the central character, a Nigerian writer attending a pan-African writers' workshop hosted by an insufferable white English academic at a hokey safari-themed resort in South Africa, as Adichie herself. I'd love to know how autobiographical it really is, because the British characters come across as (literally) unbelievably patronising, and yet the host's attitude to the heroine's workshop submission - a true story from her life with a couple of key details changed - is also to call it far-fetched, as if to warn the reader not to make the same mistake with Adichie's own work. The final story, "The Headstrong Historian" is just Adichie showing off, a sublime piece of fan fiction set in the timeline (and written in the style) of Achebe's "Things Fall Apart", centred on a background character from the original novel, and done with such staggering aplomb it takes the breath away as you first realise what she's doing and then stand stunned as she carries it off.

Chimamanda Ngozi Adichie hasn't long turned 30; not only is she one of our best young writers, I don't think the "young" qualification is needed. This is such a good introduction to her work, I already know I will buy every book she ever writes.
Read more
7 people found this helpful
Report abuse

Amazon Customer
5.0 out of 5 stars The thing around your neck
Reviewed in the United Kingdom on 27 September 2019
Verified Purchase
The irony of the Catholic teachings was that, it looked upon other religions as pagan, yet it practiced the worship of idols which was against the teachings of the bible, Jews and Moslems did not worship idols. What was more heathen than the breaking of all the rules in the bible such as burning innocent women and the crusades?
Read more
One person found this helpful
Report abuse

San Patch
4.0 out of 5 stars Wanted more
Reviewed in the United Kingdom on 31 May 2010
Verified Purchase
I confess: I love short stories; the genre tests a writer's ability to transport the reader into the lives of the characters with concision and minimal flourish. Therefore, I was excited to buy The Thing Around Your Neck; I was not disappointed.

This collection of short stories have a recurring personae dramatis: Nigerian women. The stories portray the lives of Nigerian women in Nigeria and the United States with themes ranging from arranged marriage (The Arrangers of Marriage) and homosexuality (The Shivering) to the impact of colonialism on identity (The Headstrong Historian).

My favourite story is Tomorrow is too Far. It is written in the second person (you) and is about the death of a boy, Nonso. At the start, we know that Nonso's sister (the main character) is jealous of Nonso because he is the the favoured child of their Grandmother. With her cousin's connivance, they scare Nonso, who falls off a tree and die. Eighteen years later, they (sister and cousin) meet to reflect on Nonso's death. More than a reflection of the events, the story subtly questions the system of primogeniture that is practised in Nigeria.

Chimamanda Adichie is clearly a gifted writer (I loved Half A Yellow Sun). However, some of the characters were too flat to be believable. For example, Grace, a daughter of a missionary who challenges colonial notions of African primitiveness. As a Nigerian, I could identify with the character, but I could not appreciate her in the context of a short story; Chimamanda skipped too many layers of history and meaning, rendering Grace terribly unbelievable.

Chimamanda is no Langston Hughes, one of my favourite short story writers (see the Ways of White Folks). Nevertheless, I enjoyed reading this collection of short stories and hope that she can improve her art. The Thing Around Your Neck is no history lesson; there is no overt agenda or lecture here. If you want to kick back and enjoy a nice read on a Sunday, then I would recommend this book; it deserves three stars.
Read more
2 people found this helpful
Report abuse

kamal
1.0 out of 5 stars Avoid
Reviewed in the United Kingdom on 7 April 2021
Verified Purchase
Her thoughts on race and politics from a Afro-centric lens is lost in the craft of poor writing. Painful to read amidst whining characters that all clearly reflect Adichie’s thoughts on America. This book was mandatory reading for my University degree and it’s extremely shocking. I wanted to enjoy it yet struggled to wrap my head around the fact that this book is highly acclaimed and is found in the ranks amongst the writing of Maya Angelou and Toni Morrison. Adichie’s book is patronising and fails to have any flow to it whatsoever. Throughout, it felt as though I was reading a book aimed at children.
Read more
Report abuse
See all reviews
Back to top
Get to Know Us
Connect with Us
Make Money with Us
Let Us Help You
EnglishChoose a language for shopping.
© 1996-2021, Amazon.com, Inc. or its affiliates