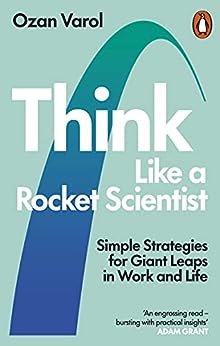 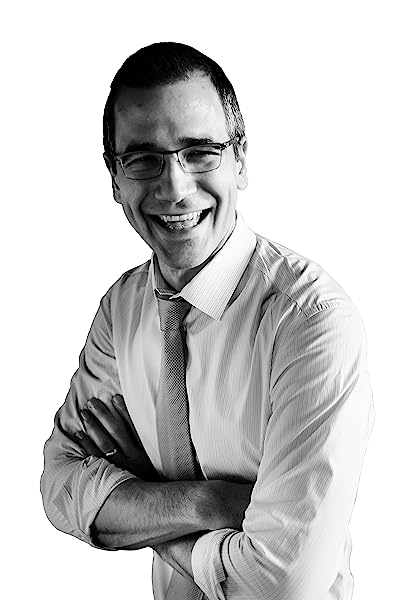 Think Like a Rocket Scientist: Simple Strategies for Giant Leaps in Work and Life Kindle Edition

by Ozan Varol (Author) Format: Kindle Edition
See all formats and editions
Sorry, there was a problem loading this page. Try again.

Named a "must read" by Susan Cain, "endlessly fascinating" by Daniel Pink, and "bursting with practical insights" by Adam Grant.

In this accessible and practical book, Ozan Varol reveals nine simple strategies from rocket science that you can use to make your own giant leaps in work and life -- whether it's landing your dream job, accelerating your business, learning a new skill, or creating the next breakthrough product. Today, thinking like a rocket scientist is a necessity. We all encounter complex and unfamiliar problems in our lives. Those who can tackle these problems -- without clear guidelines and with the clock ticking -- enjoy an extraordinary advantage.

Think Like a Rocket Scientist will inspire you to take your own moonshot and enable you to achieve lift-off.

Not just an engrossing read--it's bursting with practical insights. Ozan Varol's dazzling debut might change how you approach problems. Houston, this book has solutions (Adam Grant, betselling author of ORIGINALS)

Thinking like a rocket scientist is not rocket science! Packed with witty writing, insightful advice, and invigorating stories, this must-read book will change the way you see the world--and empower you to change the world itself (Susan Cain, New York Times-bestselling author of QUIET)

When the stakes are high, the unknowns are threatening, and the problems seem insurmountable, you need a superhero ― which means you need Ozan Varol. He’ll show you how to master the cognitive skills of a rocket scientist. And by the time you finish reading his endlessly fascinating book, your thinking will be bigger, better, and bolder (Daniel H. Pink, betselling author of WHEN, DRIVE, and A WHOLE NEW MIND)

You're smarter than you think. Ozan Varol makes a compelling case for each of us to level up and to contribute at a level we've talked ourselves out of (Seth Godin)

The rocket scientists I know are among the biggest dreamers the world has ever seen. Ozan Varol has written a fascinating, practical, and mind-expanding book about how we can all benefit from thinking like a rocket scientist. This book will help you make your own seemingly crazy moonshot a reality (Julian Guthrie, New York Times-bestselling author of HOW TO MAKE A SPACESHIP and ALPHA GIRLS) --This text refers to the hardcover edition.

Ozan Varol is the highest-rated professor at Lewis & Clark Law School. Varol's articles have appeared in outlets such as the Wall Street Journal, Newsweek, BBC, TIME, CNN, Washington Post, Slate, and Foreign Policy. He blogs weekly on his website, ozanvarol.com and his articles reach millions of readers each month. A sought-after public speaker, Varol has given countless radio and television interviews, and delivered keynote speeches both to small and large crowds at major corporations, nonprofits, and government institutions. Before becoming a Law Professor, he served on the operations team for the 2003 Mars Exploration Rovers and the Cassini-Huygens mission that sent a probe to Saturn. --This text refers to the hardcover edition.

4.5 out of 5 stars
4.5 out of 5
1,046 global ratings
How are ratings calculated?
To calculate the overall star rating and percentage breakdown by star, we don’t use a simple average. Instead, our system considers things like how recent a review is and if the reviewer bought the item on Amazon. It also analyses reviews to verify trustworthiness.
Top reviews

Natarajan Mahalingam
5.0 out of 5 stars Simple strategies that help with the entire cycle of ideation!
Reviewed in India on 24 March 2021
Verified Purchase
Guaranteed - You will not keep this book down! This is a page turner, must-read of a book - coming from a debuting author, Ozan Varol. The author takes us through multiple, simple strategies that will help us move through the 3 phases of an idea - launch, accelerate, and achieve - replete with real-time examples from his experience with NASA/Mars Rover project, academia, and industry. Each of these mini thoughts or strategies can be put to use individually in situations that you encounter during specific phases of idea movement or as a whole, from idea generation to implementation and beyond
Read more
7 people found this helpful
Helpful
Report abuse

Sandy
5.0 out of 5 stars A good read
Reviewed in India on 9 February 2021
Verified Purchase
I have read several self help books and this one set another milestone. In a way it further clarifies our thinking. The biases we humans have and how we aspire to quickly assign them to our lives. You would love the way the book is organised. A finally Rockets Scientist are humans to who have to struggle with the same biases as we do. Good read. Enjoy
Read more
4 people found this helpful
Helpful
Report abuse

Clever Customer
3.0 out of 5 stars Little bit boring and repeating same
Reviewed in India on 14 October 2021
Verified Purchase
Book has lots of quotes. It's a kind of collection of quotes of scientists. It is not clear some times. Mostly it's about not confirming your understanding. Keep your self curious and see your shortcomings. But it's not what we are looking for. It looks rocket science is not applicable directly to earth people. We need simple solution and working mindsets, instead of skeptic.
Read more
Helpful
Report abuse

Initially I received a pirated version, table of contents was not there and there were marks on pages as photocopier machines add. Returned that and got a decent version.
Read more
One person found this helpful
Helpful
Report abuse

Unnati m.
5.0 out of 5 stars Not reading this book will be a blunder!!
Reviewed in India on 17 June 2021
Verified Purchase
Best non fiction book I've read this year.
It's like a coaster ride and a must read for anyone who wants to change the way he thinks...
Read more
One person found this helpful
Helpful
Report abuse

Kindle Customer
5.0 out of 5 stars Excellent book
Reviewed in India on 24 November 2021
Verified Purchase
I read this book as one of my friends suggested on LinkedIn.It is a thoroughly motivating book and each chapter has something to learn and apply in our daily lives at work and general in order to succeed.Highly recommend...
Read more
Helpful
Report abuse

sundaramurti
5.0 out of 5 stars Guide to thoughtfulness!
Reviewed in India on 28 July 2020
Verified Purchase
This is an one of the best structured books I have ever read with such ease in the fluency of infusing ideas in arguments with clear examples from various fields! To pick a favourite topic was reasoning from first principles which was mind opening! Thank you sir, Ozan!
Read more
One person found this helpful
Helpful
Report abuse
See all reviews

Mands
5.0 out of 5 stars Compelling Strategies to Improve Critical Thinking with Rocket Science Anecdotes Thrown In.
Reviewed in the United Kingdom on 11 June 2020
Verified Purchase
I loved this book. I work in IT systems design and already need to think analytically and logically. So I picked up this book wondering what I really would be able to learn from it; but willing to give it a go, as it had been recommended to me.
Such an engaging, well written, well structured book, with tangible strategies for both identifying and avoiding pitfalls in critical thinking and analysis, with really relatable anecdotes from what has been learned from building for space travel. Complex concepts described simply and accessibly.
I learnt a huge amount and am already putting the outlined strategies into action for both work and personal life!
Read more
11 people found this helpful
Report abuse

Bryn T.
5.0 out of 5 stars Oustanding Read...
Reviewed in the United Kingdom on 9 July 2020
Verified Purchase
I read a lot - a book a fortnight, sometimes more and it takes a lot to keep me interested but this book ticks all the boxes. Interesting, entertaining, well written and so practical in terms of applying the problem solving skills outlined by the author - I thoroughly enjoyed it - highly recommended.
Read more
7 people found this helpful
Report abuse

Linda Terry
5.0 out of 5 stars Best non fiction book I read this year
Reviewed in the United Kingdom on 12 December 2020
Verified Purchase
I do not normally write book reviews because, frankly, whether a book is good or not is highly subjective. But this book? This is groundbreaking, it woke me up, it jolted me into action. I bought it for relatives and friends. I cited it on presentations at work and in conferences. Now we just need to get the message out there to more people. Getting back to first principles and not thinking by analogy has become a motto for me.
Read more
4 people found this helpful
Report abuse

Alister Cryan
5.0 out of 5 stars Thought provoking
Reviewed in the United Kingdom on 19 January 2021
Verified Purchase
Ozan Varol has lived more lives than most in going from being a rocket scientist to a lawyer. In the book he speaks of a book NASA has which enables them to learn the lessons of past mistakes and in doing so provides a painting within a painting of this book. It's not because it's the only book I have read this year that it is the best book I have read this year because the bar has now been set very high for any other writers.
Read more
One person found this helpful
Report abuse

Dennis Farcinsen Leth
5.0 out of 5 stars Great book.
Reviewed in the United Kingdom on 3 September 2020
Verified Purchase
As an entrepreneur and creative person I have been following Ozan Varol for a couple of years. His weekly newsmail is one of the few newsmail I actually read.

This book is about creativity, thinking, strategizing, testing and learning. It's well written and with great example from the history of Nasa and SpaceX. Along with good examples from Ozans work on the Mars Rovers.

If you want to move the boundaries of the world. This book is worthy your time.
Read more
One person found this helpful
Report abuse
See all reviews

Ozan Varol is a rocket scientist, award-winning law professor, and author of non-fiction books. A native of Istanbul, Turkey, Ozan grew up in a family of no English speakers. He moved to the United States by himself at 17 to attend Cornell University and major in planetary sciences. While there, he served on the operations team for the 2003 Mars Exploration Rovers project that sent two rovers to Mars. He later became a law professor to influence others to make interplanetary leaps on this planet. He has written numerous award-winning articles that are taught in colleges and graduate schools. His work has been featured in domestic and foreign media, including BBC, TIME, CNN, Washington Post, Slate, and Foreign Policy. He writes about contrarian thinking at http://ozanvarol.com.