<![endif]--> Skip to main content
Three Men in a Boat and over 2 million other books are available for Amazon Kindle . Learn more
Share 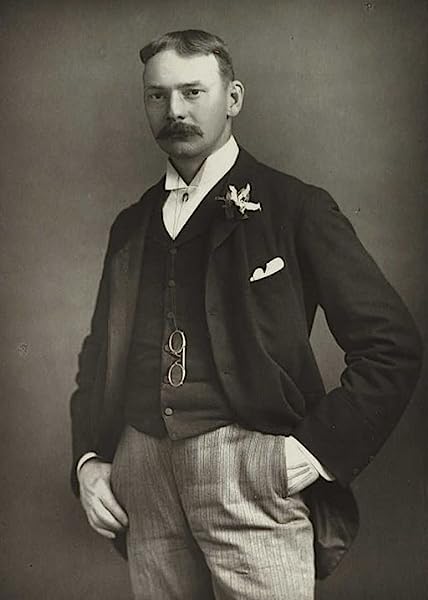 Jerome Klapka Jerome (1859 1927) was an English writer and humorist, best known for the humorous travelogue Three Men in a Boat. Jerome was born in Caldmore, Walsall, England, and was brought up in poverty in London. He attended St Marylebone Grammar School. Other works include the essay collections Idle Thoughts of an Idle Fellow and Second Thoughts of an Idle Fellow; Three Men on the Bummel, a sequel to Three Men in a Boat; and several other novels. In 1877, inspired by his older sister Blandina's love for the theatre, Jerome decided to try his hand at acting, under the stage name Harold Crichton. He joined a repertory troupe that produced plays on a shoestring budget, often drawing on the actors' own meagre resources Jerome was penniless at the time to purchase costumes and props. After three years on the road and with no evident success, the 21-year-old Jerome decided he had had enough with stage life, and sought other occupations. He tried to become a journalist, writing essays, satires and short stories, but most of these were rejected. Over the next few years he was a school teacher, a packer, and a solicitor's clerk. Finally, in 1885, he had some success with On the Stage and Off, a comic memoir of his experiences with the acting troupe. Idle Thoughts of an Idle Fellow, a collection of humorous essays, followed in 1886 (see 1885 and 1886 in literature). On 21 June 1888, Jerome married Georgina Elizabeth Henrietta Stanley Marris (a.k.a. Ettie), nine days after she had divorced her first husband. She had a daughter from her previous, five-year marriage, nicknamed Elsie (her actual name was also Georgina). The honeymoon took place on the Thames "in a little boat," a fact which was to have a significant influence on his next, and most important work, Three Men in a Boat.

Start reading Three Men in a Boat on your Kindle in under a minute.

Chiranjeev saimbi
5.0 out of 5 stars Hilarious!!
26 February 2019
Format: PaperbackVerified Purchase
"well," said Harris, reaching his hand out of his glass," we have had a pleasant trip, and my hearty thanks for it to old Father Thames- but I think we did well to chuck it when we did. Here's to Three Men well out of a Boat!"

Plot: Story of three overworked friends who decide to holiday boating from Kingston to Oxford and back to Kingston on the river Thames.
George,Harris and Jerome with their dog hired a boat and started their two week journey in which they faced numerous incidents which were challenging but hilarious and breath taking with the sudden disappearance and reappearance of Harris. Their journey in which they exchanged their past experiences,funny incidents of their friends and friends of friends.

My review: There is so much to talk about this book. This book has been ranked #2 in the 50 funniest books ever written. All 4 characters and their attitude is so relatable and are so wonderfully narrated.
It's part comic and part travelogue, which is full of funny stories. Anecdotes in the book are so akin that you may imagine yourself in that particular situation and end up laughing multiple times in a day. Story line is very simple but very intriguing because of the small stories that they exchanged from time to time.
One of the best moment is hypothetical conversation between their dog and a stray cat.
Few highlights from the book which I found very hilarious.
Chapter 3. Uncle Podger tries to put picture on the wall.
Chapter 5. The unreliable weather forecasts.
Chapter 8. When Harris sings a comic song and when 2 young men fooled everybody in a high class party.
Chapter 10. George and Harris got entangled in the canvas and struggles for freedom.
Chapter 13. Sudden and strange disappearance of Harris and a pie .
A hypothetical conversation of their dog and a stray cat.
Chapter 17. Trout story by George and Harris.
All I can say is that..just go for this book. You will enjoy it, cherish it and surprise yourself thinking there are books like these which exist too.
5/5

Sidh Goyal
5.0 out of 5 stars Classics mean old, not rusty!
14 September 2017
Format: PaperbackVerified Purchase
Well I read this book because it was part of my school syllabus. But that doesn't mean that I didn't read it without any interest. I couldn't help but be interested in this smashing novel. It's got a tinge of nice old nostalgic era of the 20th century but that is simply no reason to let you down. It's great book full of comedy. There are hits where it gets a little boring because of historical descriptions about some locations. You might need to sit with a dictionary because there are a lot of words that aren't used much in the modern day. But it's immensely fun to read this book. A happy start (although the characters are an awful lot unorganised) and a happy ending. And don't forget the dog. It's all about the dog...
Read more
5 people found this helpful
Helpful
Comment Report abuse

Books Charming
3.0 out of 5 stars Value for money
16 October 2019
Format: PaperbackVerified Purchase
It is based on a boat trip taken by three men and a dog. The plot sets in England and the author used different tales of history to make the book more exciting. The version I read has some spelling mistakes. Overall, it is a fast-paced novel where the experiences they had are worth reading.
Read more

S Bhattacharjee
5.0 out of 5 stars Hysterical (in the right way)
28 October 2017
Format: PaperbackVerified Purchase
Having read an abridged version of the novel as a school student, and nearly falling off the bed and other surfaces due to hysterical laughter, it was always my intention to purchase the unabridged book. And this was the perfect edition. As hilarious as ever. I can read this over and over and find new things to be hysterical about.
Read more
3 people found this helpful
Helpful
Comment Report abuse

Sharon C
3.0 out of 5 stars Not a bad book but the print is small
10 January 2014
Format: PaperbackVerified Purchase
I studied "Uncle Podger Hangs a Picture" when I was a kid in school and always wanted to read this book as I've known it to be funny. The writer has a distinctive style and I found his description very vivid and humorous. However, at times, just reading about England (when you have no clue about the history and the places, left me occasionally stumped - surely an English lit. student would not feel that way, I bet) but I had a good laugh several times.

I gave the book 3 stars not for the writer but for these reasons: The paper quality is not bad for Rs. 66, however, the print (font) is extremely small and tiring for my eyes, hence I recommend paying more and ordering a bigger version of the same book (diff. publisher) although I was pleasantly surprised this book by Rupa Classics included illustrations!

This is my first purchase from Amazon India (I've been a proud Amazon US customer for 6+ yrs and recently re-located to India) and was disappointed with the courier service used in Trivandrum (Blue-dart). I had to call Amazon Hyd'bad twice to follow up on my order (the staff was v.polite) and have Blue-dart deliver the book (BD did not call my phone no. when they had issues locating my address for delivery initially) and received my book 5 days later.
Read more
12 people found this helpful
Helpful
Comment Report abuse

B A
5.0 out of 5 stars Must read.
25 July 2017
Format: Kindle EditionVerified Purchase
I was amazed how come I didn't know about this book all these years. What a beautiful and hilarious book! Don't read it in public places! Every page will make you laugh. Must read
Read more
3 people found this helpful
Helpful
Comment Report abuse

Chandra mohan jha
4.0 out of 5 stars Nice one
15 September 2018
Format: PaperbackVerified Purchase
This book is very funny and interesting, Because of it's characters. I didn't read it in my 9th class but now i think it's perfect for teen-agers. So, buy this book for your holiday and enjoy.
Read more

dil3844
4.0 out of 5 stars hilarious comedy
8 March 2018
Format: PaperbackVerified Purchase
The book is fantastic with very good humour. I read few chapters during a journey and people around thought I was crazy as I was laughing a lot so, I advise to read it, when alone. Its definitely worth reading to have a good laugh. The only con is the font and word spacing is less.
Read more
One person found this helpful
Helpful
Comment Report abuse
There are 184 customer reviews and 221 customer ratings.
See all 184 customer reviews
Write a product review

Go to Amazon.com to see all 413 reviews 3.8 out of 5 stars
Pages with related products. See and discover other items: classics books
Unlimited FREE fast delivery, video streaming & more
Prime members enjoy unlimited free, fast delivery on eligible items, video streaming, ad-free music, exclusive access to deals & more.
> Get started
Back to top
Get to Know Us
Connect with Us
Make Money with Us
Let Us Help You
EnglishChoose a language for shopping.
© 1996-2020, Amazon.com, Inc. or its affiliates