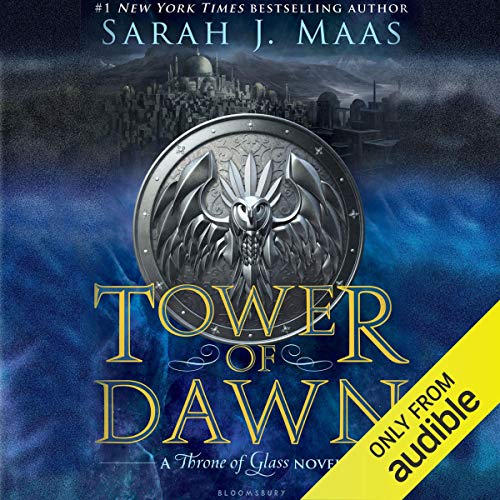 Tower of Dawn: A Throne of Glass Novel

By completing your purchase you agree to Audible’s Conditions Of Use Amazon's Privacy Notice.
Sold and delivered by Audible, an Amazon company
Share
Helpful
Report abuse

About this product, the book got perfectly delivered to me. So no complaints at all.

Navneet
5.0 out of 5 stars It Was Okay
Reviewed in India on 6 December 2020
Verified Purchase
I found this book very boring as it was about Chaol Westfall and he is very boring. But all the other books in the series were amazing . But if you are reading this book for Nesryn Faliq then go for it.
Read more
Helpful
Report abuse

Amazon Customer
5.0 out of 5 stars Awesome!!
Reviewed in India on 3 November 2018
Verified Purchase
Yrene's a badass in her own way. Chaol and Yrene make one hell of a romance. If you haven't read it yet, you should now. Kingdom of Ash would make sense only if you read tod!
Read more
One person found this helpful
Helpful
Report abuse

Shubhra
4.0 out of 5 stars Good
Reviewed in India on 1 March 2021
Verified Purchase
It was good. Choal could be better presented
Read more
Helpful
Report abuse

Parnita
5.0 out of 5 stars good read
Reviewed in India on 17 October 2018
Verified Purchase
I like chaol better after this
Read more
Helpful
Report abuse
See all reviews

Paul Tapner
5.0 out of 5 stars Meanwhile in the south..
Reviewed in the United Kingdom on 19 September 2017
Verified Purchase
A new novel in the 'Throne of Glass' series of fantasy novels. If you don't know anything about them, go and read book one; 'Throne of Glass'. Because this is not a jumping on point. There is no exposition to bring new readers up to speed.

Regular readers of this series read on. Although do note:

1: This is not book six in the series. This is a story involving other characters from earlier books which takes place at the same time as much of book five.

2: Although books one to four were young adult novels, this, like book five, says on the back CONTAINS MATURE CONTENT. NOT SUITABLE FOR YOUNGER READERS.

This volume runs for six hundred and fifty eight pages. It is divided into two parts. Further into sixty eight chapters. And an epilogue.

There's a map of the setting at the start.

Said setting is the continent to the south of the lands where all the rest of this series takes place. Where Chaol and Nesryn have gone, in order to try and get the leader of this land to help in the fight. Plus to try and heal the injuries that have left Chaol unable to use his legs.

They face intrigue. And Chaol faces the ire of Yrene, a healer who could help him. If she can get past her issues with him.

There are also answers to big questions to be found...

Sarah J. Maas writes excellent prose, which one again really sweeps you into the book from the off. The Chaol chapters early on in particular are excellent in their depiction of him trying to live with his disability.

Everything that follows is firmly character driven, and all that happens comes out of the action and interaction of said characters.

Character relationships are really achingly well done at times, especially early on. But this is a very slow burn of a book, one of those that keeps the threat level firmly in the background while people go about their business. Some of what Chaol and Yrene go on to down is a bit predictable, but well written enough so you won't care about that too much.

Nesryn's story arc is a lot less predictable, and certain things in that do develop very nicely.

As does the eventual main plot. Whilst the developments to the main narrative that come from this may end up being summarised in book six easily enough, this does get very interesting at points. And it does have some good revelations.

There are references to things that happened in book five every so often, so you can parallel it with that.

How essential a read this is will end up being a matter of opinion. But I liked it a lot. Despite it being slightly predictable at times. There's some excellent writing and great character moments, and an interesting and well realised setting also. It is a worthwhile detour in the series, and worth five stars as such.
Read more
22 people found this helpful
Report abuse

K. G. A. Alavi
5.0 out of 5 stars “Nothing is coincidence”
Reviewed in the United Kingdom on 29 September 2017
Verified Purchase
I bow down to Sarah J Maas’ story telling. I have not liked Chaol since the second half of the Crown of Midnight. Also with the last book finishing with Aelin ending in such a precarious position I personally did not want to weight an extra year to find out what happened to her.

However SJM knows best every issue I had with Chaol was address in this book. Also if this book would have come out after the next the final book this story would have had the prequel curse where I would have known everything that was going to happen.

I admit I was thinking about Aelin through this book, so I was glad to see her make appearances (only as mentions throughout). This is a great story tying up threads from former books and novellas. I think the “nothing is coincidence” is featured and shown perfectly in this book.

This is a great story about redemption, character development/growth, using left over bits from the other stories to make a great story, and characters finding their own place. Once again it the it is a great credit to SJM’s storytelling skills that she wrote such a great book essentially just the side characters, and made them shine. Especially Nesryn who definitely deserved better then just being Chaol’s backup (in more ways then one). There is also great description about the mental injury recovery, and how much of the process is mental. Anger, frustration, and guilt can be as detrimental to a person’s recovery as the cause of the physical injury itself.

As much as I hate to admit it these characters would not have had a chance to shine like this if Aelin was in this book. If possible this book has increased my anticipation for the next book even more. I can’t wait for the final book of this great series. I am expecting all out WAR, and one hell of a retribution beat downs to all the Vargs.
Read more
8 people found this helpful
Report abuse

SparklesJD
3.0 out of 5 stars "She could have sworn the other books were more interesting..."
Reviewed in the United Kingdom on 25 November 2017
Verified Purchase
I really enjoyed Maas' other books, but I'm afraid this wasn't up to the usual standard. The action portions are as good as you'd expect and Maas is good at building up the tension in the scary bits, but the characters aren't as interesting as the rest in the series and seem to be mostly defined by their various traumatic back stories. For me this meant that the book struggled to maintain the pace in between the set pieces.

More importantly, for me, some aspects of Maas' writing style are really starting to grate.

'S/he could have sworn [usually something flashing in eyes]...' is one I've started finding particularly irritating. I started noticing it about half way through the 'A Court of Thorns and Roses' series. She must use it at least a dozen times per book now and it sets my teeth on edge and takes me right out of the narrative. I'm not sure why her editor hasn't stepped in (unless I'm the only one who's noticed!). The abrupt, short dramatic statements I can just about live with - although a little of this type of thing goes a long way, I find.
Read more
5 people found this helpful
Report abuse

Dee Healey
5.0 out of 5 stars Another fantastic read from Maas!
Reviewed in the United Kingdom on 18 November 2017
Verified Purchase
Argh it’s too long to wait until we get more of these characters!!

I always loved Chaol even more than Dorian (unpopular opinion I know).
Not that I don’t love Dorian but for me Chaol was helplessly flawed but in all the right ways. Yes there were times when I didn’t particularly like what he’d said or done but let’s be honest most people who have read the ToG series will have thought the same about Aelin at one time or another.
So when I heard that Chaol was getting his own book it was a no-brainer for me to read it and I’m so glad I did because I loved everything about this book!

The character development of Chaol as well as the introduction of some new amazing characters like Yrene and Sartaq was fantastic. It may be cliche but Chaol really goes on a voyage of self-discovery in this book and, IMO, is shown for who he really is; a brave, selfless, caring man who makes mistakes but learns from them.

The word-building and descriptions of the Southern Continent are superb and really makes you feel like you are there (or certainly wish you were).

I think the storyline of ToD complimented EoS really well and linked them together brilliantly, and although ToD does not end on the sort of cliffhanger that EoS did (thank Gods for that!!! Not sure I could have handled another ending like that one) it does lead perfectly to where we left off in EoS.

leanne
5.0 out of 5 stars Delightfully surprised!
Reviewed in the United Kingdom on 15 October 2020
Verified Purchase
I cannot tell you how much I did not want to read this book. I couldn’t wait to move on to Kingdom of Ash, and when I found out I had to read this to understand Kingdom of Ash, I was fuming. Chaol has never been my favourite character. I’ve blown hot and cold with him throughout the series, And I certainly didn’t want to have to read over 600 pages of what he was up to. But I love this book. I love Yrene. Just everything about it. I couldn’t put it down. And though I’m excited to move on to the final book, I’m a little sad to be leaving this book behind. Sarah is most definitely climbing her way up the list to the top of my favourite authors. So if you’re as annoyed as I was to be forced away from the main story, if you’re anything like me, you will be over it pretty quickly.
Read more
One person found this helpful
Report abuse
See all reviews
Back to top
Get to Know Us
Connect with Us
Make Money with Us
Let Us Help You
EnglishChoose a language for shopping.
© 1996-2021, Amazon.com, Inc. or its affiliates