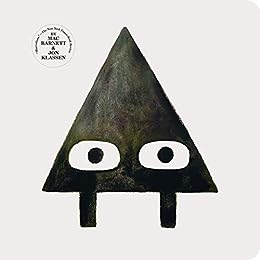 It’s what you would expect from this pairing and then just a touch more genius. If you’re not already aware of their work, we suggest you rectify that immediately. Filled with original storylines, uncomplicated but meaningful text, a discernible humour and instantly recognisable artwork, there’s everything to appreciate about their work.[…] A story with a perfectly simple premise executed to perfection in the only way Barnett and Klassen know how.” ― Picture Books Blogger

“Klassen’s restrained earthy palette and minimalist scenes (those eloquent eyes again), are in perfect harmony with Barnett’s even sparer, deadpan text allowing readers to step into the narrative landscape and fill for themselves, the host of gaps left by the book’s genius creators. Prankish play or something more sinister? I come down on the side of the former. This book is the first of a planned trilogy from this formidable team: I eagerly anticipate the next one … and the next.” ― Red Reading Hub

“The images are deceptively simple; the characters inhabit a world of triangles, squares and the “shapes with no names”. Each is rendered beautifully. As with Klassen’s solo work, the eyes reveal everything about the characters, bring two basic shapes-on-legs to life.” ― Irish Times Weekend

“Brilliant and hilarious, award-winning Jon Klassen and Mac Barnett’s Triangle is the gem of a book.” ― Julia Eccleshare LoveReading, Book of the Month --This text refers to the paperback edition.

Mac Barnett is the author of several picture books, including Chloe and the Lion and Guess Again!, which TIME Magazine named the no. 2 Picture Book of 2010. He also writes the Brixton Brothers series of mysteries. Mac is the founder of the Echo Park Time Travel Mart, a convenience store for time travellers, and serves on the board of 826LA, a not-for-profit writing and tutoring centre in LA. His collaborations with Jon Klassen, Extra Yarn and Sam & Dave Dig a Hole, have both won the Caldecott Honor. He lives in California, USA.

Jon Klassen has created illustrations for popular series The Incorrigible Children of Ashton Place and served as an illustrator on the animated feature film Coraline. His illustrations for Caroline Stutson's Cats Night Out won the Governor General Award in 2010. I Want My Hat Back is the first book he has both written and illustrated. Originally from Niagara Falls, Canada, he lives in Los Angeles, USA. --This text refers to the paperback edition.

4.7 out of 5 stars
4.7 out of 5
722 global ratings
How are ratings calculated?
To calculate the overall star rating and percentage breakdown by star, we don’t use a simple average. Instead, our system considers things like how recent a review is and if the reviewer bought the item on Amazon. It also analyses reviews to verify trustworthiness.
Top reviews

Rosemary Standeven
4.0 out of 5 stars The joy of geometric shapes
Reviewed in the United Kingdom on 25 July 2018
Verified Purchase
I love mathematics – with a particular interest in Shape and Symmetry. So, how could I resist an illustrated book called “Triangle”. Although I am a little older than the target audience of 3 – 7 year olds, I really enjoyed this book, and especially the illustrations.
The main character is an isosceles (yes, of course I measured the sides) triangle, who lives in a triangular house, in an area filled exclusively with triangles of all sizes (but no scalene or right-angle ones). Being a liberal triangle, he has non-triangular friends, in particular one masquerading as a square (actually a rectangle, but I expect most children will not get out their rulers to check). Triangle wants to play a trick on Square. Actually, quite a nasty trick. He plays on Square’s fear of snakes. Square retaliates by making Triangle scared. Was his retaliation planned – or just a fortunate (?) coincidence?
Not really a great lesson for children – how to terrify your friends by using their greatest fear, and validating revenge (deliberate or not). But, on the plus side – they will learn about shapes, and how you cannot get a square through a triangular hole (unless it goes sideways – something for the next lesson).
Read more
2 people found this helpful
Report abuse

Ross Wag
4.0 out of 5 stars Under my head and straight on to my five year old's.
Reviewed in the United Kingdom on 19 March 2017
Verified Purchase
So checking out the one star review here, in some ways it's hard to argue. At face value there isn't a big story here, it's (pardon the pun) fairly two dimensional. Then again, followers of Jon Klassen will be familiar with simplicity. (I Want My Hat Back - Bear loses hat then finds it again, simple, right?). The simplicity feeds the humour.
That said, though I read and review a lot of kids' books, I'm not the target market, my five year old is. The acid test for him is if he asks to read it again straight away, he did. He laughed, he talked about the story and he added what was happening, job done as far as a kids' book goes.
I should add that this is a gorgeous quality book (the first hardback version), it really is a lovely looking book, great to handle.
With Mac Barnett writing the words, he and Jon Kassen really compliment each other. Not quite as quirky and fun as their previous books, Extra Yarn and Sam & Dave Dig A Hole but still very entertaining.
My one gripe and this stands for a lot of this genre of books is that it seems a little over priced. The face value is £12.99, a bit much for a short read.
Read more
7 people found this helpful
Report abuse

L. Hall
5.0 out of 5 stars Charmingly unusual children's story
Reviewed in the United Kingdom on 15 January 2019
Verified Purchase
I ordered this from Amazon after my 2 year old chose it from our public library. He loved the book it seems, and was very happy a few weeks later when I gave him his own copy of it. The test of a good children's book I believe is whether a child wants to re-read and laughs (if appropriate for the story!) My son thinks this story is hilarious. The paperback copy has a lovely feel to it, rounded edges and quality paper. The illustration is unusual and interesting, the story itself doesn't have much to it but as I said my son laughs every time. This has made me look at what other stories this writer/illustrator combo has done
Read more
One person found this helpful
Report abuse

Sarah Tonner
5.0 out of 5 stars Lovely
Reviewed in the United Kingdom on 27 April 2017
Verified Purchase
This book is beautiful and simple (in the best way). I bought it for my 3 year old based on the cover. He has autism and he is obsessed with triangles, they actually calm him down when he's overwhelmed and anxious (he carries triangular shapes around pretty much all the time). Anyway, he's literally spent the past two hours flicking through this book and I've had to read it to him about a dozen times too.
The story is clever, the illustrations are just beautiful and simple and my son hasn't been this chilled out and happy in ages. Thanks!
Read more
5 people found this helpful
Report abuse

TD
5.0 out of 5 stars Would buy again.
Reviewed in the United Kingdom on 22 July 2019
Verified Purchase
Quirky. Delivered on time. Firm matt finish to pages. Great eye expressions on faces. Used with my nursery class when talking about shapes. They thought it was funny - the adults loved it too! Would be suitable for all who love picture books. Need to get the others in the series now!
Read more
Report abuse
See all reviews
Back to top
Get to Know Us
Connect with Us
Make Money with Us
Let Us Help You
EnglishChoose a language for shopping.
© 1996-2021, Amazon.com, Inc. or its affiliates