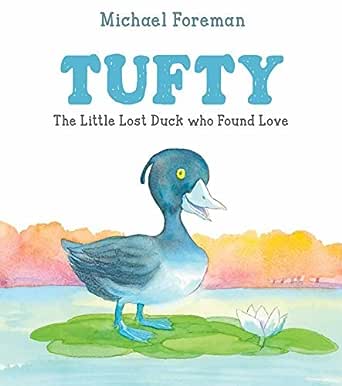 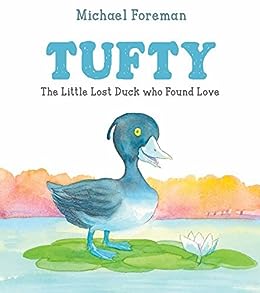 A heart-warming story about a little duck finding his place in the big, wide world, from two times Kate Greenaway Medal Winner, Michael Foreman. --This text refers to an alternate kindle_edition edition.

The miracle of bird migration is told by seasoned British author/illustrator Foreman in this warm, sympathetic story of a young duck who loses his family but gains a mate. Tufty and his tufted siblings grow up on a lake beside a recognizable Buckingham Palace, with the British royal family (somewhat ducklike in appearance) in residence. Humorously dubbed the 'Royal Duck and Duckess, ' the royals feed and care for the ducks, providing entertainment with their grand parties in the royal ballroom, avidly watched through the window by the ducks. On the flight south, Tufty becomes separated from his flock and is taken in by a homeless white man, who cares for him and feeds him throughout the winter until he is ready to rejoin the duck family on their return to the royal lake. In his signature, delicate pencil-and-watercolor style, Foreman deftly portrays the drama of the small, lost duck, hinting at an ecological message when Tufty loses his way flying through a vast urban maze of man-made structures. The plight of the duck and the kindness of the homeless man who rescues him are heartfelt, and the man's cozy camp in a hollow tree beside the lake to which Tufty returns with his eventual mate will have a vicarious appeal for young readers. A satisfying story with the feel of a classic, well told and beautifully illustrated.--Kirkus Reviews

A duckling named Tufty paddles in the lake, trying to keep up with his parents and siblings, while a royal family strolls along the water's edge. But the nights grow colder, and the ducks fly southward. Too tired to continue, little Tufty lands in a park. A man in patched clothes befriends him, sharing his food and his home (a hollow chestnut tree in the woods) with the duckling all winter. In spring, Tufty flies back to the palace lake. But after he finds a mate, they return to the woodland and his kind friend. It's an episodic story for a picture book, but Foreman's captivating pencil-and-watercolor artwork draws the narrative segments together. Washed with delicate, luminous colors, the well-structured drawings record Tufty's adventures against beautiful backdrops. Engaging details include a picture of Tufty bedding down in his friend's hat and the rather birdlike appearance of the royals as they walk beside the lake. With illustrations that show up well from a distance, this is a good choice for reading aloud in the classroom.--Booklist Online

Tufty is a duckling who lives with his family in a lake by a beautiful palace. The Royal Duck and Duckess feed the ducks every day. As summer turns into fall, Father Duck announces that it is time to fly south. The family sets off, but Tufty does not fly as quickly as his siblings. He begins to lag behind and grow tired, and when a storm comes, Tufty is lost and has to stop to rest. He finds shelter in a tunnel and meets a man who shares his food with him. Then the man takes Tufty to his home in the hollow trunk of a tree by a lake, where he remains for the winter. Tufty's family returns in the spring, and he rejoins them, but he does not forget his friend who lives in the tree hollow and gave him a home. Sometimes an accidental change of plans can be serendipitous. Making the best of a difficult situation leads Tufty to find a new friend and even a new home. This simple lesson in problem solving and being open to different solutions is a valuable one for young children. The soft pencil and watercolor illustrations are soothing and cheerful, well suited for young readers vicariously experiencing getting lost and separated from their families. VERDICT This is a gentle book about a common problem and is a suitable addition for most libraries.--School Library Journal

-- "Journal" --This text refers to the hardcover edition.

Michael Foreman is an award-winning author. He has won the Kate Greenaway Medal twice and has been the UK nominee for the Hans Christian Andersen Award twice. His books are published all over the world.

--This text refers to the hardcover edition.
Read more

Amazon Customer
5.0 out of 5 stars Brilliant book
Reviewed in the United Kingdom on 14 February 2020
Verified Purchase
Brilliant book my 2 year old loves this book being read to him and the book was in perfect condition even tho it was an ex library book.
Read more
Report abuse
See all reviews
click to open popover
Unlimited FREE fast delivery, video streaming & more
Prime members enjoy unlimited free, fast delivery on eligible items, video streaming, ad-free music, exclusive access to deals & more.
> Get started
Back to top
Get to Know Us
Connect with Us
Make Money with Us
Let Us Help You
EnglishChoose a language for shopping.
© 1996-2020, Amazon.com, Inc. or its affiliates