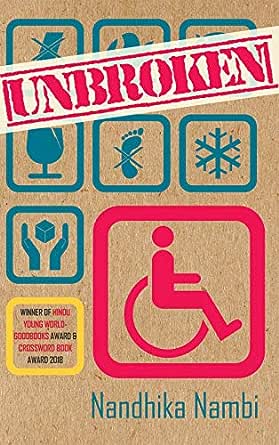 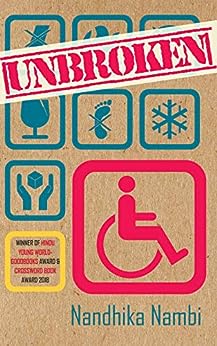 Nandhika Nambi is the middle child in a family of three daughters, which gave her the experience in teenage drama necessary to write this book. She lives in in Coimbatore, where she juggles her diverse passions: medicine, music, manuscripts and munching on food. --This text refers to an alternate kindle_edition edition.

4.4 out of 5 stars
4.4 out of 5
14 global ratings
How are ratings calculated?
To calculate the overall star rating and percentage breakdown by star, we don’t use a simple average. Instead, our system considers things like how recent a review is and if the reviewer bought the item on Amazon. It also analyses reviews to verify trustworthiness.

Vaibhav Ramakrishnan
5.0 out of 5 stars A very insightful and great to read book!
Reviewed in India on 26 April 2017
Verified Purchase
This is a great book! A must buy for those young adults, going through the tough adolescent phase in life. This book has deep insights into the mind of a disabled young girl. The author has done a great job in getting us to empathize with her character even though she seems very unlikable from the outside. The book is very inspirational and is definitely a good read for all age groups.
Read more
3 people found this helpful
Helpful
Comment Report abuse

GS
4.0 out of 5 stars Four Stars
Reviewed in India on 19 July 2018
Verified Purchase
Liked the book print and story too. Well written and simple. Guess the teenagers would relate to it.
Read more
Helpful
Comment Report abuse

Mister_Krrísh
4.0 out of 5 stars Not that much good
Reviewed in India on 4 July 2020
Verified Purchase
A good story but a little boring
Read more
Helpful
Comment Report abuse

Tanu shree
5.0 out of 5 stars And then there are words like, "I kept looking at all these things and ...
Reviewed in India on 23 May 2017
Verified Purchase
Books about disability usually make you root for the protagonist right from the first paragraph. Unbroken is not such a book and Akriti is not your lovable protagonist whom you secretly pray for. She is seething with anger, full of indifference and reeks of insensitivity. And that is why you must read the book.

Being written in first person from Akriti's point of view, it catches the readers by the throat and gives them little time to react or breathe. You can't decide at the outset whether you want to root for her or whack the living daylights out of her. Unbroken is about Akriti's life as it was after being wheelchair bound.

Rarely does one get to read books about disability that do not stir feeling of pity or sympathy. This one forces you to empathise on a different plane. It makes you see anger as a possible natural response. And it is not just Akriti, it is everyone in her life and how they are coping with seeing her close her world to them. And then there are words like, "I kept looking at all these things and wondering why somebody couldn't do anything about them And I realised.. I am somebody."

I know, I know this isn't a review. I never claimed I can write one. But if YA is your thing (and even if it isn't) just read this.
Read more
5 people found this helpful
Helpful
Comment Report abuse

sujata
5.0 out of 5 stars A very unlikely heroine and an inspiring YA read
Reviewed in India on 22 March 2018
I received a review copy from the publishers but the thoughts are my own. Orginally published on my blog.

When I was asked to review Nandhika Nambi’s Unbroken, I jumped at the chance of reading a book from the perspective of a teenager who is in a wheelchair. I had seen how the lives of paraplegics are in the movie Guzaarish and the book Me Before You, but they weren’t narrating their own stories like Akriti does in Unbroken. And I have a soft spot for YA so here I’m. The first person point of view has its limitations but here it is an advantage; we go straight into the heart of the matter. If you are expecting a story where everything works out in the end and Akriti miraculously recovers, then this is not the book for you. Her disability is permanent and she has to find a way to live with it. Akriti is in 11th standard. She is sarcastic and spews out hate on the world unable to come to terms with her condition. She is mean and cruel, especially to people, who are sympathetic to her. She could have been a normal grumpy teenager but the inability to do the simplest of things for herself, and having to depend on others, makes her angry.
"I hated taking people’s help."
Akriti’s life is now divided into a before and after the accident where she lost the use of her legs. Life as she knew it was over. The sooner she accepts the reality and stops dwelling on the past, and focuses on getting the help she needs in the present, the better she will deal with the reality. Unbroken shows that to completely heal, you have to go inward and face your deepest fears and that's easier said than done.

Akriti is completely closed off to the person she was before and takes the people who care for her for granted. To actually care for someone is a painful thing to her, so a great way of avoiding future pain is detaching herself from everything that matters. I can identify with that.

Her Amma is caring and sympathetic to her plight as her caregiver but Akriti thinks she is weak because she has let her get away with bad behavior. Ranjith, her younger brother, is a model son and ever helpful, which infuriates her further. A bit too good to be true if you ask me but there are people like that. Rarely found but they exist. Her father
doesn’t put up with her nonsense and is the only person she is scared of. He doesn’t go easy on her just because she is in a wheelchair.

Akriti hates sticking out like a sore thumb for something which isn’t under her control. She desperately wants to be normal (the way she was before the accident) for the sake of blending in, but this is her new normal.

"I wheeled myself through the corridor. Being alone in a crowded place didn’t bother me; it was the awkward stares that made me punch everybody in the face."

Unbroken deals with such a serious subject matter but it is narrated without a semblance of pity. You try to sympathize with Akriti but she makes it very hard. The narrative voice is such that it is unexpectedly funny in many places when you see the world through her eyes. Sample this -
The only magic I will ever believe in is a woman’s handbag and its endless capacity.

This is a book I felt strongly about but I wanted more. There’s only so much one can fit into a book meant for young adults. I recommend reading it for the unique perspective it offers, and to be aware of the difficulties people living with disability face on a daily basis. I will definitely be keeping an eye out for more books by Nandhika Nambi.
Read more
Helpful
Comment Report abuse

Shreeshail Dayanand
5.0 out of 5 stars Unbroken lets you know that there is a lil' bit of sunshine behind every cloud!
Reviewed in India on 16 June 2017
Not always do you see a protagonist on a wheelchair, and not often is the story told by themselves. Unbroken is about the life of Akriti.....a practical badass who shows no mercy to the people who ruffle her feathers. The book takes us through the life of a girl who lost all the colours of her life after a tragic accident, and how she manages to get through every moment of her life. The book is neat, funny, and is one of the best recommendations for the Young Adult segment readers! Hope to see more books from you Nambi ;-)
-- S.D.
Read more
One person found this helpful
Helpful
Comment Report abuse

Amazon Customer
2.0 out of 5 stars not that good
Reviewed in India on 11 February 2018
Although the plot the storyline was applaudable but i think the author was not able to describe it in a proper way. In order to make the chapter interesting she stretches the plot whinch makes the book super boring. the link is broken every two mins:(
Read more
Helpful
Comment Report abuse

Ruchika
5.0 out of 5 stars Awesome!
Reviewed in India on 1 August 2019
Beautiful, heart touching and moving . Such a simple story and such an inportant lesson. Live fully and love the people who love u while they are around
Read more
Helpful
Comment Report abuse
See all reviews
click to open popover
Unlimited FREE fast delivery, video streaming & more
Prime members enjoy unlimited free, fast delivery on eligible items, video streaming, ad-free music, exclusive access to deals & more.
> Get started
Back to top
Get to Know Us
Connect with Us
Make Money with Us
Let Us Help You
EnglishChoose a language for shopping.
© 1996-2020, Amazon.com, Inc. or its affiliates