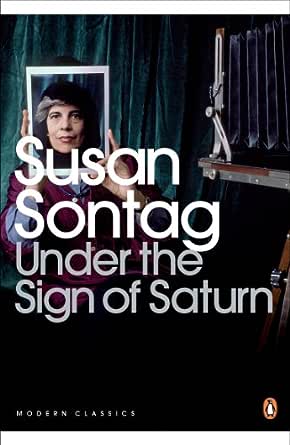 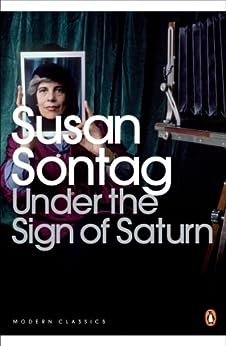 In her most recent collection of essays, "one of America's foremost critics" (Washington Post ) discusses the relationship between moral and esthetic ideas. --This text refers to an out of print or unavailable edition of this title.

“In this collection, Sontag masters all she chooses to survey. She is a noble appreciator. Integrity, wholeness, large-sighted vision are intrinsic to Sontag’s care for the intellectual life....Under the Sign of Saturn includes two long articles that belong together: the famed, polemical, whipping of Leni Riefenstahl’s laundered reputation and camp cult of fascist art, and her stunning analysis of Hans-Jürgen Syberberg’s Hitler, a Film from Germany.... After this feast, I am eager for her thoughts on anything.”—Chicago Sun-Times

“A self-described ‘besotted aesthete’ and ‘obsessed moralist,’ Sontag, more than most writers of her generation, views the everyday business of thinking and feeling as dialectical aspects of one another. Refining that sensibility while attending to the more provocative issues of the day, Sontag has created a body of work of exemplary merit.” —The Boston Globe

“No one has written more passionately about Antonin Artaud....Nor has anyone before Sontag taken the pains to demolish so thoroughly Hitler’s favorite moviemaker, Leni Riefenstahl. This is one of the crack essays in the book.” —Chicago Tribune
--This text refers to an alternate kindle_edition edition.

'After this feast, I am eager for her thoughts on anything' Chicago Sun Times

Susan Sontag's third essay collection brings together her most important critical writing from 1972 to 1980. In these provocative and hugely influential works she explores some of the most controversial artists and thinkers of our time, including her now-famous polemic against Hitler's favourite filmmaker, Leni Riefenstahl, and the cult of fascist art, as well as a dazzling analysis of Hans-Jürgen Syberberg's Hitler, a Film from Germany. There are also highly personal and powerful explorations of death, art, language, history, the imagination and writing itself.

'Sontag, more than most writers of her generation, views the everyday business of thinking and feeling as aspects of one another ... she has created a body of work of exemplary merit' Boston Globe

Susan Sontag (1933-2004) was born in Manhattan and studied at the universities of Chicago, Harvard, and Oxford. She is the author of four novels, a collection of stories, several plays, and six books of essays, among them Against Interpretation and On Photography. Her books are translated into thirty-two languages. In 2001 she was awarded the Jerusalem Prize for the body of her work, and in 2003 she received the Prince of Asturias Prize for Literature and the Peace Prize of the German Book Trade.

In her most recent collection of essays, "one of America's foremost critics" (Washington Post ) discusses the relationship between moral and esthetic ideas. --This text refers to an out of print or unavailable edition of this title.
Read more

4.1 out of 5 stars
4.1 out of 5
9 global ratings
How are ratings calculated?
To calculate the overall star rating and percentage breakdown by star, we don’t use a simple average. Instead, our system considers things like how recent a review is and if the reviewer bought the item on Amazon. It also analyses reviews to verify trustworthiness.

Amazon Customer
1.0 out of 5 stars Just no a fan.
Reviewed in the United States on 22 August 2016
Verified Purchase
Just not a fan.
Read more
Report abuse
See all reviews
click to open popover
Unlimited FREE fast delivery, video streaming & more
Prime members enjoy unlimited free, fast delivery on eligible items, video streaming, ad-free music, exclusive access to deals & more.
> Get started
Back to top
Get to Know Us
Connect with Us
Make Money with Us
Let Us Help You
EnglishChoose a language for shopping.
© 1996-2020, Amazon.com, Inc. or its affiliates