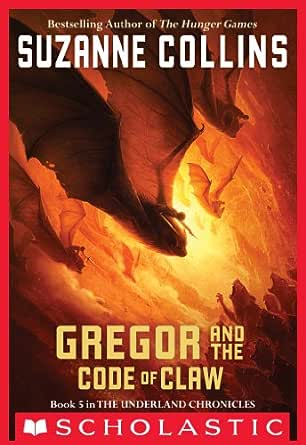 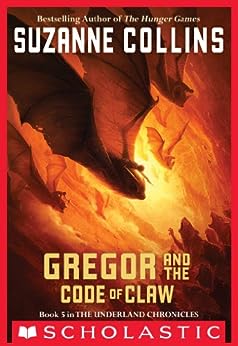 The Underland Chronicles #5: Gregor and the Code of Claw Kindle Edition

Praise for The Underland Chronicles

*"Collins does a grand job of world-building, with a fine economy of words. Unlike Gregor who cannot wait to leave, readers will likely find [the Underland] to be a fantastically engaging place." —Publishers Weekly, starred review

*"[An] exceptional debut novel, a well-written, fast-moving, action-packed fantasy. [S]ure to be a solid hit with young fantasy fans." —Booklist, starred review --This text refers to an alternate kindle_edition edition.

Suzanne Collin's debut novel, Gregor the Overlander, the first book in The Underland Chronicles, received wide praise both in the United States and abroad. The series has been a New York Times bestseller and received numerous accolades. Also a writer for children's television, Suzanne lives with her family in Connecticut. --This text refers to an alternate kindle_edition edition.

4.8 out of 5 stars
4.8 out of 5
803 global ratings
How are ratings calculated?
To calculate the overall star rating and percentage breakdown by star, we don’t use a simple average. Instead, our system considers things like how recent a review is and if the reviewer bought the item on Amazon. It also analyses reviews to verify trustworthiness.

Grahame West
5.0 out of 5 stars Good book
Reviewed in the United Kingdom on 11 May 2020
Verified Purchase
Read the Hunger Games series first & bought this to read more by the same author. To my surprise & pleasingly found this series much better, more inventive and really wanted to see where the series sent. Well worth reading the series in order.
Read more
Report abuse

Zak Old
5.0 out of 5 stars Best Book I've Ever Read
Reviewed in the United Kingdom on 20 February 2018
Verified Purchase
This has been the best series I've ever read! I simply don't know what to do with myself now that I've finished them all. This and code of claw were by far my favourites despite the sad endings. I need a new underland chronicles book. Myh life cannot go one with the fact of unknowing. I promise you if you buy this series you won't regret it. You'll be like me desperate for a sixth book. Please buy this book!
Read more
Report abuse

lynsey nicholas
5.0 out of 5 stars Excellent
Reviewed in the United Kingdom on 22 August 2014
Verified Purchase
I am a thirteen year old girl who loves fantasy and adventure books. I had already read the hunger games and loved them so I decided I should try these. Whilst reading the first book, I just became so interested in it, and found it was so easy, I knew that I would love these books. Since then, I have devoured the series, thinking like the characters, loving all the Gore and war. I would definitely recommend this series to anyone between the age of 8-15, especially for those who loves adventure and a little blood. Trust me, THESE BOOKS ARE AMAZING!!!
Read more
Report abuse
See all reviews
Back to top
Get to Know Us
Connect with Us
Make Money with Us
Let Us Help You
EnglishChoose a language for shopping.
© 1996-2021, Amazon.com, Inc. or its affiliates