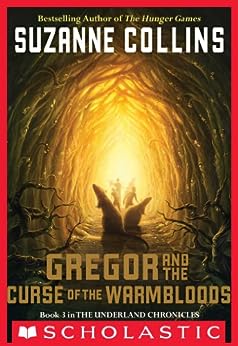 The Underland Chronicles #3: Gregor and the Curse of the Warmbloods Kindle Edition

Kirkus Reviews
June 15, 2005
For the third time, Gregor and his stolid little sister Boots desend to the Underland in fulfillment of a prophecy, in a story that delivers the breakneck adventure and strong characters readers have come to expect. The Curse of the Warmbloods, it turns out, is a terrible plague that threatens every mammal in the Underland. On their perilous journey to a cure, the questing party (which readers will be delighted to find includes the wonderfully caustic rat Ripred), encounters both Luxa, erstwhile, Queen of Regalia, along with her bat Aurora, and Hamnet, Luxa's long-lost uncle, who has fled humankind to escape its warring ways. Collins keeps the plot moving at warp speed and includes just enough background to bring readers up to speed on the multitude of characters and the political rivalries that unite and divide them. This offering takes on an even darker tone than the earlier ones, delving into meaty questions of territorial expansion and its justification. Although no further prophecy is unveiled at the end to explicitly promise another sequel, readers will surely be hoping for one.

Horn Book
June 6, 2005
Just a few months after his previous adventure in Gregor and the Prophecy of Bane ,(rev. 9/04), Gregor,, almost twelve, finds himself deciphering another enigmatic prophecy from the Underland, "a dark war-torn world miles beneath New York City." In this gripping fantasy novel, Gregor and his two-year-old sister Boots embark on their third epic quest in the strange subterranean land, this time to help find a cure for the deadly plague that threatens to wipe out all "warm-bloods"; i.e., mammals. Gregor cares deeply for a number of the Underiand's pale, violet-eyed humans and giant rats and bats, and his mission takes on even more personal urgency when his mother (who, ill-advisedly, has insisted on joining her children in the Underland) is bitten by a plague- infected flea. This immensely readable installment won't disappoint fans of the first two books. In fact, Collins seems to have hit her stride with this page-turner. Character development, plotting, pacing, and description all shine; suspenseful chapter endings propel the story forward to its shocking and sobering conclusion. Battle-weary Gregor and young Boots must leave their mother behind when they return to our world, making the promise of a future visit all the more compelling. K.F.Book Inc.

School Library Journal
July 2005
Gr 4-7-This third book continues the saga of Gregor's adventures in the amazing subterranean world under New York City. This time the 11-year-old is trying to save victims of an Underland plague, including Ares, his giant bat bond-mate, and Gregor's own mother. The quest for the cure takes the boy and his friends into new sections of the Underland where plants are carnivorous and a giant lizard serves as a guide. The Overlander is again joined on his quest by Boots, his toddler sister; Ripred, the rat; and Temp, the giant cockroach. As before, the quest is guided by a prophecy that only becomes clear in the later stages of the book. Collins maintains the momentum, charm, and vivid settings of the original title. The characterizations continue to be complex with each new book, revealing new sides to familiar individuals. Fans of this inventive series and new readers alike will be instantly caught up in the action and will look forward to future installments.-Tasha Saecker, Caestecker Public Library, Green Lake, WI

Booklist. 7/1/05 This third installment of the Underland Chronicles picks up right where Gregor and the Prophecy of BaneG (2004) left off. Eleven-year-old Gregor is busy at
home in Manhattan deciphering the Prophecy of Blood that calls for him and his younger sister, Boots, to return to the Underworld to find the cure for a terrible plague that threatens all of its warm-blooded inhabitants. Gregor's
--This text refers to an out of print or unavailable edition of this title.

Gr. 4-6. This third installment of the Underland Chronicles picks up right where regor and the Prophecy of Bane (2004) left off. Eleven-year-old Gregor is busy at home in Manhattan deciphering the Prophecy of Blood that calls for him and his younger sister, Boots, to return to the Underworld to find the cure for a terrible plague that threatens all its warm-blooded inhabitants. Gregor's adventure is complicated by his mother's refusal to let him leave. She finally relents, but insists on accompanying her children on their mission. When a member of their family is stricken with the plague, Gregor finally begins to understand his role in the prophecy and summons the power he needs to end the horror. The addition of the mother adds a fresh dynamic to the fast-paced, suspenseful story. Fans of the series will enjoy this latest, skillfully told adventure. Ed Sullivan
Copyright © American Library Association. All rights reserved --This text refers to an out of print or unavailable edition of this title.

Suzanne Collin's debut novel, Gregor the Overlander, the first book in Underland Chronicles, received wide praise both in the United States and abroad. All three titles in the series are available on audio from Listening Library. Also a writer for children's television, Suzanne lives with her family in Connecticut. --This text refers to the audioCD edition.
Read more

4.8 out of 5 stars
4.8 out of 5
754 global ratings
How are ratings calculated?
To calculate the overall star rating and percentage breakdown by star, we don’t use a simple average. Instead, our system considers things like how recent a review is and if the reviewer bought the item on Amazon. It also analyses reviews to verify trustworthiness.

HP1983
5.0 out of 5 stars Great series
Reviewed in the United Kingdom on 7 August 2020
Verified Purchase
A great series that on paper you might think wouldn’t work. All the animals / insects that people usually fear/ are averse to are shown in a new light ( Think friendly , loving cockroaches and the loyal bats ) this series follows one boy who thinks himself unimportant, living a sometimes difficult life. As the series develops we see the main character grow in confidence, find and fulfil prophecies ,which are life changing , and ends with his finding himself. A reminder that family comes in all shapes and sizes and that we are defined by our choices in life.
Read more
Report abuse

Grahame West
5.0 out of 5 stars Good inventive story
Reviewed in the United Kingdom on 11 May 2020
Verified Purchase
Read the Hunger Games series first & bought this to read more by the same author. To my surprise & pleasingly found this series much better, more inventive and really wanted to see where the series sent. Well worth reading the series in order.
Read more
Report abuse

An Avid Reader
5.0 out of 5 stars Amazing!
Reviewed in the United Kingdom on 4 April 2015
Verified Purchase
I loved the Hunger Games and was interested to see what other books Suzanne Collins had written. Initially I was put off buying this book as it seemed to be aimed at a much younger audience, however I took a chance and am so pleased that I did! This book was excellent! Beautifully written and I adored the characters of Temp and Boots and the wonderful relationship they shared. This book made me laugh but also kept me up at night as I couldn't wait to find out what happened in the next chapter. I will definitely be reading all the books in this series and can not recommend it enough. Great read for all ages.
Read more
Report abuse

Drogbafan
5.0 out of 5 stars What a Great Read for a 10 Year Old!
Reviewed in the United Kingdom on 8 February 2012
Verified Purchase
I stumbled on the Overland Chronicles by pure chance and decided to read it to my 10 year old son each night before bed. He enjoyed it so much that he took up the book and read it within a few days. He was hooked and has enoyed this chronicle just as much. He has never read very much before and it is just oh so refreshing to find such a well written book which has truly captivated my son from the first to the last word. He has now read all the books in this series and wishes there were more. I would really recommend this book for the author has created a fantasy world full of enthralling characters that many children will adore.
Read more
Report abuse
See all reviews
Back to top
Get to Know Us
Connect with Us
Make Money with Us
Let Us Help You
EnglishChoose a language for shopping.
© 1996-2021, Amazon.com, Inc. or its affiliates