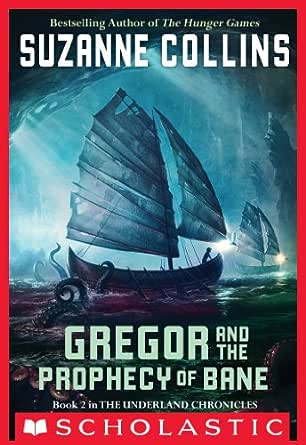 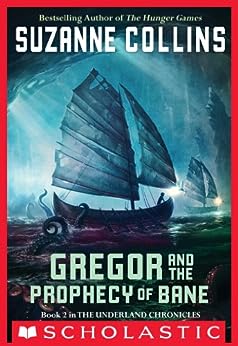 Gr. 4-8. In this exciting, fast-paced sequel to Gregor the Overlander [BKL O 15 03], 11-year-old Gregor and his little sister, Boots, return to the Underland to battle the evil giant rats, which have conspired to kill Boots in order to destroy Gregor, their primary obstacle to conquering all the Underland. To save his sister, Gregor sails across a subterranean sea with his bat and cockroach allies to find and kill the prophesied rat leader of the Underland war. Most of the action takes place on the water, including a memorable battle with a sea serpent, and there are plenty of suspenseful moments and exciting developments. Gregor, of course, is courageous, selfless, and ultimately triumphant. Readers unfamiliar with the first novel will be at a disadvantage; Collins assumes knowledge of the characters and developments from the first book. But fans will not be disappointed with this exciting, action-packed sequel, whose ending suggests more adventures to come. Ed Sullivan
Copyright © American Library Association. All rights reserved --This text refers to an alternate kindle_edition edition.

Suzanne Collins' debut novel, Gregor the Overlander, the first book in The Underland Chronicles, received wide praise both in the United States and abroad. The series has been a New York Times bestseller and received numerous accolades. Also a writer for children's television, Suzanne lives with her family in Connecticut.
--This text refers to an alternate kindle_edition edition.

Praise for The Underland Chronicles

*"Collins does a grand job of world-building, with a fine economy of words. Unlike Gregor who cannot wait to leave, readers will likely find [the Underland] to be a fantastically engaging place." —Publishers Weekly, starred review

*"[An] exceptional debut novel, a well-written, fast-moving, action-packed fantasy. [S]ure to be a solid hit with young fantasy fans." —Booklist, starred review --This text refers to an alternate kindle_edition edition.

4.8 out of 5 stars
4.8 out of 5
763 global ratings
How are ratings calculated?
To calculate the overall star rating and percentage breakdown by star, we don’t use a simple average. Instead, our system considers things like how recent a review is and if the reviewer bought the item on Amazon. It also analyses reviews to verify trustworthiness.

Anant Pandit
5.0 out of 5 stars interesting
Reviewed in India on 30 January 2018
Verified Purchase
Collins shows a another great adventure love it :) the unferland chronicles=gregor and the prophecy of bane just loving it it so great.
Read more
Helpful
Report abuse

Chandrasekhar
5.0 out of 5 stars Very Interesting
Reviewed in India on 5 April 2020
Suzanne Collins is one of my favourite authors. This series, along the Hunger Games are very interesting and exiciting to read.
Read more
Helpful
Report abuse
See all reviews

Grahame West
5.0 out of 5 stars Good continuation from the first book
Reviewed in the United Kingdom on 11 May 2020
Verified Purchase
Read the Hunger Games series first & bought this to read more by the same author. To my surprise & pleasingly found this series much better, more inventive and really wanted to see where the series sent. Well worth reading the series in order.
Read more
Report abuse

Julie
5.0 out of 5 stars Great adventure!
Reviewed in the United Kingdom on 1 June 2018
Verified Purchase
Suzanne Collins has carved a dark and twisty world in which our humble protagonist and his charmingly cute sister are dropped. This series is aimed at a slightly younger audience than the more political Hunger Games, but the quicker plot and clever anthropomorphism make it a great read for all ages. We’re downloading the next one now!
Read more
Report abuse

An Avid Reader
5.0 out of 5 stars Fantastic read!
Reviewed in the United Kingdom on 4 April 2015
Verified Purchase
I loved the Hunger Games and was interested to see what other books Suzanne Collins had written. Initially I was put off buying this book as it seemed to be aimed at a much younger audience, however I took a chance and am so pleased that I did! This book was excellent! Beautifully written and I adored the characters of Temp and Boots and the wonderful relationship they shared. This book made me laugh but also kept me up at night as I couldn't wait to find out what happened in the next chapter. I will definitely be reading all the books in this series and can not recommend it enough. Great read for all ages.
Read more
Report abuse

Mr R W G Ashton
5.0 out of 5 stars Great series, original and addictive
Reviewed in the United Kingdom on 31 July 2019
Verified Purchase
Great read, totally addictive and engaging story. I’ve recently stated reading again after being bought a kindle. And I love a good series. Having already completed Harry Potter and The Hunger Games, this is a fantastic series to keep me entertained.
Read more
Report abuse
See all reviews
click to open popover
Unlimited FREE fast delivery, video streaming & more
Prime members enjoy unlimited free, fast delivery on eligible items, video streaming, ad-free music, exclusive access to deals & more.
> Get started
Back to top
Get to Know Us
Connect with Us
Make Money with Us
Let Us Help You
EnglishChoose a language for shopping.
© 1996-2021, Amazon.com, Inc. or its affiliates