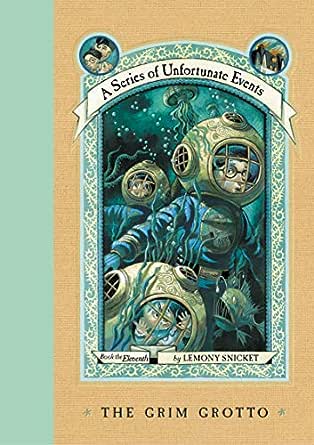 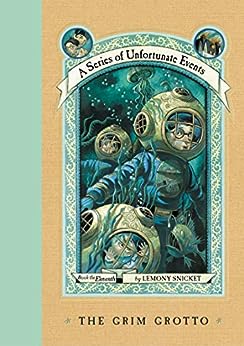 A Series of Unfortunate Events #11: The Grim Grotto Kindle Edition

It's tough when the things that stand between you and your desired sugar bowl are a host of deadly mushrooms and an uncomfortable diving suit. The unlucky Baudelaire orphans find themselves in deep (once again) in this eleventh book in Lemony Snicket's odd-and-full-of-woe-but-quite-funny Series of Unfortunate Events. In The Grim Grotto, the siblings find themselves headed down Stricken Stream on a broken toboggan when they are spotted by the submarine Queequeg, carrying Captain Widdershins, his somewhat volatile stepdaughter Fiona, and optimistic Phil from Lucky Smells Lumbermill. The adventures that follow as the crew tries to get to the aforementioned sugar bowl before Count Olaf are so horrible that the narrator inserts factual information about the water cycle so that readers will get bored and stop reading the book. It doesn't work. As per usual, readers will want to soak up every awf! ul detail and follow the Baudelaires all the way back to the place we first met them--Briny Beach. (Ages 9 and older) --Karin Snelson

An Interview with Lemony Snicket

Lemony Snicket has captured the hearts of childen and adults alike with the hilariously gloomy series that began, of course, with The Bad Beginning. Amazon.com had a chance to question the author of this marvelously morbid and delightfully depressing series, and the communication was grim indeed. Read the cumbersome communique and see for yourself.

A Few Words from Daniel Handler

Due to the world-wide web of conspiracy which surrounds him, Lemony Snicket often communicates with the general public through his representative, Daniel Handler. We were lucky enough to hear from Daniel, and asked him the questions we ask every author, Amazon.com's The Significant Seven


--This text refers to an alternate kindle_edition edition.

Praise for A Series of Unfortunate Events:

“Hilarious. Luckily for fans, the woes of the Baudelaires are far from over.” – Publishers Weekly

Gr. 4-6. With the movie poised for release and a wealth of promotional materials (including editions of the books with disappointing photos on the covers) already available, it wouldn't do to ignore the latest book in A Series of Unfortunate Events. Snicket reconnects with the Baudelaire orphans precisely where he left them, tobogganing down the Stricken Stream, and then sends them down under the waves in a submarine escapade, during which, of course, they encounter the evil Orlof and his cronies. Snicket, who hasn't lost his touch for peculiar, imaginative setups, injects plenty of wry asides and witty vocabulary enrichment. His villains remain deliciously villainous, and the long-suffering Baudelaires still accept struggle without complaint. This time, though, Snicket adds a few characters who don't quite fit the molds, and this is the first book to hint that the unfortunate events that have dogged the kids through 10 previous adventures may be coming to an end. Book the Twelfth will surely provide more clues. Stephanie Zvirin
Copyright © American Library Association. All rights reserved --This text refers to an alternate kindle_edition edition.

Warning: Your day will become very dark - and possibly damp - if you read this book.

Plan to spend this spring in hiding. Lemony Snicket is back with the eleventh book in his New York Times bestselling A Series of Unfortunate Events.

Lemony Snicket's saga about the charming, intelligent and grossly unlucky Baudelaire orphans continues to provoke suspicion and despair in readers the world over. In the eleventh and most alarming volume yet in the bestselling phenomenon A Series of Unfortunate Events, the intrepid siblings delve further into the dark mystery surrounding the death of their parents and the baffling VFD organisation.

If you're reading this review, you are most likely familiar with Lemony Snicket's 10 previous audiobooks chronicling the many misfortunes of the Baudelaire orphans. To be sure, listeners should start from the beginning and savor the whole series. In this eleventh adventure, Violet, Klaus, and Sunny Baudelaire meet up with the crew of the submarine QUEEQUEG in their continued quest to elude Count Olaf, find a missing sugar bowl, and avoid deadly mushrooms. Snicket does not talk down to his intended audience, and the story is filled with clever wordplay and authorial asides. However, there is also a repetitiveness that the audio format may exacerbate, a word which here means that adults may tire of hearing Captain Widdershins say "aye" and "He (or she) who hesitates is lost" over and over and OVER again, even when Tim Curry delivers it in a delightful, completely unselfconscious brogue. And Curry is a delight--both sympathetic to the orphans' plights and worryingly gleeful as the villainous Count Olaf. Lovely CD packaging features atmospheric illustrations by Brett Helquist, and an enhanced CD includes an interactive game of hangman. J.M.D. © AudioFile 2004, Portland, Maine-- Copyright © AudioFile, Portland, Maine --This text refers to an alternate kindle_edition edition.

Lemony Snicket has spent several eras researching the travails of the Baudelaire orphans. During his spare time, he gathers evidence and is considered something of an expert by leading authorities. Lemony Snicket published his first book in 1999 and has not had a good night's sleep since. To his horror and dismay, he has no wife or children, only enemies, associates, and the occasional loyal manservant. Lemony Snicket's extended family, if they were alive, would describe him as a distinguished scholar, an amateur connoisseur, and an outright gentleman. --This text refers to the paperback edition.
Read more

4.8 out of 5 stars
4.8 out of 5
592 global ratings
How are ratings calculated?
To calculate the overall star rating and percentage breakdown by star, we don’t use a simple average. Instead, our system considers things like how recent a review is and if the reviewer bought the item on Amazon. It also analyses reviews to verify trustworthiness.

sarika
5.0 out of 5 stars Best of the series!!!!
Reviewed in India on 7 September 2018
Verified Purchase
It was fascinating! This book is a thriller compared to the 11th one. It introduces a new friend. It has a message from a lost friend, a danergous fungus and the Baudelaires volatile situation.
It is by far the best of this series.

Samarth Sharma
3.0 out of 5 stars Three Stars
Reviewed in India on 13 August 2017
Verified Purchase
Maybe it's the consecutive reading of the last 10 books, but Lemony Snicket gets repetitive after a while.
Read more
Helpful
Report abuse

Shashwat Sharma
2.0 out of 5 stars Ok book
Reviewed in India on 10 April 2018
Verified Purchase
This book is boring at the start,but then gets ok afterwards. The suspense in the 10th book was killing me,so I read it
Read more
Helpful
Report abuse

Amazon Customer
5.0 out of 5 stars Dollar Bills
Reviewed in India on 19 June 2020
Yo, it da dollar giver. Subscribe to.my channel "Dollar Squad."
Anyways, this book is awesome! It's suspenseful and really nice.

B. A. Taylor
5.0 out of 5 stars A good read, I’ve been told
Reviewed in the United Kingdom on 10 August 2020
Verified Purchase
I bought this for a lockdown treat for my granddaughter, who loves this author, she loved it.
It kept her reading during the period away from school, and was another in the set she was collecting, and often read to us over FaceTime.

Rolo
5.0 out of 5 stars I want the whole series
Reviewed in the United Kingdom on 11 July 2018
Verified Purchase
Bought this for my 8yr old grandson (without knowing what it was about) and he couldnt put the book down. Very pleased with my purchase
Read more
Report abuse

Amazon Customer
5.0 out of 5 stars Five Stars
Reviewed in the United Kingdom on 8 March 2017
Verified Purchase
Good service very pleased
Read more
One person found this helpful
Report abuse
See all reviews
Back to top
Get to Know Us
Connect with Us
Make Money with Us
Let Us Help You
EnglishChoose a language for shopping.
© 1996-2021, Amazon.com, Inc. or its affiliates