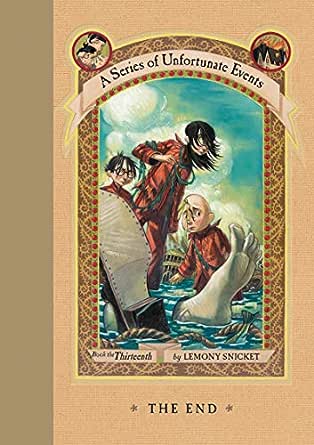 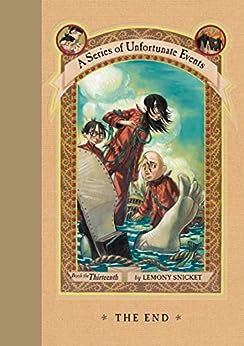 A Series of Unfortunate Events #13: The End Kindle Edition

After a singularly bad beginning, the Baudelaire orphans, Violet, Klaus, and Sunny, have finally reached the end.The question is, will Book the Thirteenth in A Series of Unfortunate Events meet the expectations of the series' myriad fans? Snicket might put it a somewhat different way: if end simply means to cease, the answer is yes. If, however, end means to complete, the answer is most assuredly no--because though Snicket neatly clips numerous threads in the tragic saga, he leaves others literally fluttering in the breeze. As with the previous books, this one begins where its predecessor left off, with the orphans and the villainous Count Olaf afloat on dangerous open seas. When a storm blows their craft ashore, kindly islanders welcome the orphans, but Olaf is an outcast. Have the children finally found the longed-for "last safe place on earth?" Not so fast . . . before long, they are once again scrambling to avert disaster and death ("Kikbucit," as Sunny puts it when a couple of characters are terminated). If possible, this title is even more preposterous than others in the series (the children help an old friend give birth), as well as considerably longer than some. But frequent references to the other adventures will send Snicket fans back to previous books to delight once again in the idiosyncratic characters, the wry humor, and the wordplay, which has surely increased their vocabulary tenfold. Stephanie Zvirin
Copyright © American Library Association. All rights reserved --This text refers to an alternate kindle_edition edition.

Picking up from the final pages of the Pentultimate Peril, this farewell installment to the ridiculously (and deservedly!) popular A Series of Unfortunate Events places our protagonists right where we last left them: on a large, wooden boat in the middle of the ocean, trapped with their nemesis Count Olaf, who has armed himself with a helmet-full of deadly Medusoid Mycelium.

The situation quickly and--this being the Baudelaires--predictably deteriorates. Violet, Klaus, and Sunny find themselves tossed in a storm so terrible that our beloved narrator spends four pages describing how he cannot describe it. From this point on, fans of the series' smarty-pants wordplay and acrobatic narrative can rest assured that they're in for more of the same (and how) in this 368-page finale, and Daniel Handler's deadpan Snicket continues to tutor a generation in self-referential humor (including one particularly funny bit regarding three very short men carrying a large, flat piece of wood, painted to look like a living room). Snicket notes, of course, that if you read the entire series, "your only reward will be 170 chapters of misery in your library and countless tears in your eyes."

There's one big question, though, for anyone who's made it through "the thirteenth chapter of the thirteenth volume in this sad history": is the final book a fitting end? That question is probably best-answered by one of The End's most oft-repeated phrases: It depends on how you look at it. Those looking for conclusive resolution to the series' many, many mysteries may be disappointed, although some big questions do get explicit answers. Not surprisingly for a work so deliberately labyrinthine, though, even the absence of an answer can be sort of an answer--and reaction to The End can be something of a Rorschach test for readers. Or, as Lemony Snicket says, "Perhaps you don’t know yet what the end really means." --Paul Hughes --This text refers to an alternate kindle_edition edition.

Praise for A Series of Unfortunate Events:

“Hilarious. Luckily for fans, the woes of the Baudelaires are far from over.” – Publishers Weekly

I also shouldn't mention the features of the interactive CD, which include:

It has been my solemn occupation to complete the history of the Baudelaire orphans, and at last I am finished. You likely have some other occupation, so if I were you I would drop this audiobook at once, so the end does not finish you.

Lemony Snicket had an unusual education which may or may not explain his ability to evade capture. He is the author of the 13 volumes in A Series of Unfortunate Events, several picture books including The Dark, and the books collectively titled All The Wrong Questions.

Tim Curry has portrayed many memorable characters, most notably the role of the scientist in the Broadway and film versions of The Rocky Horror Picture Show, and Arthur in the Broadway production of SPAMalot.

From THE BAD BEGINNING to The End, Lemony Snicket has consistently suggested that we avoid the saga of the unbelievably unhappy and unfortunate lives of the Baudelaire children. His deliciously downbeat introduction is full of dire warnings that ensure that children, attracted to things they are warned against, will tune in. The incomparable Tim Curry resumes his role as narrator of this gothic serial. His matter-of-fact delivery lends credibility to the unbelievable assortment of disasters that befall the Baudelaires. His transition from narrator to character is seamless, breathing life into each person. Musical interludes, provided by the Gothic Archies, enhance the atmosphere. But don't expect answers to all your questions, for The End of the Baudelaires' story is simply the beginning of another's! N.E.M. © AudioFile 2007, Portland, Maine-- Copyright © AudioFile, Portland, Maine --This text refers to an alternate kindle_edition edition.
Read more

4.8 out of 5 stars
4.8 out of 5
891 global ratings
How are ratings calculated?
To calculate the overall star rating and percentage breakdown by star, we don’t use a simple average. Instead, our system considers things like how recent a review is and if the reviewer bought the item on Amazon. It also analyses reviews to verify trustworthiness.

Amazon Customer
5.0 out of 5 stars The end is here
Reviewed in India on 29 October 2018
Verified Purchase
This book is a fantastic ending to the Violet, Klaus, and Sunnys story.It was not as sad and miserable story that waas discribed.There a a happy ending in the end.
Read more
Helpful
Report abuse

Sam
1.0 out of 5 stars Horrible product
Reviewed in India on 3 January 2021
Verified Purchase
The novel is amazing ... but the cover is so damaged. The ends are frayed and there is an oil stain in the front. Really disappointed.
Read more
Helpful
Report abuse

Gautham Seshadri
5.0 out of 5 stars vfd island
Reviewed in India on 2 August 2020
klaus violet and sunny baudelaire were with ishmael and kit snicket in vfd island where kit snicket was pregnant and a baby called beatrice baudelaire the second when all the people in the island went out as it was opening day and al
lthe people were infected with mydosoid mycelium the people were looking for the anti dote when the incredibly deady viper came with the antidot created by the baudelaire parents they had created the formula that they added in an apple
Read more
Helpful
Report abuse
See all reviews

B. A. Taylor
5.0 out of 5 stars An excellent read
Reviewed in the United Kingdom on 10 August 2020
Verified Purchase
I bought this for a lockdown treat for my granddaughter, who loves this author, she loved it.
It kept her reading during the period away from school, and was another in the set she was collecting, and often read to us over FaceTime.
Read more
4 people found this helpful
Report abuse

CobWeb
5.0 out of 5 stars The End?
Reviewed in the United Kingdom on 27 November 2020
Verified Purchase
'The last volume of the fabulously popular A Series of Unfortunate Events series, in which the history of the Baudelaire orphans is brought to its end.

This book is the last in A Series of Unfortunate Events, and even if you braved the previous twelve volumes, you probably can't stand such unpleasantries as a fearsome storm, a suspicious beverage, a herd of wild sheep, an enormous bird cage, and a truly haunting secret about the Baudelaire parents.

It has been my solemn occupation to complete the history of the Baudelaire orphans, and at last I am finished. You likely have some other occupation, so if I were you I would drop this book at once, so the end does not finish you.

Heather Medium Cat Flockton
5.0 out of 5 stars Brilliant end to a brilliant series
Reviewed in the United Kingdom on 29 November 2020
Verified Purchase
I started reading this series when it was first released and I’ve only just got around to finishing it. I have to say that I thoroughly enjoyed it. I always liked how much it taught and excited about the many experiences and facts one could learn in their lifetime. I preferred it to many other children’s books because it was about real things, about how to be capable and do things for yourself without grown ups.
Without spoiling it, I think the ending is wonderfully honest.
Read more
Report abuse

ELENI PAN
5.0 out of 5 stars The best series ever
Reviewed in the United Kingdom on 22 October 2020
Verified Purchase
This was an amazing storyline. I loved the adventure, comedy and sorrow. I am still confused on certain things but overall it was the best!! I also learned from this tht to always trrut your aunt's suggesions and judgments and you may have a wonderfull book to read (speaking from experience here) XD
Read more
Report abuse

Nicola Jenkins
5.0 out of 5 stars Great series
Reviewed in the United Kingdom on 27 March 2021
Verified Purchase
My son loves these books
Read more
Report abuse
See all reviews
Back to top
Get to Know Us
Connect with Us
Make Money with Us
Let Us Help You
EnglishChoose a language for shopping.
© 1996-2021, Amazon.com, Inc. or its affiliates