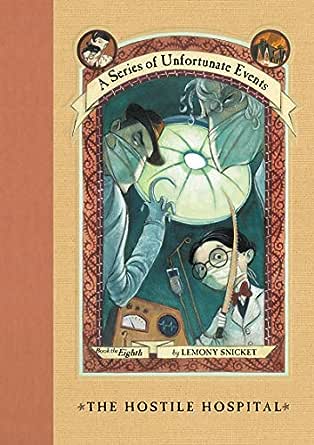 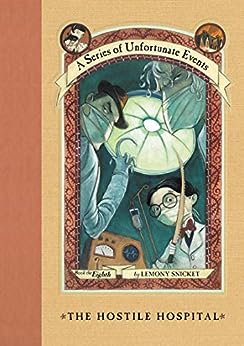 A Series of Unfortunate Events #8: The Hostile Hospital Kindle Edition

As you might expect, nothing but woe befalls the unlucky Baudelaire orphans in the eighth grim tale in Lemony Snicket's Series of Unfortunate Events that began with The Bad Beginning. Ever since the orphans' photographs were plastered across the front page of The Daily Punctilio in an article falsely accusing them of murder, they have been on the run. Only when they disguise themselves as cheerful hospital volunteers (Volunteers Fighting Disease, to be exact), do they see a possible refuge. Of course, this backfires hideously. Where is their ineffectual guardian, Mr. Poe, when they need him most? Will the evil, greedy Count Olaf be successful in giving poor Violet a cranioectomy at the Heimlich Hospital? Is a heart-shaped balloon really better than water for a thirsty patient? Is no news really good news? As ever, Snicket refuses to comfort young readers with cozy answers and satisfying escapes. And, as ever, there are plenty of rusty blades and horrible plot twists to make us shudder and shameless-but-hilarious wordplay to make us grimace happily. Bring on the next one! (Ages 9 and older) --Karin Snelson --This text refers to an alternate kindle_edition edition.

Gr. 4-6. The Baudelaire orphans squeak through another darkly amusing, nightmarish adventure in the eighth of the projected 13 volumes of A Series of Unfortunate Events. In this episode, the children try to learn more about their situation, their parents, and the mysterious Jacques Snicket while being pursued by Count Olaf and his nefarious cohorts, who topple file cabinets to flatten the kids, threaten to cut off anesthetized Violet's head, and trap the children in a burning building. Though the children escape, they are last seen in the trunk of Count Olaf's car, hurtling toward whatever destiny awaits in volume nine. Narrator Snicket is in fine form here, telling the siblings' story while dropping hints about his own dark past and offering entertaining asides, miscellaneous information, and at least one admirable pun. Perfectly capturing the atmosphere of the stories, Helquist's stylized pencil sketches are among his best yet. Carolyn Phelan
Copyright © American Library Association. All rights reserved --This text refers to an alternate kindle_edition edition.

The Baudelaires need a safe place to stay - somewhere far away from terrible villains and local police. A quiet refuge where misfortune never visits. Might Heimlich Hospital be just the place? In Lemony Snicket′s eighth ghastly instalment in A Series of Unfortunate Events, I′m sorry to say that the Baudelaire Orphans will spend time in a hospital where they risk encountering a misleading newspaper headline, unnecessary surgery, an intercom system, anesthesia, heart-shaped balloons, and some very startling news about a fire.

Potential disaster lurks around every corner in this continuation of the always hilarious, often scary saga of the four Baudelaire children. This time the hugely popular series takes the children to the Heimlich Hospital, from which they must escape. Tim Curry is in his element performing Lemony Snicket. He offers abundant vocal impersonations, including real-sounding children; the excitement of squeaks, screams, and groans; and then, soothingly, a clear, warm narrative voice. Ideal for children and parents with imagination and a sense of the absurd. A.C.S. © AudioFile 2002, Portland, Maine-- Copyright © AudioFile, Portland, Maine --This text refers to an alternate kindle_edition edition.

Lemony Snicket was born before you were and is likely to die before you as well. He was born in a small town where the inhabitants were suspicious and prone to riot. He grew up near the sea and currently lives beneath it. Until recently, he was living somewhere else. Mr Snicket first received his education from public schools and private tutors, and then vice versa. Early in life, he learned to reupholster furniture, a skill that turned out to be far more important than anyone imagined. He has been hailed as a brilliant scholar, discredited as a brilliant fraud and mistaken for a much taller man on several occasions. A studied expert in rhetorical analysis, Mr Snicket has spent the last several eras researching the travails of the Baudelaire orphans. During his spare time, he gathers evidence and is considered something of an expert by leading authorities. Recently, he had to give up his hobbies due to laws regarding musical performances in mountainous terrain. Lemony Snicket published his first book in 1999 and has not had a good night's sleep since. Mr Snicket is the author of quite a few books, all dreadful, and has been falsely accused of many crimes, all falsely. Once the recipient of several distinguished rewards, he is now an escapee of several indistinguishable prisons. He is widely regarded as one of the most difficult children's authors to capture and imprison. There are thirteen books in the A Series of Unfortunate Events, which should be avoided at all costs. To his horror and dismay, he has no wife or children, only enemies, associates, and the occasional loyal manservant. Lemony Snicket's extended family, if they were alive, would describe him as a distinguished scholar, an amateur connoisseur, and an outright gentleman. Unfortunately this description has been challenged of late, but Egmont Publishing continues to support his research and writing on the lives of the Baudelaire orphans. As he continues with his investigation, interest in the Baudelaire case has increased. So has his horror. Until recently, he was presumed to be 'presumed dead'. Instead, this 'presumed' presumption wasn't disproved not to be incorrect. Most things written about him are not true, but this is.

4.8 out of 5 stars
4.8 out of 5
437 global ratings
How are ratings calculated?
To calculate the overall star rating and percentage breakdown by star, we don’t use a simple average. Instead, our system considers things like how recent a review is and if the reviewer bought the item on Amazon. It also analyses reviews to verify trustworthiness.

Atharva
5.0 out of 5 stars In search of VFD mystery...
Reviewed in India on 4 November 2017
Verified Purchase
Here the Baudelaire orphans end up in Heimlich hospital following another VFD intiials. Again their fate end up cutting their own sister's head (but are saved ..)

Hasmeeth S Uppal
1.0 out of 5 stars Abracadabra
Reviewed in India on 4 June 2017
Verified Purchase
About it was the one I sent a message on the call of duty to the next part of the choir.
Read more
Helpful
Report abuse
See all reviews

B. A. Taylor
5.0 out of 5 stars A lockdown favourite
Reviewed in the United Kingdom on 10 August 2020
Verified Purchase
I bought this for a lockdown treat for my granddaughter, who loves this author, she loved it.
It kept her reading during the period away from school, and was another in the set she was collecting, and often read to us over FaceTime.
Read more
2 people found this helpful
Report abuse

buzzer
4.0 out of 5 stars Good
Reviewed in the United Kingdom on 20 January 2020
Verified Purchase
Good
Read more
Report abuse
See all reviews
Back to top
Get to Know Us
Connect with Us
Make Money with Us
Let Us Help You
EnglishChoose a language for shopping.
© 1996-2021, Amazon.com, Inc. or its affiliates