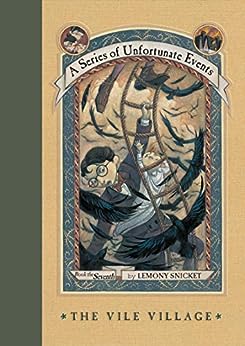 A Series of Unfortunate Events #7: The Vile Village Kindle Edition

The seventh book in Lemony Snicket's splendidly gloomy Series of Unfortunate Events shadows the three Baudelaire orphans as they plummet headlong into their next misadventure. Mr. Poe, their ineffective legal guardian, having exhausted all options for finding them a new home with relatives (including their 19th cousin), sadly entrusts his young charges' fate to a progressive guardian program formed with the premise "It takes a village to raise a child." Before they know it, the Baudelaires are being whisked off on a bus to a village (vile) named "V.F.D." Snicket fans who read The Austere Academy and The Ersatz Elevator will jump to see these three initials, as they provide a clue to the tragic disappearance of the Baudelaires' friends, the beloved, equally orphaned Quagmire triplets.

To the orphans' dismay, V.F.D. is covered in crows--so much so that the whole village is pitch-black and trembling. "The crows weren't squawking or cawing, which is what crows often do, or playing the trumpet, which crows practically never do, but the town was far from silent. The air was filled with the sounds the crows made as they moved around." Another disturbing element of the town is that the Council of Elders (who wear creepy crow hats) has thousands of rules, such as "don't hurt crows" and "don't build mechanical devices." Fortunately, the Baudelaires are taken in by a kindly handyman named Hector who cooks them delicious Mexican food and secretly breaks rules. Still, neither Hector nor an entire village can protect the orphans from the clutches of the money-grubbing Count Olaf, who has relentlessly pursued them (actually, just their fortune) since The Bad Beginning. Fans won't want to miss any of this marvelously morbid series! (Ages 9 and older) --Karin Snelson --This text refers to an alternate kindle_edition edition.

Lemony Snicket had an unusual education which may or may not explain his ability to evade capture. He is the author of the 13 volumes in A Series of Unfortunate Events, several picture books including The Dark, and the books collectively titled All The Wrong Questions.

Brett Helquist's celebrated art has graced books from the charming Bedtime for Bear, which he also wrote, to the New York Times–bestselling A Series of Unfortunate Events by Lemony Snicket to the glorious picture book adaptation of Charles Dickens's A Christmas Carol. He lives with his family in Brooklyn, New York.

Michael Kupperman has done many illustrations for such publications as Fortune, The New Yorker, and The New York Times. He frequently writes scripts for DC Comics. This is his first book. --This text refers to an alternate kindle_edition edition.

As the Baudelaire children hike across the flat dusty terrain leading to the village where they will soon live, they can't help but wonder what lies ahead. Could this be the place where they might finally be happy?

Violet, who is an inventor, might be happy if she gets a chance to do some inventing. Of course, it would be less enjoyable if her invention was desperately needed to escape danger. Her brother, Klaus, loves to read, and might be happy if the town has some books. Though he would not like them as much if he had to stay up all night reading in search of an urgent piece of information. Their baby sister, Sunny, likes to bite things and might be happy if she finds something to sink her teethinto. However, it would be less fun if her teeth got her into big trouble.

Whether their stay in the village will bring the children happiness is a mystery. But as the Baudelaires trudge on toward the hazy town in the distance, they can only hope that what awaits them there isn't the most miserable in a series of unfortunate events.

In this seventh installment of the Series of Unfortunate Events, the orphaned Baudelaire children find themselves shuttled into another hostile en-vironment, still plagued by the greedy yet incompetent Count Olaf. Tim Curry gives distinct character vocalizations without compromising the rich undertones of his voice. He keeps the tongue-in-cheek humor and mockery of this children's series refreshing rather than redundant. Curry reads the backstory from previous books clearly, so a listener unfamiliar with the earlier novels may understand this one. The morose guitar music and lyrics played by the Gothic Archies during tape transition add a finishing touch to a wholly enjoyable listening experience. J.M.P. © AudioFile 2002, Portland, Maine-- Copyright © AudioFile, Portland, Maine --This text refers to an alternate kindle_edition edition.

Gr. 3-6. The Ersatz Elevator , "Book the Sixth," in A Series of Unfortunate Events, opens with the hapless Baudelaire orphans, Violet, Klaus, and Sunny, climbing up very dark stairs to the penthouse, the home of their new guardians, Mr and Mrs. Squalor. Genial Mr. Squalor seems genuinely delighted to have the children. Mrs. Squalor is a different matter: her life is ruled by "what's in" (aqueous martinis, pinstripe suits, and orphans) and "what's out" (alcoholic martinis, light, and elevators). Mr. Squalor's life is ruled by Mrs. Squalor. Children will enjoy the humorous barbs aimed at Mrs. Squalor and her ilk. The plot thickens with the reappearance of the nefarious Count Olaf, first in disguise to do his dastardly deeds and then unmasked to sneer at the Baudelaires. "Book the Seventh," The Vile Village , pokes wicked fun at the saying "It takes a village to raise a child" and at aphorisms in general: "The quoting of an aphorism, like the angry barking or a dog or the smell of overcooked broccoli, rarely indicates that something helpful is about to happen." Sure enough, the Baudelaires are soon adopted by an entire town whose inhabitants look upon the orphans as free labor. The Baudelaires struggle to solve the riddling messages that could lead them to rescue the Quagmire triplets, while trying to avoid being burned at the stake. Series fans will enjoy the quick pace, entertaining authorial asides, and over-the-top characterizations, and Brett Helquist's droll pencil drawings will add to their reading pleasure. Carolyn Phelan
Copyright © American Library Association. All rights reserved --This text refers to an alternate kindle_edition edition.

Lemony Snicket goes from strength to strength and the latest in "A Series of Unfortunate Events" sees our hero up to tricks bigger and better than ever. "The Vile Village" of the title is a place you don't want to be, with Snicket getting darker than ever. The Baudelaire orphans go to a village called V.F.D. as part of a Village Adoption Scheme, and they get into a series of scrapes. With all the usual Snicket devices in place, fans are bound not to be disappointed. --This text refers to an alternate kindle_edition edition.
Read more

4.8 out of 5 stars
4.8 out of 5
535 global ratings
How are ratings calculated?
To calculate the overall star rating and percentage breakdown by star, we don’t use a simple average. Instead, our system considers things like how recent a review is and if the reviewer bought the item on Amazon. It also analyses reviews to verify trustworthiness.
Top reviews

Atharva
5.0 out of 5 stars No respite for the orphans in VFD
Reviewed in India on 4 November 2017
Verified Purchase
The Baudelaire orphans go to a village known as VFD where they are going to be taken care of ...in a hope that all their mysteries would be solved...but alas ..they end up cleaning the village and crow poo !! At the end, orphans end up in prison on the accusation of killing Count Olaf !

Amazon Customer
5.0 out of 5 stars Children are crazy..
Reviewed in India on 28 October 2017
Lemony Snicket controlls all reading minds of children and how well their mind works on the stories of Violet,Klaus,and Sunny. If it werent for him, no child would master English.
Read more
Helpful
Report abuse
See all reviews

Sheba
5.0 out of 5 stars Great books to promote a love of reading
Reviewed in the United Kingdom on 22 April 2018
Verified Purchase
My son, who has Asperger's, is very, very picky about what he reads. He prefers science to literature and will refuse to read what does not quickly engage him. He absolutely loved this series and, for alas too short a short time, it lured him away from online games. Bedtime stopped being a chore, and he happily curled up with his book.
Read more
Report abuse

Kawie1
4.0 out of 5 stars The Vile Village
Reviewed in the United Kingdom on 11 November 2019
Verified Purchase
I love these and would have adored them as a child. I love the fact that they are a little bit dark and scary.
Read more
Report abuse

Hollie Marsh
5.0 out of 5 stars AMAZING!!!!!!!!!!!
Reviewed in the United Kingdom on 29 August 2013
Verified Purchase
This AMAZING book was "cool" when u read the book you will understand how clever that was but I would not recommend reading book at night it gets really scary. But as I said before just because it's amazing dsnt mean does not mean it left me with so many buzzes and questions. The interesting think about this book is that just because the "orphans" live in V.F.D does not mean that Lemony Snicket gives you the answers to some questions you may have had. Or well at least it did not to me but if you manage to find any clues to what
May become of the Baudelaire s please write a review
Read more
Report abuse

Mrs J
4.0 out of 5 stars Great book
Reviewed in the United Kingdom on 10 May 2013
Verified Purchase
I thought that this book was great because it was unlike many of the other books of this series. This has loads of mysteries like the couplet mystery (you'll find out if you read) and also like in the other books you can almost take part in the mystery. However AGAIN you do not find out what V.F.D means!! Which is probably what lemony snicket was aiming for but it is a bit annoying. Overall I think that this is a great book that you should definitely read but obviously start from the beginning of the series! Hope that helped.
Read more
Report abuse
See all reviews
Back to top
Get to Know Us
Connect with Us
Make Money with Us
Let Us Help You
EnglishChoose a language for shopping.
© 1996-2021, Amazon.com, Inc. or its affiliates