Up and Down and over 2 million other books are available for Amazon Kindle . Learn more
Share
Have one to sell?
Sell on Amazon

Flip to back Flip to front
Listen Playing... Paused   You're listening to a sample of the Audible audio edition.
Learn more.
See all 8 images 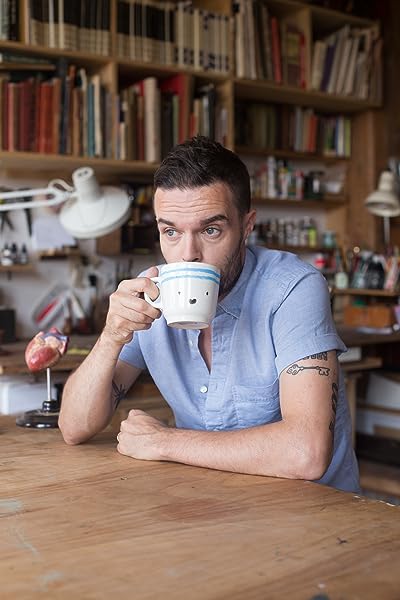 "Visually witty, poignant and spare, it is sure to stoke the author's huge popularity" Culture, Sunday Times

"Jeffers's minimalist style enhances this touching and funny story about friendship, and even though the illustrations are so spare, they convey beautifully the emotions of the characters and contain little details which children will love" School Librarian

"A lovely story about friendship and caring" The Independent on Sunday

Oliver Jeffers graduated from The University of Ulster in 2001 with First Class honours. His outstanding talent has been recognised by several high-profile awards, including the Nestlé Children’s Book Prize Gold Award. ‘Lost and Found’ animation was broadcast on Channel 4. Oliver lives and works in Brookyln, New York.

Start reading Up and Down on your Kindle in under a minute.

4.7 out of 5 stars
4.7 out of 5
428 global ratings
How are ratings calculated?
To calculate the overall star rating and percentage breakdown by star, we don’t use a simple average. Instead, our system considers things like how recent a review is and if the reviewer bought the item on Amazon. It also analyses reviews to verify trustworthiness.

Nitya Anand
4.0 out of 5 stars Down is Better, Little Penguin!
Reviewed in India on 28 September 2014
Verified Purchase
My son is already in
love with Oliver Jeffers' Lost and Found. The characters
are the same in this book, so he easily began
liking this story.

The penguin and the boy are friends, a continuation of
a relationship that began in Lost and Found.
For unknown reasons, the penguin wanted to fly high
in the sky. To pursue his dream of flying, he left the boy
and went to a circus. He was made a cannon ball there
and was shot in the sky. His friend reached there in time
and caught him, preventing a probable end of the penguin's
earthly life.

All ends well back in the boy's home, both playing their
favourite board game!

Anuradha Gupta
5.0 out of 5 stars Perfect to introduce friendships to young kids.
Reviewed in India on 26 June 2020
Verified Purchase
A heart warming tale of friendship which my 2y old loves listening to. Like other Oliver Jeffers' The Boy books, this one too has illustrations on similar lines along with a moral message. Simple story and easy to read and explain to young toddlers.
Read more

Preeti Sharma
5.0 out of 5 stars Lovely book, less text more visuals
Reviewed in India on 26 June 2019
Verified Purchase
Perfect for the age 2.5 and above. My daughter loves this book and prefers reading this at least twice a day.
Read more
2 people found this helpful
Helpful
Comment Report abuse

jgauntt
4.0 out of 5 stars Great story
Reviewed in India on 23 January 2015
Verified Purchase
Darling book. Oliver Jeffers does not disappoint. Make sure you check out the size of this book. It is unusually small for a children's picture book. This suited me well, but may not be what you are looking for.
Read more
One person found this helpful
Helpful
Comment Report abuse

AJ
4.0 out of 5 stars Amazing book but priced high
Reviewed in India on 7 February 2020
Verified Purchase
It's nice book priced high . Once read you can edit and make many versions of the story with your imagination .
Read more
Helpful
Comment Report abuse

Navaneetha Sasikumar
2.0 out of 5 stars So So
Reviewed in India on 3 September 2020
Verified Purchase
Narration is not simple like previous books. Still good to explain concept of friendship.
Read more
Helpful
Comment Report abuse
See all reviews

P
4.0 out of 5 stars Beautiful but not as magical as other Jeffers books.
Reviewed in the United Kingdom on 1 April 2017
Verified Purchase
I have all four of these books now - my son was given Lost and Found and The Way Back Home for his first birthday and has just started enjoying them (wanting to read them over and over again!) at 17 months. This one arrived today and has the same lovely illustration. However, I'm a little less excited about the story, which is essentially about a penguin wanting to fly. I found the other stories a wonderful take on friendship and working together but I found this one slightly less magical. We'll see what our son makes of it tomorrow though!
Read more
Report abuse

gusty123
5.0 out of 5 stars GREAT addition to your child's library, it's clever, funny and heart-warming!
Reviewed in the United Kingdom on 3 January 2016
Verified Purchase
A wonderful book for a young child, we've read it so many times, it's lovely and heart-warming. Only a bit too basic for my nearly 4 yrs old, but every child is different (we have been reading 5-10 books every evening since she was two so perhaps that's the reason why she needs more complex stories!). I will definitely keep this book for my children and grandchildren, it's a classic and is clever, funny and heart-warming just as you would expect from the author! <3
Read more
One person found this helpful
Report abuse

CloselyObservedEnglish
5.0 out of 5 stars Perfect for all ages
Reviewed in the United Kingdom on 10 February 2018
Verified Purchase
I love everything that Oliver Jeffers has ever produced. His work has a unique style, is joyous to behold, is full of life and love, and teaches important lessons that my children readily appreciate. Of all the kids books I've read to my daughters in the past five years, his are easily the most beautiful.
Read more
One person found this helpful
Report abuse

PB Ireland
4.0 out of 5 stars Another great Oliver Jeffers book
Reviewed in the United Kingdom on 10 March 2014
Verified Purchase
Up and Down is a beautifully painted story about the Boy and the Penguin (who first met in Lost and Found) and the Penguin's attempts to fly. My 2.5 year old loves this book and it is a gentle and touching story about friendship.
The narrative does not flow quite as well as any of the earlier books in the series (Lost And Found, The Way Back Home and How To Catch A Star), but is still a wonderful charming book.
Read more
One person found this helpful
Report abuse

Ana Da Silva
5.0 out of 5 stars The story is simple and beautifully told
Reviewed in the United Kingdom on 13 June 2013
Verified Purchase
There was once a penguin who decided it wished to fly. It did have wings afterall! Not a novelty starting point, but the drawings and the story are told with such sweetness and coziness that you will love it as much as your little one. Best part, for me, besides the visual appeal, is that it is easy for even very young children to follow along and react to specific points or sentences of the story, repeating words or parts of it. Easy to create interaction while reading it out loud.
Read more
One person found this helpful
Report abuse
See all reviews
Unlimited FREE fast delivery, video streaming & more
Prime members enjoy unlimited free, fast delivery on eligible items, video streaming, ad-free music, exclusive access to deals & more.
> Get started
Back to top
Get to Know Us
Connect with Us
Make Money with Us
Let Us Help You
EnglishChoose a language for shopping.
© 1996-2020, Amazon.com, Inc. or its affiliates