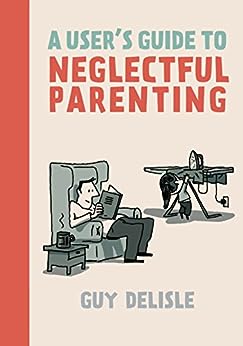 “A User's Guide to Neglectful Parenting is a funny and truthful book about being a parent.” ―Boing Boing

“You don't have to be a parent to enjoy Guy Delisle's whimsical graphic novel.” ―NOW Toronto

“A User's Guide...shares with [Delisle's] previous work a keen appreciation for the clash of cultures; this time, however, the cultures in question are those of adults and children, and the damage that ensues is played for a rueful laugh.” ―NPR

Guy Delisle spent a decade working in animation in Europe and Asia. His 2012 book, Jerusalem: Chronicles from the Holy City, won the highest prize in European cartooning, the Fauve d'Or, at the Angoulême International Comics Festival. He lives in the south of France with his wife and children.

4.1 out of 5 stars
4.1 out of 5
35 global ratings
How are ratings calculated?
To calculate the overall star rating and percentage breakdown by star, we don’t use a simple average. Instead, our system considers things like how recent a review is and if the reviewer bought the item on Amazon. It also analyses reviews to verify trustworthiness.
Top reviews

Sam Quixote
4.0 out of 5 stars Cartoonish parenting
Reviewed in the United Kingdom on 8 July 2013
Verified Purchase
Guy Delisle takes a break from his usual travelogue comics to produce a highly amusing look at being a dad, specifically his parenting style towards his young son and daughter. The stories range from Delisle's shortcomings as a dad to his mischievous nature trumping his paternal instincts - all stories which are almost all hilarious.

One of the stories shows Delisle forgetting to put a coin under his son's pillow when his tooth falls out - for 3 nights in a row! - and having to make up a story about why the mouse (in Delisle's household, or maybe Canada generally, there's no tooth fairy but instead there's a tooth mouse) kept forgetting. Later on he plays a practical joke on his son, using a chainsaw to chop up a dead tree in their backyard and then, to grab his son's flagging attention, pretends that the chainsaw cut his hand off, leading to his traumatised son running indoors screaming!

One of my favourites is at bedtime his daughter asking him to reassure her that baby snatchers aren't real, which of course he does. And then he goes on about a newspaper story he read earlier where a monkey in Malaysia stole a baby and leapt out of the apartment window, says goodnight and walks off, leaving his daughter completely wide awake and scared. Or when his daughter brings him a drawing she made and Delisle ends up critiquing the hell out of it, telling her she'll never win an Eisner (the comics industry Oscars) and ending with Delisle ranting about hack artists in the comics industry.

It might seem like he's a cruel dad but you get a strong feeling from the book that he deeply loves his kids and that he just likes playing around with them for his own amusement - and our own of course. His abilities as an animator make the stories paced perfectly so that they read fluidly and while it seems like I've spoken a lot about the content, believe there's a lot more here and reading it from Delisle rather than myself is a very different experience. I love his travelogues - and if you're new to Guy Delisle check out his book on North Korea, "Pyongyang", or last year's "Jerusalem", for excellent reads - but "A User's Guide to Neglectful Parenting" shows Delisle's talents easily transfer to the domestic stage creating a funny, quite brilliant book that all comics readers will enjoy, parents or not.

y-fly
3.0 out of 5 stars Nice but disappointing
Reviewed in the United Kingdom on 30 December 2015
Verified Purchase
Enjoyable, but having read his excellent Journey in North Korea, this was disappointingly insubstantial. Well observed, with a few good insights and laughs, but not much there. You'd be happy to read a few of these strips in a newspaper, but poor value for money at the best part of a tenner.
Read more
One person found this helpful
Report abuse

Ms. A. Cheetham Wilkinson
5.0 out of 5 stars Insightful wit
Reviewed in the United Kingdom on 2 August 2014
Verified Purchase
Bought for a pair of non-neglectful but struggling parents who found plenty to laugh at over Christmas.
Read more
2 people found this helpful
Report abuse

Sionix
3.0 out of 5 stars Three Stars
Reviewed in the United Kingdom on 10 August 2015
Verified Purchase
A good chortle, although you'd read it in 10 minutes
Read more
4 people found this helpful
Report abuse

Amazon Customer
5.0 out of 5 stars Funny book.
Reviewed in Canada on 12 February 2018
Verified Purchase
I bought it as a gift for a friend who will soon become a parent. But I also read it myself before gifting, and it was hilarious and lots of fun.
Read more
Report abuse
See all reviews
Back to top
Get to Know Us
Connect with Us
Make Money with Us
Let Us Help You
EnglishChoose a language for shopping.
© 1996-2021, Amazon.com, Inc. or its affiliates