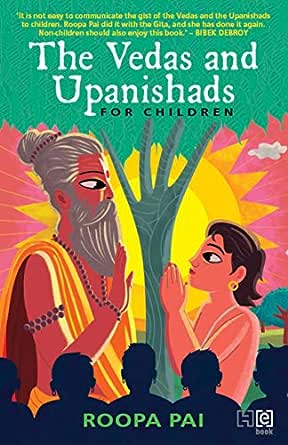 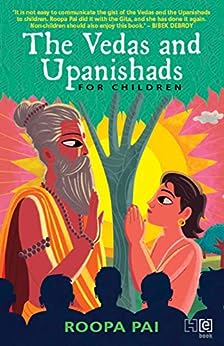 The Vedas and Upanishads for Children Kindle Edition

ROOPA PAI is the author of several books for children, including the much-acclaimed, award-winning bestseller The Gita for Children. Her books, on topics as diverse as history, mathematics, science, economics and sci-fi fantasy, are enjoyed by adults just as much as they are by children.

Of all the Mahavakyas in the Upanishads, her favourite is 'Prajnanam Brahma - Knowledge is God'. --This text refers to the paperback edition.

4.5 out of 5 stars
4.5 out of 5
363 global ratings
How are ratings calculated?
To calculate the overall star rating and percentage breakdown by star, we don’t use a simple average. Instead, our system considers things like how recent a review is and if the reviewer bought the item on Amazon. It also analyses reviews to verify trustworthiness.

Andy
5.0 out of 5 stars Not just for children...
Reviewed in India on 26 January 2019
Verified Purchase
I had never thought that book titles could be misleading in such a delightful way. Roopa Pai’s ‘The Vedas and Upanishads for Children’, which is a worthy successor to her bestselling “The Gita for Children”, is a wonderful and enriching read not just for children (as the title suggests), but for adults too!

Here Pai undertakes the onerous task of decoding for young readers some of the oldest, and most significant, of Hindu scriptures: the Vedas - and the Upanishads, which are embedded in the Vedas. This is a significant challenge, considering that these scriptures contain complex philosophical themes and concepts. Pai takes on the challenge in splendid fashion, masterfully combining scholarly research with deep experience of writing for young people. The result is a book that not only provides a high level understanding of these scriptures, but also introduces the reader to many of the key tenets of Vedanta philosophy.

Pai’’s writing style is easy and conversational, and her language, contemporary. Consequently, the book never feels dull or heavy and will likely strike an instant chord with readers of all ages. Further, Pai weaves in many interesting stories, facts and pop-culture references which make the text fun.

This is a wonderful introduction to the Vedas and Upanishads for young readers and their parents. It is easily one of the most accessible books on this somewhat esoteric subject. One of the “must read” books of 2019!
Read more
50 people found this helpful
Helpful
Comment Report abuse

Hayagreev
1.0 out of 5 stars An appeal to the publisher.
Reviewed in India on 16 January 2019
Verified Purchase
****This review is JUST about the awful print quality****

I bought this book as I already read The Gita for children by the same author, which I loved reading. That was a great reading, both content wise and the printed quality wise. But in this book, the content is so good so far, but the print quality is awful. Why you reduce cost in printing? The letters shall be bit more darker. Please correct it in the future prints. Please see the attached picture. Left side is the new book and the other one is The Gita.

About the writing, I would say 5 stars would not be enough. It is not just for children. I am a father of two and I love it.
Read more

Tara
5.0 out of 5 stars Brilliant contemporary representation of ancient texts
Reviewed in India on 24 January 2019
Verified Purchase
To be able to read complex tomes, absorb their essence, and render it in an accessible manner that is appealing and relevant to an audience that is encountering the ideas for the first time is practically an impossible task that Roopa Pai achieves with a spontaneity that I can only attribute to sadhana in previous lives, not just this one.

I am amazed by the insight that her writing of the Vedas and Upanishads reveals. For example, take the introductory preface, Before We Begin. In her astute categorisation of which kind of reader you may be - the agree-r, the disagree-r, or the one sitting on the fence, and the response of the sages to each (which is equal parts welcoming, thought-provoking and stimulating), she has defined the completely open, non-judgmental, non-didactic nature of dialogue in the Upanishads.

This sets a general background to these texts that can otherwise be utterly misinterpreted in different political contexts. The openness and universal appeal of these texts emerges powerfully in Roopa's telling, and is a great service she has rendered to all of us, adults and children in the present, and to future generations. A service to our heritage and to humanity that involves 'roadmaps' and keys to living joyfully and in harmony.
Read more
25 people found this helpful
Helpful
Comment Report abuse

Harshit Sharma
3.0 out of 5 stars Worth every rupee but there are a few catches
Reviewed in India on 15 June 2020
Verified Purchase
This book is undoubtedly one of the most eye-opening things I have ever come across. Due to my ignorance, I always assumed the Vedas and the Upanishads to be a set of religious commandment just like the Quran & Bible are. But they are so not!
So, read this book as an explanation of an age-old text
THINGS I LOVED:
Easy-going, frank, and cool way that the writer has used make it more appealing
The drawings alongside are just a cherry on top
THINGS I DISLIKED:
The author has, for reasons best known to her, believed the Aryan Invasion Theory to be a reality. This theory-and, it is called a theory for this very reason-has never been backed by any proofs. A 2-crore cash prize is still up for grabs to anyone who can prove its validity. Sad. Dr. Ambedkar, himself, denounced and rejected this European theory.
Further, due to the AIT, all the dates of the vedas and upanishads are incorrect. But ignore the dates, go for the content.
The forced portrayal of ShahJahan as some great guy who wanted to know more about these texts and how he documented them is WRONG. he did so, to smuggle knowledge out to his arab world, not due to his secularism (which again he lacked dearly!)
There is undeniable proof that 27 Rishikas (female sages) were part of the team of the enlightened ancients who wrote these very Vedas and Upanishads. And yet, the author tells the readers that women were not allowed to read these texts. Isn't that quite silly?
CONCLUSIONS:
I say this again, there are portions of this books that just hit the nail on its head perfectly and WILL touch your inner core. You MUST read this but with a grain of salt.
Owing to the minor flaws, I wouldn't recommend this book directly for kids. They are too susceptible to decipher the flaw and the fact. But you as a parent can go through this and filter, after doing your own fact-checking, the stuff.
For someone who is not a historian, I commemorate the author. These flaws occur. It's not a big deal. But the author at least prodded me on a hunt to dig facts, for this reason alone I think I will be buying her version of Gita as well.
Thanks Amazon for the blazing delivery and the secure packaging!
Read more

priya
4.0 out of 5 stars Simple language but bad quality paper.
Reviewed in India on 9 February 2019
Verified Purchase
Great book to read for people above 15 years but the print quality in extremely bad considering it's a reputed printing organization
Read more

Oshin Tiwari
5.0 out of 5 stars A good read for an adult as well
Reviewed in India on 31 May 2020
Verified Purchase
If you seek peace amidst chaotic surrounding or you simply want to look inside yourself with a hope to improve, then this book is for you. The second section describing the 10 upanishads and 'lessons to learn' are very insightful.
Read more

AHWappat
5.0 out of 5 stars Not just for children
Reviewed in the United Kingdom on 1 March 2020
Verified Purchase
Loving this. I’m a Religious Studies teacher and this book is giving me so many ideas of how to make the scriptures accessible for young people. Definitely suitable for adults as well as older children.
Read more
Report abuse

Jack
5.0 out of 5 stars Excellent introduction to V&U
Reviewed in the United Kingdom on 19 April 2020
Verified Purchase
All the wisdom of the ancient sages condensed in a beautifully written book. I strongly recommend for children and adults alike.
Read more
Report abuse

Marutheesh Krishnamurthy
5.0 out of 5 stars Excellent
Reviewed in the United States on 26 October 2019
Verified Purchase
Excellent for both children and grownups, alike. Thank you for excellent books and pray many many more are published soon.
Read more
2 people found this helpful
Report abuse

Legendary Trini
5.0 out of 5 stars This book is an excellent insight into the Vedas and Upanishads.
Reviewed in the United States on 7 September 2020
Verified Purchase
This book is excellent introduction and also an ever lasting reference to understanding the Vedas and Upanishads. This books is ideal for all ages. It is truely an inspirational book and forms a bridge for tackling these scriptures, which at times can seem like a daunting task, but the book summaries important aspects in a very effective way.
Read more
Report abuse

bibliophilic
5.0 out of 5 stars Simple and Clear explanation to a complex subject
Reviewed in the United States on 1 June 2020
Verified Purchase
The whole topic is so well researched and explained so well. I understand it so much better and can now explain it to my non Hindu friends
Read more
Report abuse
See all reviews
click to open popover
Unlimited FREE fast delivery, video streaming & more
Prime members enjoy unlimited free, fast delivery on eligible items, video streaming, ad-free music, exclusive access to deals & more.
> Get started
Back to top
Get to Know Us
Connect with Us
Make Money with Us
Let Us Help You
EnglishChoose a language for shopping.
© 1996-2020, Amazon.com, Inc. or its affiliates